A Comment on the European Convention on Human Rights

By Peter Boeuf, Chair of the Centre for Human Rights and Social Equality 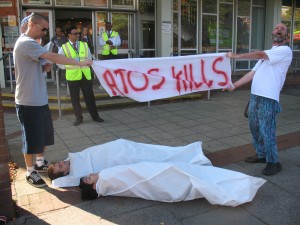 Demonstrators protest Atos, the company contracted by the Tory government to kill off the sick and disabled. Adherence to the European Convention on Human Rights hasn’t done much to help victims like Tim Salter (pictured below).

In the aftermath of World War II Governments began to reflect on the innumerable atrocities that had been witnessed principally but not exclusively at the hands of Nazi Germany over the preceding years and the extent to which ordinary human beings from whatever racial or ethnic background had been treated with a complete absence of respect. At a philosophical level this led many to contemplate what were or should be the minimum standards of life to which all men and women should be able to aspire.

The Convention heavily influenced by the drafting of British lawyers was reduced into treaty form by the Council of Europe in 1950; and in 1951 the UK government ratified the treaty, accepting the nation’s commitment to upholding the basic rights set out in the Convention. Broadly speaking there are 17 rights which those subject to British jurisdiction enjoy (including the right to life; the prohibition of torture, inhuman or degrading treatment; the prohibition of slavery; the right to liberty and security; the right to a fair trial etc. etc.). In order to ensure the Convention on Human Rights was followed, a European Court of Human Rights with judges appointed from each country represented on the Council of Europe was established as a court of ultimate authority touching upon Convention issues and based in Strasbourg. Thus any individual with a dispute, having exhausted all legal avenues open to them domestically could apply to the Strasbourg court for a final determination of the issue.

Between 1951 and 1998 the UK courts paid little heed in their deliberations to the Convention, though the Government was obliged to consider the judgements of the European Court of Human Rights with care and where necessary was obliged to implement its judgements by taking steps administratively or even by legislation. Generally speaking this arrangement did not prove in the least controversial, though judgements in relation to the treatment of detainees in Northern Ireland and indeed in relation to the killing of alleged Irish terrorists in Gibraltar produced judgements against the UK government.

In 1998, the newly elected government in the UK turned its attention to the Convention and decided that far from relying solely on its Treaty obligations the UK should enshrine its commitment to human rights by incorporating the Convention in primary legislation through the Human Rights Act 1998. The main provisions of that Act came into force on 2nd October 2000. From that date forth the provisions of the Convention were incorporated fully into British law. Thus the British courts of law in determining any issue raised in argument before them had to consider the implications of any decision to ensure that it was consistent with the terms of the original Convention, even if this meant ignoring existing legislation.

To illustrate the point and to use a simple and highly hypothetical example, imagine that an Act of Parliament, ‘The Torture Enablement Act’, amongst its provisions sanctions the use of torture against arrested suspects in order to obtain confessions. This is clearly contrary to Article 3 of the Convention (prohibition of torture) and courts and other public authorities would have to accept the primacy of the Convention over domestic law. In many respects the incorporation of the Convention into domestic law merely represented a streamlining of the system because whereas before the courts could at first instance ignore the Convention and leave it to the European Court of Human Rights in Strasbourg to determine human rights issues should someone affected by the court’s decision have the resources available to appeal to that body, now all public authorities and courts have to consider human rights issues from the outset. (In spite of these public authorities having to abide by Convention rights from the outset, ultimately there still remains the right to appeal to the European Court).

This has meant that many more decisions have been made in the domestic courts based on the Convention, some of which in the eyes of those who oppose the Convention have been contentious. Other decisions made by the Strasbourg court have also proved contentious (e.g. the right of prisoners to vote in elections). It is of course in the nature of life and litigation in particular for decisions from time to time to go against one, at which point one usually accepts that there is another point of view or more dramatically throws one’s toys out of the pram in a fit of pique! It is against this background that many who have concerns about our membership of the European Union confuse the nature of the European Court of Human Rights and see the Human Rights Act 1998 as just another example of the supposedly deleterious influence of European Union membership. To make this absolutely clear, if the June 2016 referendum resulted in the UK leaving the European Union, it would not automatically mean that the UK was free of its commitment to the European Convention on Human Rights and to the European Court of Human Rights. To withdraw from those commitments- however embarrassing that would be to Britain’s standing in the world – would require quite separate legislation.

In assessing the validity of the arguments of those who advocate abandoning our Convention commitments it is as well to consider how antipathetic the European Court of Human Rights has been to British ideas. In his engrossing article in the Times (5th May 2016) Lord Pannick Q.C. cites the fact that in 2015 the European Court gave judgement in 823 cases. A mere 13 covered cases involving the UK. Of those 13 cases, the Court found in favour of the UK in 9 (69%). To put these figures into even greater context, the Court heard 116 cases emanating from the Russian Federation of which the Russian authorities were successful in a mere 7 – a success rate of 6%. Again, Turkey lost 79 out of 87 cases – a success rate of 9%. Of course every decision touching on the rights of man is vastly important but without at all being complacent there is perhaps some room for a small amount of pride in our commitment thus far to abide by the Convention. 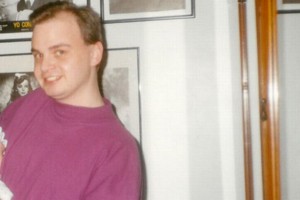 Victim, Tim Salter. There is very small room for pride in Britain’s supposed adherence to the Convention: microscopic, in fact.

In fairness those who advocate the UK ditching its Convention commitments are not averse to the notion that society should so govern itself that certain basic rights are maintained and to that end suggest the replacement of the Convention by a Bill of Rights (applicable to the UK) which apparently the Ministry of Justice are in the course of drafting. How much different from the Convention this will be remains to be seen, especially against the fact that the current Attorney-General within the last few days speaking in the House of Commons on behalf of the Government stated, “we have no objection to the text of the Convention; it is indeed a fine document.” As Lord Pannick Q.C. suggests in his Times article, why then the need to change it? It is tempting to suggest that the only difference that is likely to come out of any reform is to promote the primacy of the British domestic courts to determine our responsibilities rather than the European Court in Strasbourg, but the arguments against the existing Human Rights Act 1998 have thus far been lacking in coherence and developments are awaited with a degree of anxious anticipation.

That said, it would be foolish to argue that all is well with the European Court of Human Rights. Even a senior member of our own Supreme Court of Justice has questioned the background and experience of some of the judges, suggesting that perhaps some of the member nations appointing their representatives to the Court have not treated the matter with the seriousness it deserves. We do not of course live in a perfect world but if some sort of reform is required should we not be advocating such reform and canvassing support for those reforms from other member states rather than apparently throwing our toys out of the pram?

For those interested in a very humorous but highly pertinent critique of the government’s current position on the Human Rights Act 1998, reference should be made to the Monty Python inspired “What did the European Convention on Human Rights ever do for us?” available on line at www.youtube.com.