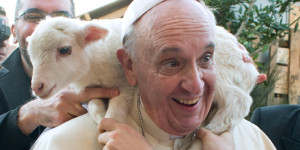 Pope Francis with a terrified lamb on his shoulders.

In recent weeks, I have been part of a haphazard and ad hoc process to compose an open Letter to Pope Francis in advance of his visit to the United States in September. The promotion of this letter has been taken up by Friends of Franz Jagerstatter, a community of peacemakers inspired by the Austrian Catholic farmer who was martyred for his refusal to fight in the German Army during World War II.

Pope Francis’ recent comments regarding war, the environment and economic justice inspire our letter, which cites segments of his new encyclical, Laudato Si. “War always does grave harm to the environment and to the cultural riches of peoples,” Pope Francis writes, “risks which are magnified when one considers nuclear arms and biological weapons.” In the light of this reality, our letter suggests that Pope Francis avail himself of the challenging opportunity to acknowledge that the United States is “the most prolific polluter and, not coincidentally, the greatest war-maker on the globe.”

Encouraged by his naming the mass killing of Armenians by the Ottoman Turks one hundred years ago, “the first genocide of the 20th century,” our letter begs Pope Francis “to speak out just as clearly and (to) publicly denounce the terrorism and genocide that your host country, the United States, is even now inflicting on the Muslim and Christian Arab people of the Middle East and the people of Afghanistan,” and it states that “decades of aggression including sanctions, bombings, invasions, arming of insurgents, have left millions dead, many more millions displaced and homeless. Thousands have been imprisoned and tortured. Many lands are being made desolate and poisoned, and ancient communities are being devastated.”

In composing this letter and subsequently seeking individuals and organizations to sign on to this letter, which will appear in a paid advertisement in the September 11 issue of The National Catholic Reporter, the biggest controversy and stumbling block for many is our use of the word “genocide” to describe the terror the U.S. is inflicting on the earth and in Arab and Muslim lands in particular. It is not surprising that this word evokes a strong response.

Since comments and signatures were sought first from among a small set of friends and colleagues in the peace movement, few of these argued that U.S. policy is benign. Some even fear that the language of our letter is too weak to be commensurate to the horror of the present reality. The belief has also been voiced that, while U.S. actions do indeed rise to the level of genocide, the pope’s use of the word to describe Turkey’s policies against the Armenians is an unfortunate overstatement. Some accept that a U.S. genocide is being perpetrated, but warn that speaking this terrible word to people unprepared to hear it is counter-productive, however true it is. 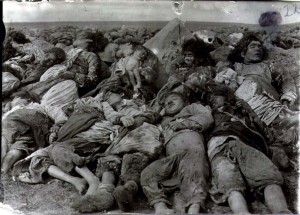 The strongest objections to the use of the word come from those who deny that U.S. war policies are genocidal. While U.S. actions may be violent and illegal, “it is not genocide, as I see it,” or, “not genocide in my opinion,” some tell us. This position reflects a prevalent concept in the U.S. media and in the government and public discourse that the word genocide is subjective, only vaguely defined and malleable, that it can be applied according to one’s opinion or interest. Others cite another popular definition of genocide that covers only deliberate actions aimed at exterminating an entire race.

The word genocide, however, does have a definite legal definition independent of one’s perspective or opinion. It is codified in the 1948 United Nations Convention On the Prevention and Punishment of the Crime of Genocide that says in Article II, “In the present Convention, genocide means any of the following acts committed with intent to destroy, in whole or in part, a national, ethnical, racial or religious group, as such: (a) Killing members of the group; (b) Causing serious bodily or mental harm to members of the group; (c) Deliberately inflicting on the group conditions of life calculated to bring about its physical destruction in whole or in part; (d) Imposing measures intended to prevent births within the group; (e) Forcibly transferring children of the group to another group.”

Some peace activists base their denial of U.S. genocide on their understanding of the Convention’s use of the word “intent”. The stated intention of the sanctions in Iraq between 1990 and 2003, for example, was to apply pressure on the Iraqi government to allow weapons inspectors into Iraq. Because the intent was not to kill Iraqi people in vast numbers, the sanctions were not genocidal, in this view, despite the deaths of millions, including more than 500,000 children under age 5 from August, 1990 to the end of 1995 alone.

Economic sanctions remained in place for seven more years, inflicting merciless punishment on innocent civilians. This theory doesn’t account for the fact that the sanctions stayed in place for years after UN inspectors had repeatedly certified that they found no evidence of a program to develop weapons of mass destruction in Iraq. One correspondent offers that even if the real but unstated reason for the sanctions was to spur the Iraqi people to overthrow Saddam, the intent would still not have been “to destroy, in whole or in part” the Iraqi people. Again this does not account for the U.S. forces allowing Saddam’s military access to helicopter gunships to put down a people’s rebellion after the Gulf War in 1991. 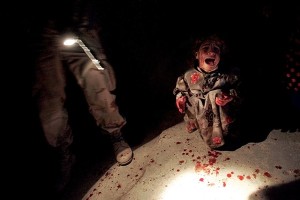 US soldiers traumatising the five-year-old Samar Hassan with a night-raid, after murdering her parents.

Since the war currently being waged is a war against an insurgency and not aimed at a civilian population, some reason that its intent cannot be called genocidal. This does not account for the fact that many of those actually targeted to be killed in drone attacks are not combatants in the first place and that these attacks kill a disproportionate number of “unintended” victims.

These objections are due to a misunderstanding of the word “intent.” Just as the word genocide has a specific legal meaning regardless of popular or personal understandings of the word, so the word “intent” has a definition in domestic and international law that is not the same as what one might use in everyday language. Simply put, intent is not the same thing as motive. The opposite of an intentional result is an accidental one. If a certain bad result of an action can reasonably be foreseen, that bad result is intentional, regardless of the motive. An internationally recognized test of intention says that “when planning their actions, people may be aware of many probable and possible consequences,” so the decision to proceed with a planned action “means that all the foreseen consequences are to some extent intentional, i.e. within and not against the scope of each person’s intention.”

One example that the U.S. Supreme Court decided in 1999, Holloway v. The United States, concerns a carjacking case: “Petitioner’s accomplice testified that their plan was to steal cars without harming the drivers, but that he would have used his gun if any of the victims had given him a ‘hard time.’” The claim that the defendant’s intent was only to steal a car and not to harm or kill its occupants was not accepted by the court. The prosecution does not need “to prove that the defendant had an unconditional intent to kill or harm in all events, but merely requires proof of an intent to kill or harm if necessary to effect a carjacking.”

Millions are dying and nations are being destroyed by recent and current U.S. policy. To accept this as true and still object that these actions are not genocidal because their “intention” is not to kill but only to extend political clout and steal natural resources is to take the part of the carjacker’s accomplice. Of course, the tragic consequences of these policies are foreseen and so they are intentional and they are criminal. As much as they do result in the destruction “in whole or in part,” of “a national, ethnical, racial or religious group,” they are genocidal.

Madeleine Albright, then U.S. ambassador to the United Nations, testified that the lethal consequences of U.S. policy are foreseen and intentional in a 1996 interview on CBS’s 60 Minutes. She was asked by Lesley Stahl, “We have heard that half a million children have died. I mean, that’s more children than died in Hiroshima. And, you know, is the price worth it?” To this Ms. Albright replied: “I think this is a very hard choice, but the price — we think the price is worth it.”

When Pope Francis made his statement about the Armenian genocide on April 12, it was predictably met with controversy and indignation, straining relations between the Catholic Church and the Turkish state in particular. His use of the word to refer to current U.S. policy would necessarily be even more provocative and distressing, but all the more necessary for that fact. “Concealing or denying evil is like allowing a wound to keep bleeding without bandaging it,” the pope said addressing this issue in April. 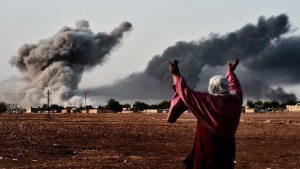 “There were no Catholic chaplains in the Turkish military in 1915” we remind Pope Francis, “and the banners of ISIS are not displayed today in Catholic churches. The U.S. military, on the other hand, is predominantly Christian with one-third of the force Catholic, so that it might be hoped that your denunciation of terrorism and genocide might have a more positive effect here and now.”

LOOKING IN THE MIRROR

Beyond the quibbles about the definitions of “genocide” and “intent,” I believe that there is a deeper reason behind this reticence to call our country’s policies genocide. In 1967, Dr. Martin Luther King, Jr., addressed the need to speak “clearly to the greatest purveyor of violence in the world today–my own government.” This was hard to swallow then, harder even now. Genocide is a horrible word. It is far easier to use it in the context of an accusation, it seems, than in a confession.

Our letter commends Pope Francis for naming the crimes of the (Muslim) Ottoman Turks against the (Christian) Armenians genocide. Since we wrote it, Pope Francis used the word in reference to (Muslim) ISIS brutalities against Christians in areas they control. The word genocide is new, coined only in 1944 in reference to Nazi extermination of Jews. The word needs to be used thoughtfully and judicially, but sometimes it needs to be used. If it is employed exclusively to name crimes that other people commit against us and people like us, and never to name the crimes we and people like us commit against others, then the word genocide is merely a weapon of retribution and it has no potential to heal.

Whether or not the pope gives the proper name to U.S. war policies (as we sincerely hope that he will) it is also important that we in the United States, the Christians among us especially, do not neglect to call genocide by its right name. Our plea to Pope Francis ends with an exhortation from the French existentialist, Albert Camus, “What the world expects of Christians is that Christians should speak out, loud and clear, and that they should voice their condemnation in such a way that never a doubt, never the slightest doubt, could rise in the heart of the simplest person.”

Brian Terrell is lives on a Catholic Worker farm in Maloy, Iowa.