Boat chase on the seas of Okinawa 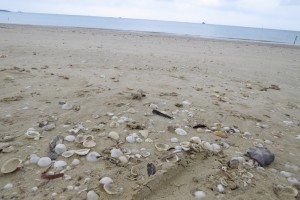 I picked some sea shells at Henoko in Okinawa. Henoko is where the U.S. is relocating their military base against the wishes of 76.1% of Okinawans.

I gave the sea shells as gifts to some of the Afghan Peace Volunteers to help them remember Okinawa’s story. “Hold the sea shells just next to your ears. It is said that you can hear the waves and the stories from the shores of Okinawa,” I began, as I recounted my witness of the nonviolent efforts of ordinary Japanese to end the more than 70 years of U.S. military bases in their midst, including of Ohata being hurt by the Japanese police when he had locked arms with other Japanese in a peaceful sit-in protest at the gates of Henoko base.

Kitsu, an elder monk who organized the Okinawa Peace Walk I was participating in, remarked during a dinner of sticky rice, pickled radishes and seaweed, “Hakim, you remind me of the ‘dugong’!” I was amused to think that I resembled the somewhat strange-looking, endangered manatee that lives on a certain species of seaweed found in the seas of Henoko. Perhaps, it’s only when we realize the similarities we share with creatures like the ‘dugong’ that we can care more about their possible extinction. The dugong’s survival may now hinge on the U.S. government’s ‘full-spectrum dominance’ designs on Asia, as the dugong’s natural habitat is being usurped by the construction of a U.S. military base. I had the privilege of joining a team of scientists and activists who take their ‘Peace Boats’ out daily to the area of sea cordoned off by the U.S./Japanese authorities with orange buoys.

The Peace Boats had flags which read, “ سلام”, meaning “Peace” is Arabic, a word also used by Afghans in greeting one another. I was reminded that the U.S. military bases in Okinawa and Afghanistan serve as launching pads for the same Great Game being played out in Asia. Two elderly Japanese ladies were regulars on the boat, holding signs which said, “Stop Illegal Work”.

I thought, “Who made the U.S. military the ‘legal’ masters over the seas of Okinawa, over the ‘dugong’ whose survival they are threatening?” The U.S. already has 32 military bases on the island, taking up almost 20% of the entire land area of Okinawa.

The cold spray of the waves refreshed me. The soft beat of the drum played by Kamoshita, another organizer of the Okinawa Peace Walk, gave a prayerful rhythm. In the horizon were Japanese canoeists who were also doing their daily protests. 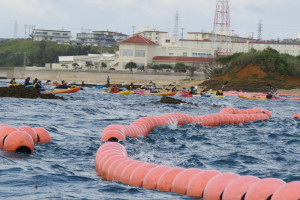 The canoe activists at the orange-buoy cordon. The U.S. military base’s site at Henoko can be seen in the background

The captain of our boat drove the boat across and over the cordon. Boats of the Japanese Coast Guard and the Okinawa Defense Bureau approached and surrounded us. They were everywhere. They filmed us as we filmed them. They issued warnings on their loudhailers. Suddenly, as our boat picked up speed, a Japanese Coast Guard boat gave chase.

I felt as if I was in a Hollywood movie. I couldn’t believe that they were so intensely averse to a couple of old Japanese ladies, a few scientists and reporters and some peace builders! What didn’t they want us to see? Hidden nuclear warheads? What orders were they given by the Japanese and U.S. authorities? 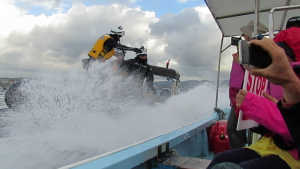 The Japanese Coast Guard ‘chasing’ us

I held my camera steady as their boat seemed to ‘nosedive’ towards us. Bang! Swoosh! Their boat hit the side of ours. Water showered over us. I covered my camera with my Borderfree Blue Scarf, and wondered for an instant if the coast guard would soon be boarding our boat.

I sensed what my Japanese friends felt, that instead of being in Okinawa to protect the people, they are chasing the people off from their own land and seas. I saw a global military machine coming at us on a normalized, business-as-usual excuse of ‘defense’, and I understood the roots of my grandfather’s killing by the Japanese military in World War II. This was merely one of many infringements by the U.S./Japan military on the open seas, oblivious to the ‘dugongs’ and natural life within and around the waters.

Using a magnifier viewing goggle which I placed over the side of our boat, I could see a little of the beautiful coral and its ecosystem. Unfortunately, these may be destroyed by the U.S. military with Japanese tax-payer money, unless the people of the world join Okinawans to say ‘No base! No War!” This is what war, war bases and war preparations do.

They hurt the people. They ignore the seas. 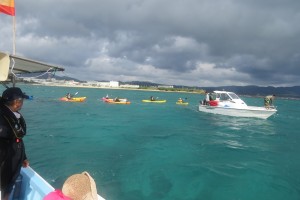 The people of Okinawa and Japan will keep resisting nonviolently. Their struggle for peace is ours.

A full photo essay can be seen at http://enough.ourjourneytosmile.com/wordpress/boat-chase-on-the-seas-of-okinawa/

Hakim, ( Dr. Teck Young, Wee ) is a medical doctor from Singapore who has done humanitarian and social enterprise work in Afghanistan for the past 10 years, including being a mentor to the Afghan Peace Volunteers, an inter-ethnic group of young Afghans dedicated to building non-violent alternatives to war. He is the 2012 recipient of the International Pfeffer Peace Prize.