Book Review: No Glory: The Real History of the First World War 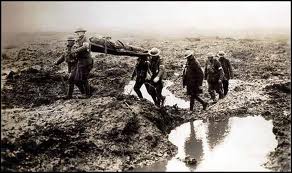 The book not only commemorates the centenary of the so-called Great War, it criticises the British government’s cynical efforts to capitalise on the War in order to justify a bellicose foreign policy in Afghanistan, Iraq, Libya, and elsewhere.

Faulkner begins by quoting Harry Patch, Britain’s last WWI soldier who died in 2009, aged 111. Patch refused to kill, an act which could have seen him hanged for treason. He told Tony Blair that ‘War is organised murder’. His stance on war demanded that the media and political pro-war propaganda lobby devise a subtle strategy, wherein Patch could be presented as an idol for brave men who ‘fought for their country’, rather than as the pacifist he was.

The 2 million who marched on London to protest Blair’s illegal invasion of Iraq represented the majority of Britons who did not support a war which went ahead anyway, emblematic of Britain’s democratic deficit. The recent outrage over Israel’s atrocities in Gaza saw 150,000 take to the capitol. Faulkner draws comparisons to the anti-war movement of the early 20th century, writing that ‘As the [geopolitical] storm clouds darkened in the decade before war broke out, millions joined anti-war protests’.

The background to WWI was inevitably more complicated than revisionist scholars and pro-war media would have us believe, he argues.

The global economy of 1873 to 1896 ‘had been in slump … The proportion of Africa under European rule increased from about 10% in 1876 to more than 90% by 1900’, writes Faulkner, referring to the Scramble. ‘British military expenditure expanded by almost 150% between 1887 and 1914’. This expenditure stood in contrast to Britain’s share of global cotton, coal, and steel revenues, which shrunk. In an effort to force devastated African regions to accept British goods, simultaneously plundering them for export, Britain constructed railways.

Faulkner spends less time on a key issue: Germany’s alliance with the Ottoman Empire in its efforts to secure a railroad and the oil of the Middle East.

As Deutsche Bank invested in Constantinople and Krupp, Loewe, and Kiel supplied the Sultan’s forces with artillery, guns, and torpedoes, Britain strengthened its alliances with Arab despots.

‘Instead of waiting … until the Ottoman Empire finally broke up, … Germany would aim to take over Britain’s traditional role of propping it up’, writes Patrick Hopkirk.1 Germany soon outshone Britain as Europe’s largest steel manufacturer. After rejecting a British offer to carve the Ottoman Empire between themselves, Keiser Wilhelm’s staff authored The Natural Resources of Asia Minor. Mesopotamia (Iraq) was a big prize. Germany sought to extent its Berlin-Balkans-Constantinople railway to Baghdad.

German spies posed as archaeologists and reported ‘even greater opportunities for profit than the rich oilfields of the Caucasus’. Between 1899 and 1906, the Wonckhaus corporation opened offices in Bahrain, Bushire, Basra, Mohammera, and Bandar Abbas, undermining Britain’s monopoly. ‘[M]any people in Britain were beginning to realise that sooner or later an armed showdown with Germany was inevitable’. The Russians, too, feared Germany’s hegemony over Constantinople, ‘their sole exit from the Black Sea and which they had so long coveted’, writes Hopkirk.

The major powers divided into Central (Germany, Austria-Hungary, Turkey, and Bulgaria) and Entente (Britain, France (two powers which had nearly battled over Sudan), Italy, and Serbia, followed by Greece and Rumania).

As tensions grew, the Hapsburg’s Austro-Hungarian Empire began to collapse; a point which Faulkner covers convincingly. He writes, ‘Bohemian miners and Viennese workers fought pitched battles with police as they struggled to build trade unions’. Today, unions express support for the oppressed in Palestine, Iraq, Colombia, and elsewhere, illustrating the international solidarity of the oppressed working-classes who undermine elite interests.

Between 1906 and 1914, Hapsburg hawk General von Hotzendorf ‘pressed for war against Serbia – ‘this viper’ – 25 times’. The chance came when, on 28 June 1914, Hapsburg Archduke, Franz Ferdinand, was assassinated by Bosnians and Serbs seeking to ceded Hapsburg-ruled regions to Yugoslavia. One month later, Austria declared war on Serbia. The Tsar ordered a troop mobilisation to defend its Balkan interests against Austria. Germany declared war on Russia in response. On 4 August, Britain declared war on Germany.

The pamphlet ends with the observation that ‘imperialism, militarism, and nationalism are the mass killers of an insane world’; as well as a copy of an open letter to the Guardian signed by politicians, peers, scholars, and entertainers: ‘this was a war driven by big powers’ competition for influence around the globe, and caused a degree of suffering all too clear in the statistical record of 16 million dead and 20 million wounded’.

The choice of the Guardian is interesting, given the admission of its then-chief editor, Liberal MP C.P. Scott, in a private meeting with PM David Lloyd George: ‘If people really knew [the horror], the war would be stopped tomorrow. But of course they don’t know, and can’t know. The correspondents don’t write and the censorship wouldn’t pass the truth. What they do send is not the war, but just a pretty picture of the war with everybody doing gallant deeds’.2 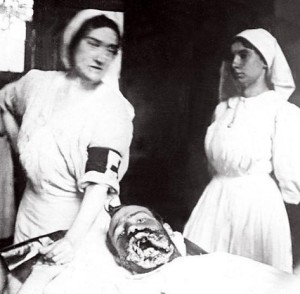 1. On Secret Service East of Constantinople: The Plot to Bring Down the British Empire, 1994, London: Hachette.