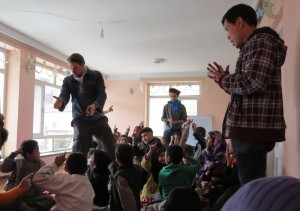 Here in Kabul, over breakfast with Afghan Peace Volunteers, or APVs, we easily recalled key elements of the conflict resolution and peer mediation “train the trainers” workshops that Ellis Brooks, with Voices for Creative Nonviolence UK, had facilitated a week ago. The APVs are a grassroots group of ordinary multi-ethnic Afghans seeking a live of nonviolence.

Peer mediators make “promises” before beginning a session: We won’t tell you what to do, we won’t take sides, and we won’t talk about this session with anyone outside of our room. While pouring tea and breaking bread, we recalled the hand signals Ellis gave us to help remember each promise.

Children at the Borderfree Street Kids School were also taught the peer mediation skills. I’m guessing that the street kids who work to supplement their family income can easily recall what Ellis taught them. They played games to show the importance of listening, and they learned to avoid blaming, exaggerating and “mind-reading” when mediating a dispute.

I watched the little children work in small groups to assemble cartoonized images of two donkeys, tied together, pulling against each other while heading for two heaps of food located in opposite directions. Each group succeeded, working together, in arranging the images so that the classic yet timely story ended with the two donkeys having figured out that they could both approach each pile, both be satisfied and both feed themselves, first at one pile and then the other. To reinforce the story, Ellis called on Ali and Abdulhai, two of the APV teachers, to role play being the donkeys, using Ellis’s scarf as the tie to bind them. Hilarity filled the room as the children advised their beloved “donkeys” about how to achieve a win-win solution.

We laughed this morning, recalling the scene. But I can’t help but worry that most of our younger friends are not very likely to be chatting about the workshop while enjoying fresh, warm bread and a second round of tea in a relatively secure setting. Many of them live in refugee camps. Their families don’t have money to buy wood for fuel, and they often share meals of stale bread and tea without sugar.

It’s troubling to see how easily the children identified with a scenario the APVs helped Ellis develop, which would become the grist for analyzing conflict resolution and mediation. The story, as told by one of the child disputants in the role play, presents a grievance: Every morning, Nargis, a little girl, begs for bread at a certain set of homes, and when she is done she usually has acquired about 10 pieces of bread. She accuses of Abdullah of going to those houses to get bread before her. She says that Abdullah stole her bread, that he is a thief and not to be trusted. Abdullah says that he had no idea that he couldn’t approach the same houses, and that he only got one piece of bread for his family. He says that Nargis is greedy and selfish, and that he would even have shared the bread if she didn’t shame him before others and for some reason call him a thief.

Ellis guided the children through efforts to tell the story without including any exaggeration, blaming or “mind-reading,” as a skilled mediator would do. Using the image of peeling layers of an onion, he helped everyone identify what happened, what the disputants thought, how they felt, and, so importantly, what they needed. The stark reality in the role-play was that both Nargis and Abdullah fear hunger and need bread.

They want to bring some measure of security to their families, and the idea of returning empty-handed can inspire anxiety, rage and even panic. I felt a bit of relief in knowing that the 100 child laborers participating in The Borderfree Street Kids School are each given a donation of beans, flour, cooking oil and rice, once a month, to compensate for what they would have earned working on the streets of Kabul while they now attend school. It’s very good to know that each child has been given warm clothing to help them through the coming winter.

Yet it is estimated that there could be up to 60,000 child laborers in Kabul alone. What shall we conclude about the others? What about their experiences of

Ironically, while Ellis was in Kabul, the U.S. Embassy had issued high level alerts warning westerners in Kabul to stay home because of an anticipated imminent attack. Ellis, tall and fair, could easily be spotted as a westerner, while walking the short distance between the APV live-in community and their Borderfree Center where APV gatherings are held. He acknowledged that some of his family and friends were highly fearful about his visit to Kabul. “Have you gone mad?” some asked.

But, during the workshops, the lively, engaging activities quickly displaced concerns about security and possible attacks. Ellis was paired with Dr. Hakim, whose translation and interpretation were superb. The two of them deftly gained respect and full cooperation.

Later in the week, as I began to learn about rising fear and insecurity following the attack in San Bernardino, California that killed 14 people, I wondered how Ellis’s guidelines could affect people in the United States. Suppose that media, educators, faith-based and civil society leaders cooperated to educate people about the dangerous harm caused by language that labels all Muslims as suspect, exaggerates the threat to people’s daily lives in the United States, and reads the minds of Muslims claiming that all of them harbor hatred toward the United States. Suppose that it was commonplace for people in the United States to ask what fears and needs inspire antagonism toward their country. Suppose the media gave daily coverage to the sobering reports of U.S. attacks against civilians in other countries, most recently in war zones where the civilians have been routinely bombed and maimed, destroying their homes and causing millions to flee the consequent breakdown of civil society.

Before leaving, Ellis thanked the APVs for welcoming him, even though interventions by his country and others have made Afghanistan less safe and less free. He said he had learned, while here, about a strong capacity not to give up on basic rights, especially the right not to kill, the right to care about the planet, and the right to seek equality between people. “Thank you,” he told all of the students, “for being my teachers.”

Kathy Kelly (Kathy@vcnv.org) co-coordinates Voices for Creative Nonviolence (vcnv.org). While in Kabul, she is a guest of the Afghan Peace Volunteers (ourjourneytosmile.com)