By the time I leave Kentucky’s federal prison center, where I’m an inmate with a 3 month sentence, the world’s 12th-largest city may be without water. Estimates put the water reserve of Sao Paulo, a city of 20 million people, at sixty days. Sporadic outages have already begun, the wealthy are pooling money to receive water in tankers, and government officials are heard discussing weekly five-day shutoffs of the water supply, and the possibility of warning residents to flee. 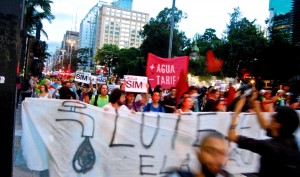 This past year United States people watched stunned as water was cut off, household by household, to struggling people in Detroit, less due to any total water shortage than to a drying up of any political power accessible to the poor in an increasingly undemocratic nation. A local privatization scheme left the city water department underfunded, while dictatorial “emergency management” imposed by the state chose to place the burden of repaying a corrupt government’s bad debt on Detroit’s most impoverished people. U.S. people were forced to remember the guarantee offered by the Universal Declaration of Human Rights, entered into as a treaty obligation by world nations after WWII, that access to water is an inalienable human right. All over the world, water scarcity is becoming a dire threat to the possibility of, as Prof. Noam Chomsky phrases it, decent human survival.

Faced with such news, it is perhaps odd that I think of Professor Yang Yoon Mo, a South Korean activist I have met who, far from any area of drought, has fought instead, and with beautiful and irrepressible courage, to save a small lush rocky outcropping ringed by ocean, and with it both the shoreline, and the hopes for a peaceful future, of his home village. In 2008, Prof. Yang returned to Jeju island, having left a rewarding life as a famed artist and film critic in the capital, Seoul, to join protests against construction of a planned naval base on the shores of Gangjeong, a village in Jeju Island. 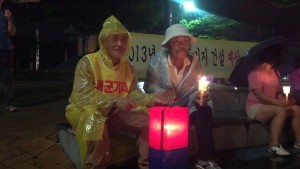 Professor Yang at a vigil.

Though described as part of South Korea’s national defense, the base’s dimensions are fitted to the massive size of United States nuclear submarines and Aegis destroyers, part, as Larry Kerschner notes, of a military buildup forming “a semi-circle of naval and other bases surrounding China,” the United States’ “Asia Pivot” away from focus on the Middle East and toward its traditional superpower rivals. Nobody in Jeju is to be made safer by the base. Professor Yang Yoon Mo was born on Jeju in 1956, when it was already illegal for traumatized survivors there to mention the recent massacres. Under U.S. occupation between 1948 and 1952, the military government had killed tens of thousands of independence protesters and militants. After a half century of official silence, the South Korean government has apologized and erected a memorial on Jeju memorializing perhaps 14,000-30,000 people killed on Jeju Island alone, many in their prison cells, during a tragic time referred to locally as the April 3rd massacre. Many residents are understandably less than eager to welcome a U.S. military presence back to the island.

When he was born, Professor Yang’s mother resolved to protect her son from the tragedy that had befallen her father and uncle, both killed in the massacres. She wanted to steer her son into a safe position in life, even if it meant becoming part of the government establishment. But, at an early age, Professor Yang showed talent as an artist and he simply didn’t “fit in” to the narrow, safe routes his mother’s great fear for him dictated. As a teenager, he became fascinated by cartoons, including, to his mother’s alarm, political cartoons, and he tried to correspond with mainland South Korean cartoonists. His mother interfered with his correspondence and took to destroying his art. He began to mistrust her and even hate her. Understanding has come to him, since. It was through extensive research and time for reflection, during a recent imprisonment, that he finally began to understand why his mother had wanted so badly to protect him. Among some families on Jeju Island, discussions of the past are still considered off-limits. But professor Yang steadily developed his artistic instincts and his readiness to step beyond borders of acceptable communication. As an artist, he found that his mission was to discover beauty, to protect it, and make it known to the world. When I met him, he told me, “I have become someone who was willing to die for a rock.” 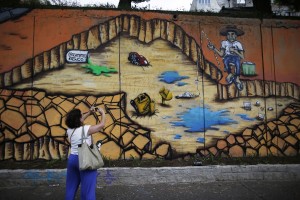 In 2008, the Gureombi Rock was a kilometer-long volcanic outcropping rising stubbornly above the waves somewhat in the manner of a never-suppressed memory of injustice and lying squarely in the way of base construction. In 2008, after participating for 7 nights and 8 days in a pilgrimage to resist the construction, Prof. Yang decided to move to Gangjeong, and in 2009, he pitched a tent on the Gureombi Rock, an exquisitely beautiful, tiny island off the shore of Gangjeong, where he stayed until he was forcibly removed in 2011. “I focused on Gureombi and not anything else,” he told me. “I felt full devotion, full immersion, full absorption.” Over the coming years he would be imprisoned four times, for a total of 555 days. He almost has died.

Along with his imprisonments Professor Yang, who is nearly sixty, has endured three prison fasts ranging in length from fifty to seventy-two days, refusing solid foods as a sign of his longing, his hunger, to protect the environment near his home. His most recent prison fast only ended when environmental and peace movement activists came to the prison to persuade him to continue working alongside them. I visited Gangjeong, and met Professor Yang, in the spring of 2014. Taking a cue from organizers who have spent years protesting U.S. military bases elsewhere in the Pacific Basin, the activists in Gangjeong hold daily protests.

Each morning, we would all assemble at the construction site gates, from which South Korean police would carry many of us away in our chairs to allow the passage of construction vehicles and crews to and from the site. Assemblies included Buddhist prayer chants, celebration of the Catholic daily mass and rosary recitation, dances of universal peace, songs and chants. After several hours of spirited witness and protest, villagers and guests would go to the Gangjeong community kitchen, open seven days a week, 24 hours a day, and enjoy delicious meals together, accepting a free will offering. One afternoon, at the community kitchen, most of the activists had finished their lunch and left when I noticed a slight, unassuming man slipping into the dining hall, fixing himself a tray, and sitting down to eat, alone. I recognized Prof. Yang from the banners and posters that lined roadways up to the construction site and adorned the village community center, the library and the coffee house. His most recent imprisonment had lasted 435 days.

Along with Professor Yang, I met his friend and mentor, Brother Song, a Mennonite minister who, while the Gureombi Rock still stood, nonviolently resisted its destruction by attempting to swim to it, every day. Security posted at the site would roughly throw him back into the water every day, but Brother Song was undeterred. The protests continue, the kitchen is still open, while inside the construction site, crews assault Gangjeong’s beautiful shoreline. Day and night, the South Korean government, in collusion with major companies like Samsung and Hyundai, deploys “construction” crews to rip up plant life, destroy coral reefs, bulldoze and explode entire small islands, threatening the way of life that villagers have long preserved, and arming the United States for cold war competition with China.

The globalisation of solidarity: Occupy Sandy.

Sasha David, at the start of his book The Empire’s Edge (p.7) writes that the U.S. military buildup in the region “is less about being able to defeat China militarily (that is already possible) and more about leverage in being able to dictate terms of trade in the region.” Gureombi rock is gone from its place on the Jeju coastline. The base plans required its complete demolition: It can no longer be seen. “Gureombi is inside of me,” says Prof. Yang. Professor Yang Yoon Mo said that earlier in his life, he would have felt defeated after destruction of the Gureombi Rock and the continued construction of the naval site. Now, he says, he realizes that the purpose for peace and environmental action continues, and he is excited to continue envisioning demilitarized islands working together for peace and environmental protection.

When I last met him, along with Brother Song, it was in Seoul, South Korea, upon Professor Yang’s return from a conference, held in Okinawa, Japan, uniting island activists throughout the region. They were coordinating future plans, and Professor Yang Yoon Mo said that he could even contemplate a fifth imprisonment if it would help broaden and diversify the movement. I don’t think Gureombi is gone, with the way it has changed Prof. Yang, and his community, and incidentally me. We’re not permitted to ignore the beauty and hope of the present. If we close our eyes we can put ourselves in an all-too-plausible future where our resources are gone, and the human community, and the world is already barren, and by implication not worth working to save. That’s when we need to become someone willing to live and work for a rock.

Back at home, and growing in part out of Occupy Sandy’s grassroots humanitarian response to the recent climate-driven disaster in New York, the Detroit Water Brigade has responded to its own city’s horror both with political agitation and water distribution programs. They’re posting on their sites about Sao Paulo. Prof. Yang’s sometime mentor, the activist Bruce Gagnon writes: “From the point of view of corporate capital we are all expendable. We are not going to defeat these corporate forces by remaining isolated inside our single-issue silos … There is a direct connection between the massive $1 trillion a year Pentagon budget [ ] and the destruction of social progress. There is a direct connection between the military’s huge carbon bootprint and climate change.” The swim to our neighbor islands will tend to be part of saving our own.

Living, as I briefly do, in a world of imprisoned beauty, on an island inside that archipelago of U.S. prisons so unacceptably similar to that of our old superpower rival, it’s no wonder I’m thinking of Prof. Yang Yoon Mo. What we do to the environment, we’re doing to each other. What we let our state impose on those walled beyond our borders we will tend to inflict on more and more people walled up within them, until there is no world of beauty left to keep safe for our own use, and no trust left on which any safety can be built. Until it all dries up. Whereas if we recommit to risk and beauty, refusing paths of alleged safety which only avoid temporary danger by leading us toward certain doom, if we seek our security in treating other people fairly, we may find our way to decent lives, along the way toward “decent human survival.”

This article first appeared on TeleSUR.

Kathy Kelly, co-coordinator of Voices for Creative Nonviolence (www.vcnv.org) is in federal prison for participation in an anti-drone protest. She can receive mail at: KATHY KELLY 04971-045; FMC, Lexington.