Earthquake Kills as Many Nepalese as Britain’s Secret War 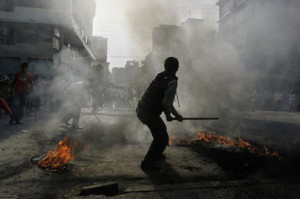 The international media rightly went into mourning for the natural disaster victims, but had little or nothing to say for the victims of British-backed state violence.

The civil war lasted from 1996 to 2006, when Maoists broke away from a unified, pro-democracy communist group and began attacking government buildings. The response was swift and merciless when in 2002 the Maoists attacked an Army barracks. 16,000 Nepalese were killed: about 10,500 of whom were civilians. Former Chatham House fellow Mark Curtis reckons that from 2002 to 2004 alone, 4,000 Nepalese civilians were killed.2 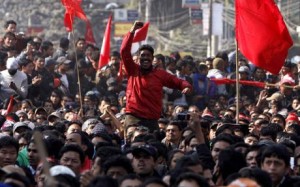 In December 2001, Secretary of State for Foreign and Commonwealth Affairs, Ben Bradshaw, said that the UK Ministry of Defence ‘has supplied training and other support to the Royal Nepalese Army’. Curtis notes that a year later, Britain exported £3 million-worth of military equipment to the country, including helicopters.3

Author Thomas Bell notes that from 2002 as part of the secret Operation Mustang, ‘MI6 funded safe houses and provided training in surveillance and counter-insurgency tactics to Nepal’s army and spy agency, the National Investigation Department’. Agence France-Presse concludes that MI6 ‘created a secure radio network for communications and supplied everything from cameras to computers to mobile phones and night vision binoculars’.4

Al Jazeera reports that in 2003, ‘Nepal had the highest number of disappearances in the world, according to the United Nations Working Group on Enforced Involuntary Disappearances, and almost all of them were carried out by government agents’.5 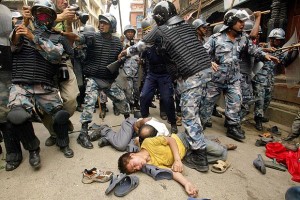 Britain’s weapons and training put to use.

The victims of the recent earthquake may have been saved by a combination of factors, the most salient being improved infrastructure. Media also ignore the fact that the 2015 quake coincides with the bicentenary of the Treaty of Segauli (1815), the British East India Company’s annexation of a third of Nepalese territory, which laid the basis for Nepal’s poverty for centuries to come.

Since the Treaty, Nepal has not followed an independent path, as Parliamentary evidence confirms. Nepal ‘can be said to be our oldest ally’, said Sir Henry d’Avigdor-Goldsmid in 1960. Since the Treaty, Britain ‘has been on the closest terms of friendship with [Nepal] … and upwards of 40 battalions of Gurkhas served with our forces during each of the last two world wars’. The UK’s tax-funded, private investment firm erroneously called the Department for International Development (DFID), wrote of its operational plan (2011-16): ‘the UK and Nepal will celebrate 200 years of partnership’.6 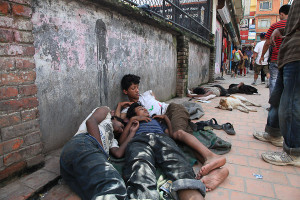 Poverty and homelessness in Nepal.

Another DFID reports shows what the partnership has brought to the country: ‘Nepal is the second poorest country in Asia … Only Afghanistan is poorer’. We need not tarry on Britain’s history in Afghanistan. ‘40% of under-fives are stunted and a quarter are underweight and one in 22 children do not survive to their first birthday’.7