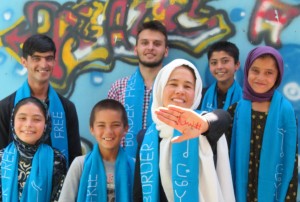 Zarghuna with the word #Enough! in Dari/Pashto on her hand, with her friends from the Afghan Peace Volunteers and Borderfree Street Kids ( from left to right : Mursal, Barath, Inam, Muheb, Zarghuna, Kahar and Zahra )

Kabul, Afghansitan—16 years ago, a Talib ( literally translated, a student ) shot and killed Zarghuna’s father. Zarghuna and her family were frantically fleeing a desperate situation. The same holds true for more than 60 million refugees in today’s ‘progressive’ world. If you’re like me, you may think, “Oh, how messy is Zarghuna’s part of the world.” “How terrible are the Taliban!”, and perhaps even, “We should imprison or eliminate them.”

But, Zarghuna thinks differently. In the noisy violence raging around her, Zarghuna quietly but resolutely says, “#Enough!” Okay, I confess I’m not confident that, in our hurried lives, we’ll appreciate the relevance of Zarghuna’s distant struggle. But I trust we can care for her when she cries. Just sitting there. Crying. “I don’t think my mother will manage if Arif leaves,” she said. Arif, Zarghuna’s youngest brother, has already left home twice in the past three months, with the intention of smuggling himself to Iran and onwards to Europe.

Unlike the steady girl that she usually is, Zarghuna looked up from her downcast posture, and said, “There’s nothing really ‘fulfilling’ in Afghanistan to stay around for, is there?” Zarghuna’s mother lost her husband and father-in-law to war. “She can’t live through another loss,” Zarghuna stated plainly. I believe we need to hear voices like Zarghuna’s. Our ‘smart’ devices, Facebook, Twitter, Instagram, We Chat etc. etc. can’t do the listening. We are the ones who need to listen. We are the ones we’ve been waiting for.

On Zarghuna’s palm is written the word ‘Enough’ in Dari and Pashto ( the official languages of Afghanistan ), pronounced ‘bas’! We may not have experienced war as Zarghuna has, but we’ve each had enough of different severe frustrations; of being treated as less than others, discriminated against, insulted, looked down upon, disrespected, exploited, and violated in various ways.

Or we’ve had enough of feeling lonely in life’s materialistic rush. These challenges appear separate, though that’s not what Zarghuna has been learning. These are interconnected crises. The outcome? We can face the ugly crises we have on our hands today by questioning why there’s such a huge socio-economic difference between the elite and most of us ( the so called 99% ), and an even greater difference between them and the most vulnerable people, like street kids, labourers, and people who live in war zones. Our greed has its toll.

#Enough! is #Enough! is the feeling we all share. So, today, Zarghuna, 100 Borderfree Street Kids, some of whom she teaches, and the Afghan Peace Volunteers, tried to set aside those unpleasant human ways by sharing a meal with 100 Afghan labourers. 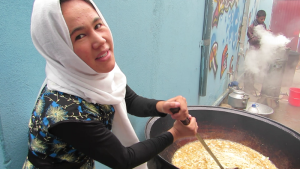 They divided the work of drawing up an invitation list of labourers, getting enough wood for the fire, sifting and washing the raisins and rice, cooking, and thinking about the meaning of it all. 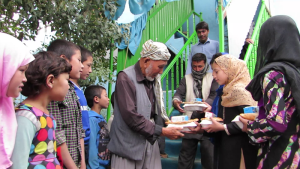 The Borderfree Street Kids sharing the food with the Afghan labourers and saying to them, “Come again in happiness!”

They looked kindly at one another as they shared the food, each of them bearing a war story. How can I reach within you who are so far away, to share with you how captivated I was by the transformation of war-generated pain, sorrow, fear, distrust and hate into the tiny but cumulative actions of determination and love? Can you see it on Zarghuna’s palm, and on the faces of her peace volunteer and street kid friends?

For this story, I had asked Zarghuna to choose between the group picture and a solo picture of her alone. How I wish you could see and hear her wish for the human family not to be alone, but to be together, to agree with one another, including with the Taliban who killed her father and the U.S./NATO forces whose strategy has increased ‘terrorism’, that we’ve had #Enough! Perhaps, listening will be our revolution.

Dr. Hakim, ( Dr. Teck Young, Wee ) is a medical doctor from Singapore who has done humanitarian and social enterprise work in Afghanistan for the past 10 years, including being a mentor to the Afghan Peace Volunteers, an inter-ethnic group of young Afghans dedicated to building non-violent alternatives to war. He is the 2012 recipient of the International Pfeffer Peace Prize.