#Enough! We can respond to the tears of Kunduz refugee, Abdul Fatah

Kabul, Afghanistan–We live in a World at War, and as fellow human beings, what can we do for refugees like 45-year-old Abdul Fatah, who has been crying lately, who doesn’t have a home in his own home? World at War is the title of a report UNHCR released in June 2015, in which António Guterres, the United Nations High Commissioner for Refugees, describes the refugee crises in Europe and worldwide as “an unchecked slide into an era in which the scale of global forced displacement as well as the response required is now clearly dwarfing anything seen before.”

But for those of us who are distant from War and not ‘in the same boat’, being part of the ‘response required’ seems just as ‘out-of-reach’.

Ali, one of the Afghan Peace Volunteers, is 17 years old. On October 6th, 2015, he would have liked to plan for school, as usual, the next day. He wanted to feel affirmed by his teachers and peers. He wanted to know that his mother in Bamiyan was fine for another day. But, in Kabul, the news from Kunduz was worrying him, and the all-night blasts and whistles of bombs and gunfire a few nights before had made him think, “Perhaps, I should pack up and return to Bamiyan.”

Yet, on the 7th of October 2015, the anniversary of the beginning of the U.S. Operation Enduring Freedom in Afghanistan 14 years ago, Ali and the Afghan Peace Volunteers decided instead to meet with members of five Afghan families who had fled the war in Kunduz. Together, they listened to and extended small gifts to these families. Abdul Fatah told his refugee story. “My tears fall every day & I can’t bring myself to eat. I eat this little bread & the bread seems to eat me up. My heart is there and in Kunduz and here…”

The gifts were meant to help the Kunduz families endure their first weeks as Internally Displaced Persons in Kabul.

And the act of giving to others in need gave Ali, me, and the Afghan Peace Volunteers a chance to experience empathy, an emotion often repressed when people just need to survive. We learned to do something small and different from 14 years of the ‘same, old’ method of war, and exploitation. The photos and reflections below describe our time with the Kunduz families…. 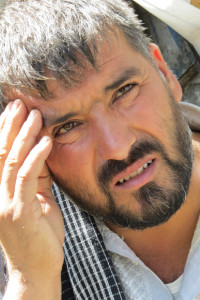 Abdul Fatah, a refugee from Kunduz, in Kabul

Since when did the meaning of this word change to ‘opportunists’, ‘illegal immigrants’? “I am from Kunduz,” said Fatah, his eyes a reservoir, his family desperate. It never crossed his mind what some may mistakenly think of him. “He, that Asiatic-looking man with the beard, is probably a lazy bum who wants to snatch away jobs & homes from people in Kabul.”

He echoed, to our disgust, “Our children are being killed”, the same ‘disgust’ that Doctors Without Borders had for the U.S. gunship that bombed 12 of their staff and 10 of their patients to their fiery deaths. How would we feel if we saw our hospitalized mother burning in her bed, and heard from General so-and-so that it was ‘collateral damage’ ( ‘just too bad’ ), or ‘a request from the Afghan authorities’ ( ‘it’s not our fault’ ), or a ‘mistake’ ( ‘okay, we did it, but we’ll compensate you, okay?’ )?

“My tears come,” Fatah states, “and I can’t bear to eat any bread, because my son is in danger,some relatives are still in Kunduz, and you know, no one…”, his head shivers, his fingers cupped in the direction of his heart, “No one cares a damn.” A man, strong, with bullet wound scars in his thigh and head from 6 wars, he says, breaks down, lifting his neck scarf to wipe his eyes, the reservoir that’s drying up………..Read more in a photo essay here 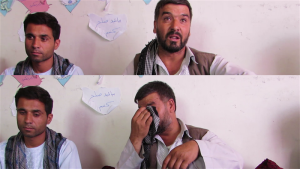 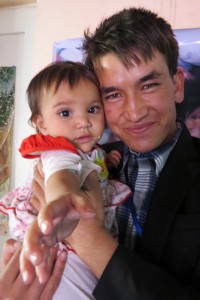 Ali, one of the Afghan Peace Volunteers who assisted the five Kunduz families, including the toddler named Rana in the photo

Dr Hakim, ( Dr. Teck Young, Wee ) is a medical doctor from Singapore who has done humanitarian and social enterprise work in Afghanistan for the past 10 years, including being a mentor to the Afghan Peace Volunteers, an inter-ethnic group of young Afghans dedicated to building non-violent alternatives to war. He is the 2012 recipient of the International Pfeffer Peace Prize.