Written for teleSUR English, which will launch on July 24

Kabul– On July 10, 2014, in New York State, Judge David Gideon sentenced Mary Anne Grady Flores to a year in prison and fined her $1,000 for photographing a peaceful demonstration at the U.S. Air National Guard’s 174th Attack Wing at Hancock Field (near Syracuse) where weaponized Reaper drones are remotely piloted in lethal flights over Afghanistan.  Dozens have been sentenced, previously, for peaceful protest there. But uniquely, the court convicted her under laws meant to punish stalkers, deciding that by taking pictures outside the heavily guarded base she violated a previous order of protection not to stalk or harass the commanding officer. Mary Anne is a 58 year-old grandmother of three, from Ithaca, New York, where she is part of the Upstate Drone Action.

Since late 2009 this grassroots group has persistently raised awareness about the consequences of drone attacks in Afghanistan, the global epicenter of U.S. drone warfare.  In December 2012, the U.S. Air Force revealed that U.S. drones had struck targets in Afghanistan 477 times during just the preceding year. Members of the Upstate Drone Action, alarmed by the proliferation of drones and the ease with which they kill suspects far from any battlefield, are troubled in general to live in a society that so automatically and heedlessly chooses warfare over other available solutions to its problems.

Hundreds have gathered in Syracuse, NY, for events the Coalition has organized, including nonviolent civil resistance at the Hancock base.

Frustrated by the tenacity of war resisters willing to risk arrest, the commander at the base, Colonel Earl Evans, has sought and received an “Order of Protection Grant” – a restraining order – from the DeWitt Town judges, claiming that peace activists posed a threat to his personal safety as an individual when they protested there.

At first, the thought of such an order imposed on nonviolent demonstrators seems merely laughable. These orders of protection are typically used in domestic violence cases, against stalkers, or to protect a victim of (or witnesses to) a crime.  How could a U.S. military commander, living in a fortified base, surrounded by advanced weaponry and the soldiers preparing to use it, be threatened by unarmed civilians like Mary Anne?  She, like most of her companions in the coalition, has worked throughout her adult life to prevent bloodshed and killing. 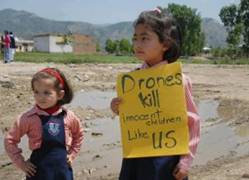 But De Witt courts have upheld Colonel Evans’s right to be protected from the peace activists, and so everyone with an OOP who crosses the boundary (which isn’t clearly marked) outside the military base risks being charged with contempt of court for violating the order.  Mary Anne had lingered for a few moments with the group she wanted to photograph to ask her sister, Ellen, something about the camera she was using.

During her court case and at her sentencing hearing, Mary Anne tried to help Judge Gideon understand that young people like the Afghan Peace Volunteers, (APVs), with whom I’m now living, here in Kabul, are threatened by the drones. She and other coalition members have already presented the court with a letter from Raz Mohammed, an APV whose brother-in-law was killed by a drone, asking that the U.S. courts issue a mandate protecting him and his family from sudden annihilation by remote control.

In Syracuse, NY, a Probation Department pre-sentencing report had recommended no jail time at all for Mary Anne, noting that she has been the major caregiver for her mother and that the infraction didn’t warrant incarceration. But Judge Gideon worried aloud that if he didn’t jail Mary Anne, she might thumb her nose at the courts and again risk arrest.

Judge Gideon has tried numerous peace activists in the De Witt Town Court for their actions protesting drone warfare.  “This has got to stop,” he declared, in a moment of exasperation following an earlier court hearing. It seems that he imposed this sentence on Mary Ann because he and other authorities want to deter activists from gathering peaceably to petition, as the U.S. Constitution’s First Amendment phrases it, “for redress of grievances.”

“I hope she feels proud,” said Abdulhai, a member of the APVs here in Kabul, when he learned that Mary Anne was sentenced to a year in prison.  “She has a good heart.  She thinks about other people far away.” Abdulhai’s smiling face appears on many of the posters carried by activists when they appear in court and when they demonstrate at the base.  In the photo, he’s wearing a blue scarf which the APVs use to symbolize the same blue sky shared by all humans. His sign says: “We want to live without war.”

“Laws should be made to protect human beings,” said Faiz, also part of the APV community.  “Laws shouldn’t protect ways to kill other people.  Here in Afghanistan, the U.S uses drones to kill children, moms, and ordinary people.  I hope the judge will think about this.”

At her sentencing hearing, Mary Anne told Judge Gideon that a series of judicial perversions brought her before him. “The final perversion,” she concluded, “is the reversal of who is the real victim here:  the commander of a military base whose drones kill innocent people halfway around the world, or those innocent people themselves who are the real ones in need of protection from the terror of US drone attacks?”

Mary Anne and the Upstate Drone Action activists have a deep grievance. They object to using Reaper drones to fire Hellfire missiles into homes and communities where Afghan civilians, including children, could be killed. They raise crucial questions about the likelihood of drone attacks exacerbating and prolonging wars, conflicts and other armed strife.  Aerial spies insertable anywhere, ready to kill suspects by missile strikes, make the entire world a battlefield where the U.S. is a combatant. What’s more, this is a technology other nations and non-nation groups are seeking to acquire.  Blowback could cause spiraling levels of lethal exchanges. Even think-tanks like the Stimson Center, itself in part funded by weapons manufacturing corporations, have begun publicly questioning the effectiveness of drone warfare. 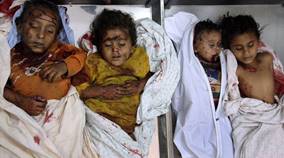 As peace activists, we should voice our concerns about the U.S. military’s accelerating reliance on weaponized robotics before every branch of government, including the judicial branch.

The problem is not that Mary Anne lacks appreciation for the law of the land. She’s exercising her First Amendment right to assemble peaceably for redress of grievance. The problem is that Judge Gideon refuses to challenge military elites, some of whom never, ever want people of compassion and conscience to interfere with their use of threat, force, and even assassination to control people in other lands.

Mary Anne has appealed her case, and a NY judge has released her from prison until the appeal is resolved. Another activist, Jack Gilroy, awaits sentencing, and in coming days and weeks, more activists will be tried on similar charges in the De Witt Town court. Judge Gideon and his fellow DeWitt Court Judge Robert Jokl have many more opportunities to think about these critical issues. I hope they’ll be influenced by having encountered some of the finest people in the world as they hear the cases of peace activists in upstate New York.