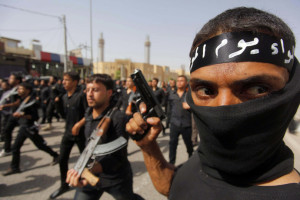 Two days ago an email came from an Iraqi doctor in Baghdad in response to a brief greeting I sent for the month of Ramadan.

“Thanks so much for remembering us…In fact we are the same if not worse.  Our hearts are broken at the organized ruining of our country.  We are targeted by those criminals and gangs coming from everywhere, even from the west who are all witnessing this drama and, if not supporting it, are keeping silent.  We wonder what sin we committed to face this gloomy black fate.  In fact, what is going on is beyond words. “

This courageous woman doctor never left the side of gravely ill children despite the great exodus of doctors due to kidnappings, assassinations and threats to their lives and families.  Sadly she reports that another of her siblings has cancer, and she needs to leave the medical students for some days.  This happens she says regretfully in “the critical time of final exams.”   She herself is a cancer survivor and both her mother and sister had cancer.   They have no choice, she says, but to go on and try to survive.

Another long-time friend is working in southern Iraq in a job that will soon end.  He is away from his family in Baghdad, and it is dangerous for him in the south, but he has no choice with a wife and seven children to support.  There was already an assassination attempt on his life in Baghdad and houses near their own have been bombed.  There are nightly explosions and gunfire, assassinations and kidnappings.   Approximately 200 people across Iraq have been killed each day in this month alone.

We have been frantically trying to find a safe place for him and his family to escape to.  If they could go to Kurdistan they would join the ranks of the already three million IDPs (Internally Displaced Persons) within Iraq.  If they could get to Turkey, they might eventually get refugee status.  But it is expensive there, they don’t speak the language, are not allowed to work and resettlement could take years.

Our friend emailed that his wife decided to send their second oldest son, 16 years, to her mother’s house due to kidnapping cases. “Two kids were kidnapped two days ago.”   Ali, I will call the son, has exams and his grandmother’s house is closer to the school.  When I stayed with this family for two weeks in 2013, one of Ali’s twelve year old friends was kidnapped and was never found.

The grandmother takes her grandson each day to school and sits against a wall under its shadow until Ali finishes his exam.   She is “old and weak,” Ali’s father writes, “and honestly it is meaningless to think she could protect Ali as she can’t really protect herself.  But I do appreciate her efforts.”    Ali told his dad that his grandmother was causing him “too much embarrassment as she doesn’t understand the rules of the exams.”  She always tries to enter the exam class to give Ali cold water because it is very hot.  The first day the director of the exam allowed her to do this, but another day during the exam she tried again.  This time it was not to give him water.  She had cooked a rooster and told the staff that he had to eat well to do good on the exam!  Ali was a little bit angry but his love for her “let him forget the embarrassing feeling!”  He is “crazy in love” with his grandmother as she is the only grandparent left.

Ali was complaining to his father about the insufferable heat and lack of air cooling system, as well as the terrible mosquitoes.  He uses a kerosene lamp for studying at night.    The father was trying to encourage him by phone to overcome the difficulties saying: No pain, no gain.  Ali responded “Dad, since we opened our eyes in this life, we have only known pain.”

Just yesterday two civilians were killed as Ali and his grandmother approached the school.  This happened right in front of their eyes.   His father emailed: “Ali couldn’t answer exam well as he saw the accident.  Let us pray for his safety.”

Our friend and his wife worry excessively about their oldest boy, 18 years, as militia come to the houses seeking young men to fight ISIS, and they “will take young guys by force to do battle.”  Although this son is needed to guard the house at night and help his mother, the mother felt compelled to send this son away too.

Cathy Breen has represented Voices for Creative Nonviolence in many visits to Iraq. She lived in Baghdad throughout the 2003 Shock and Awe bombing and the initial weeks of the U.S. invasion.  She lives and works at Maryhouse Catholic Worker in NYC.