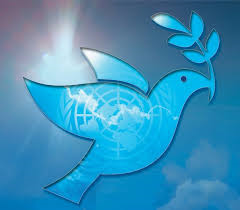 The UN’s emblem, with its occult 33 grids.

September 21st is the International Day of Peace, ‘devoted to strengthening the ideals of peace, both within and among all nations and peoples’, says the United Nations. ‘To mark the 30th anniversary [of the Resolution]’, this year’s theme is the Right of Peoples to Peace.1

The task is indeed onerous. The voting record on the Declaration on the Right of Peoples to Peace indicates the sincerity with which elites address the issue. The Annex of the Resolution ‘Express[es] the will and aspirations of all peoples to eradicate war from the life of mankind, and above all, to avert a nuclear world-wide catastrophe’.2

92 countries voted Yes on the Resolution, 34 countries Abstained. America, Britain, and France were among those that abstained; China and the USSR voted Yes. Unsurprisingly, poor countries subject to brutal neocolonialism overwhelmingly voted Yes (including many of those under Soviet occupation).3 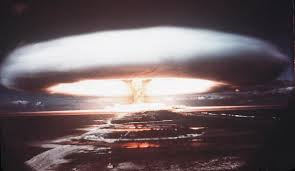 Hell in paradise: The first hydrogen bomb test, conducted in the Marshall Islands.

‘The Republic of the Marshall Islands contends that “by not actively pursuing negotiations in good faith on effective measures relating to cessation of the nuclear arms race at an early date and to nuclear disarmament, the [UK] has breached and continues to breach its legal duty to perform its obligations under the [1968 Nuclear Non-Proliferation Treaty] and customary international law in good faith”’.4

All the nuclear powers are currently upgrading their weapons. 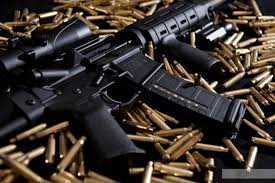 ‘Each year, over half a million people are killed, with millions more injured, raped or forced to flee their homes because of the irresponsible trade and use of weapons’, says Amnesty International. ‘Additionally, at the end of 2008, 26 million people were internally displaced due to armed violence and currently there are still tens of thousands of child soldiers in 19 countries’.6

At the moment, 64 countries are involved in armed conflict with and/or against 564 armies, militias, and/or separatist groups, according to a detailed list by the website Wars in the World.7

What makes the International Day of Peace 2014 especially important is that it coincides with the centenary of World War I, a ‘legalised mass murder’ (Britain’s last surviving WWI soldier, Harry Patch,) in which 15 million or more perished. One of the things that elites have learnt from WWI is that killing innocent people is far easier now.

A United Nations report on the impact of war on children states that ‘Civilian fatalities in wartime have climbed from 5 per cent at the turn of the century … to more than 90 per cent in the wars of the 1990s’. The bombing of Iraq by Anglo-American forces in March 2003 (continuing intermittently until 2008) deliberately targeted civilians, as US military documents admit, in violation of the Fourth Geneva Convention, in a campaign called ‘Shock and Awe’.8

UNICEF notes that ‘by the late 1980s adults had put guns in the hands of as many as 200,000 children under the age of 16 in 25 countries’. Ceasefire magazine notes that ‘by the time the ATT [Arms Trade Treaty] was adopted by the UN General Assembly in April 2013, its provisions had been so diluted as to render it practically ineffective.  The final text contains a number of serious loopholes and flaws’. These are recognized by the UK government, which ratified the treaty in 2014.9 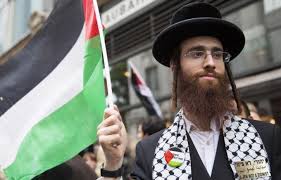 A religious Jew demonstrates for Palestine.

The victims of war are by no means beyond reach. 150,000 people protested in London in August 2014 against Israel’s latest assault on the occupied Gaza Strip. As NATO leaders meet in Wales to plan more death and destruction, thousands of peaceful demonstrators arranged the Newport Alternative Summit. Topics included Women and War and workshops included Fly Kites, Not Drones.10

These protests are symbols of the democratic deficit between elites and public opinion. Clear majorities of people in nuclear-armed States want to see conditional elimination of nuclear weapons—conditioned on total, global elimination (which would be in keeping with the UN Declaration on the Right of Peoples to Peace, and countless others).11 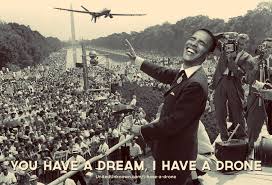 Obama poster: ‘You have a dream. I have a drone’.

Pew Research Center reports that ‘In 39 of 44 countries surveyed, majorities or pluralities oppose U.S. drone strikes’. World Public Opinion reports: ‘Majorities in both the United States (78%) and Russia (67%) say that as long as no other country puts weapons into space, their own governments should also refrain from doing so’, adding: ‘Most Russians (72%) and Americans (80%) also favor a new treaty banning all weapons in space’.12

The challenge of domestic populations is to nonviolently compel their governments to implement their wishes, including getting successive US administrations to accept the China-Russia-drafted treaty to ban space weapons. If they don’t, the reality of ‘Full Spectrum Dominance’ moves ever-closer.

3. Declaration on the Right of Peoples to Peace, http://unbisnet.un.org:8080/ipac20/ipac.jsp?profile=voting&index=.VM&term=ares3911

4. ICJ, ‘The Republic of the Marshall Islands files Applications against nine States for their alleged failure to fulfil their obligations with respect to the cessation of the nuclear arms race at an early date and to nuclear disarmament’, No. 2014/18, 25 April, 2014, www.icj-cij.org/presscom/files/0/18300.pdf

10. Details can be found on the Stop the War website.