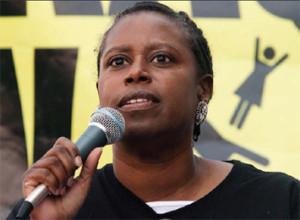 This paper seeks to establish that for citizens to turn their bellicose state into one that espouses peace, they must be aware of the operation not only of their Public State, but also of their Deep State. Moreover, this paper establishes that The Deep State acts for reasons that are not always readily apparent and in ways that are not always apparently legal. On some occasions, The Deep State even acts in ways that could be considered treasonous. The Public State then lies to cover up the actions of The Deep State. Insightful citizens understand government lies, but may not be aware of the operation of The Deep State. This paper argues that in order for citizens to turn belligerent governments into peaceful ones, they must understand that a powerful clue has been emitted whenever the government narrative doesn’t make sense. Therefore, under these circumstances, the patriotic act is disbelief of the government narrative thereby rendering the actions of The Deep State dysfunctional. Finally, this paper examines the Charlie Hebdo tragedy in light of past “Deep Events” that include the 1963 assassination of President John F. Kennedy and the 2005 London Bombing.

This is an excerpt from Dr. McKinney’s essay published in Voices for Peace: Leading Scholars and Activists Examine America’s Modern Wars, published by the Plymouth Institute for Peace Research www.pipr.co.uk/ebooks . The book also features original contributions from Noam Chomsky, Ilan Pappé, and many other leading activists and scholars. 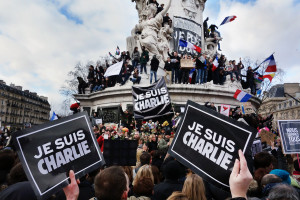 According to a recent internet search, at least five major mainstream media outlets produced a timeline of the Charlie Hebdo events. On January 7, the date of this murderous event, the Canadian Broadcasting Corporation (CBC) produced a timeline of events complete with a map and audio of an English-speaking witness.1 The CBC article includes that the gunmen shouted “Allahu Akbar” as they entered the Hebdo office. The Telegraph Newspaper in London and the International Business Times in New York City followed suit on January 8th with their timelines.2 The Guardian, The Independent, EuroNews, and CNN all published timelines, also. This is the most basic set of events in all of the timelines:

Just before 11:30 am car arrives in front of Charlie Hebdo office and two masked and hooded individuals get out from it. They are given access to the office by an employee just arriving for work.

Just after 11:30 am gunmen depart Hebdo office and engage in three police encounters that include gunfire and result in the death of one police officer lying on the ground. They carjack a car and make their getaway.

By 2:00 that afternoon, the hashtag (#), “Je suis Charlie,” had become a global social media trend. 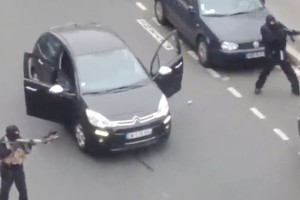 The gunmen hide their faces but take their ID cards.

CURIOSITIES AND INCONSISTENCIES IN THE FRENCH GOVERNMENT NARRATIVE BEGIN TO EMERGE

While Muslims all over the planet began to apologize for what had happened, already, citizen journalists and members of the global Truth Movement found inconsistencies in the details of the French Government’s official narrative of the Charlie Hebdo events. At first, the video of the shooting of the police officer was blacked out. But, later, un-blacked-out footage emerged that clearly showed that the police officer was not shot at all by the gunmen in the footage that had been circulated on most media websites. Even today, when we know that un-blacked-out footage exists and is widely available elsewhere, on the International Business Times website, the blacked-out video is labeled with a caution: “Graphic footage: Police officer shot by Paris gunmen.”3

Paul Craig Roberts, Ph.D., former Assistant Treasury Secretary for Economic Policy under Republican President Ronald Reagan, was among the first to publish his own compilation of inconvenient findings in his column, “Suspicions are growing that the French shootings are a false flag operation.”4 Roberts, noting that the effect of the tragic events was to bring France back into line after French President, Hollande, had spoken against Washington-inspired sanctions against Russia and to stop Europe’s slide toward support of Palestinian aspirations for self-determination through a real and viable state, lists the following as questions, originally pointed out by members of the Truth Movement, and unanswered by the official narrative:

A) The suicide of the police chief in charge of the Hebdo investigation;

B) YouTube’s removal of the un-blacked-out video footage due to “shocking and disgusting content”;

C) An analysis and display of the un-blacked-out video footage of the shooting of the police officer showing no blood, no recoil, no head fragments splattering. 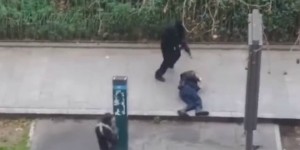 No blood. No head jerk. No recoil. No way.

On January 13, Jonathan Cook, prize-winning journalist based in Nazareth, draws from the same un-blacked-out video as Roberts that seems to show that the police officer who the French government and media say was shot in the head, was, in fact, not shot in the head. After reviewing the video, Cook draws two conclusions: that the authorities lied about the cause of the policeman’s death and the media simply “regurgitated an official story that does not seem to fit the available evidence.”5

On January 18, 2015, the blog, Panamza, published an article that listed several inconsistencies. The article is entitled, “Fuite des terrorists de Charlie Hebdo: un trajet impossible.”6 This article describes the flight of the Charlie Hebdo attackers as “an impossible route.” This story is based on yet another video showing their departure as one that contradicts the official narrative. Finally, addressing this thorny issue, Panamza reports that Paris’s Chief Prosecutor, François Molins, at a press conference on January 9, 2015 gives the getaway route of the perpetrators.

Sort of like the Warren Commission’s Theory of the Magic Bullet that struck Texas Governor John Connolly and killed President Kennedy, but was substantially unscathed when found on a hospital stretcher.

Utilizing Google Maps,” members of the public are seeking to answer the question, “Which way did they go?” Commenting further on yet another citizen analysis blog, appears the following commentary: “I made an itinerary of the place where the first car was abandoned and the place where the attackers supposedly hijacked one of the witnesses. It is impossible. The witness lies.” On January 13, 2015, Reuters published a video, republished by Panamza, that directly contradicted the official getaway version. In fact, the official getaway version caused more people, familiar with the neighborhood, to join the Hebdo Truth Movement. Finally, the revelation—not really, but just a reminder—of a chance encounter between French President Sarkozy and Amedy Coulibaly, where the latter asked the former for a job and then years later, terrorized a Kosher grocery store!7

MAKING SENSE OF THE NONSENSICAL: THE RISE OF THE TRUTH MOVEMENT

In my lifetime, the Truth Movement began the day everyone in the government subscribed to “The Magic Bullet Theory” in the murder of President Kennedy. People who have impacted me deeply asked important questions at that time of a government that was not forthcoming. For example, in 2013, I had the opportunity to interview Dr. Cyril Wecht, who investigated the President’s autopsy report on behalf of the American Medical Association. He did not believe the official government narrative of what happened to President Kennedy after studying that report and did not believe it when I interviewed him fifty years later. Dr. Cyril Wecht became a member of The Truth Movement only after he had been entrusted to study important information as a result of many objections to the government’s narrative. Dr. Wecht became a source of information and inspiration for many important others.

Inspection of the government’s official narrative of the murder of Dr. Martin Luther King, Jr. also reveals certain anomalies that, at first, just don’t add up. For example, it was testified in the 1999 trial establishing that there was a government conspiracy to murder Dr. Martin Luther King, Jr., that the order was given by Jesse Jackson to have the local armed group, The Invaders, to leave the Lorraine Motel only minutes before the assassination. In order to make sense of all of the puzzle pieces individually and as a whole, each bit of information must be put into perspective by devising a completely new way of looking at it, even questioning “conventional wisdom”—whatever that is.8 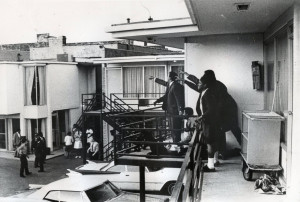 This questioning of conventional wisdom or even what is taken to be the prevailing “common sense” at the time is what can produce breakthroughs in understanding. Like connecting the dots in that famous photograph of the Black person touching Dr. King on the balcony of the Lorraine Motel after he had been shot. According to testimony in the trial, that person was Merrell McCullough, then-Officer with the Memphis Police Department, and infiltrator of the group, The Invaders, later, at the time of the 1999 trial, employed by the Central Intelligence Agency (CIA).9  Thus, yet another Truth Movement emerged around the murder of Dr. King.

One of the popular street researchers in this area was Steve Cokely who proclaimed at one of his lectures, that his job was to translate the tedious minutiae of the 1999 trial into people-speak so that the average ordinary person who was impacted by the murder of Dr. King could understand what had happened and why it mattered. Truth Warriors like Steve Cokely are never rewarded by the state—or for that matter, the public at large—and suffer like the whistleblowers that they are—for their dedication to getting the truth out about these tragic events. At best, ignored by the special interest press, their daily labor is without recognition or award.

A powerful moment in The Truth Movement occurred when JFK researchers joined with MLK researchers and then began delving into the facts of the other important assassinations of the decade: Malcolm X; President Kennedy’s brother, Robert Kennedy, who, himself was poised to become the next President of the United States. The COINTELPRO Papers provided a treasure trove of information on the government’s orchestrated attacks on peace activists during the Anti-Vietnam War era, as well as social movement activists working the streets of the U.S. for social and economic justice for African-Americans, Puerto Ricans, American Indians, Mexican-Americans and their supporters.

The Church Committee went further and exposed assassination attempts on foreign leaders and the infiltration of every aspect of social, religious, and academic life by U.S. intelligence, including breaches of the U.S. Constitution. What would be surprising is if a Truth Movement did not arise from the revelations.

After September 11, 2001, all Members of Congress were told that we were hit because we were free and that we should tell that to our constituents. All over the U.S., Members of Congress dutifully repeated that official narrative. But not me. I couldn’t stoop so low when I understood that the United States had invested trillions of dollars in an intelligence and military infrastructure and on one day that infrastructure failed four times—including at the Pentagon, itself! September 11, 2001 created a new generation of Truthers because the U.S. government’s official narrative was so unbelievable. And as September 11th is the excuse for draconian legislation that snatches civil liberties from U.S. citizens and creates an illusion of support for U.S.-led wars all over the world, more and more people are heeding Paul Craig Roberts’s plea to people to just use their brains and think…

Dr. McKinney’s complete essay is available in Voices for Peace (www.pipr.co.uk/ebooks), along with articles by Noam Chomsky, John Pilger, Kathy Kelly, and other leading activists and scholars.

2. The Telegraph and International Business Times timelines are located at http://www.telegraph.co.uk/news/worldnews/europe/france/11332548/Charlie-Hebdo-timeline-from-defiance-to-tragedy-and-mourning.html and http://www.ibtimes.com/paris-attack-video-gunmen-filmed-shooting-wounded-police-officer-1776004 respectively, accessed on January 30, 2015.

4. Paul Craig Roberts, “Suspicions are growing that the French shootings are a false flag operation,” located at http://www.paulcraigroberts.org/2015/01/11/suspicions-growing-french-shootings-false-flag-operation/ accessed on January 30, 2015.