Jobless Kabul and the Works of War 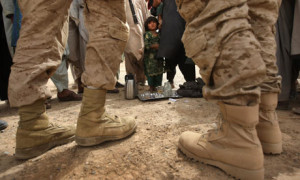 Kabul—Last week, here in Kabul, the Afghan Peace Volunteers welcomed activist Carmen Trotta, from New York, who has lived in close community with impoverished people in his city for the past 25 years, serving meals, sharing housing, and offering hospitality to the best of his ability.  Put simply and in its own words, his community, founded by Dorothy Day, exists to practice “the works of mercy” and to “end the works of war.” We wanted to hear Carmen’s first impressions of traveling the streets of Kabul on his way from the airport to the working class neighborhood where he’ll be staying as the APVs’ welcome guest.

He said it was the first time he’d seen the streets of any city so crowded with people who have no work. Carmen had noticed men sitting in wheelbarrows, on curb sides, and along sidewalks, unemployed, some of them waiting for a day labor opportunity that might or might not come. Dr. Hakim, the APV’s mentor, quoted Carmen the relevant statistics: the CIA World Fact Book uses research from 2008 to put Afghanistan’s unemployment rate at 35% – just under the figure of 36% of Afghans living beneath the poverty level.  That’s the CIA’s unemployment figure – Catherine James, writing in The Asian Review this past March, noted that “the Afghan Chamber of Commerce puts it at 40%, the World Bank measures it at 56% and Afghanistan’s labor leaders put it at a shocking 86%.” 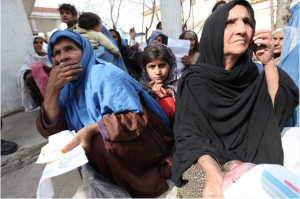 Overall statistics for Afghanistan are grim. A recent article in the UK’s Independent reported that one million children under five are acutely malnourished, 54 per cent of girls do not go to school and war has displaced 630,000 Afghans within their own country. Relentlessly, the fighting continues. Now, on average, 40 children are maimed or killed in fighting every week.

Rustom Ali, a cobbler – a shoemaker, born here in Kabul – visited with me the day after Carmen’s arrival, and explained more about employment in his city, and the prospects for Afghans surviving this latest decade out of a near-half-century of near-constant foreign invasion. He had to find time out of a 12 hour workday to meet with me.

Rustom mends shoes, or waits for shoes to mend, 7 days a week, from 7:00 a.m. – 7:00 p.m., at the roadside. His “shop” consists of a box containing equipment and a primitive, portable overhead shelter. He sits on a ledge, under the blazing sun, (or in freezing cold during Afghanistan’s harsh winter). 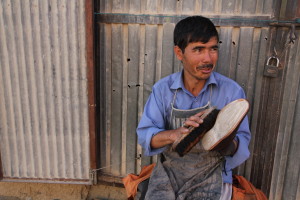 Each day he earns about 250 Afghanis, equivalent to roughly four and a half dollars in U.S. money. Dependent on him for food and shelter are his wife Fatima, his daughter Narghis (age 7), and five-year-old Mehdi, his son; Rustom’s father also lives with them and has no work. Each day, the price of bread to feed the family is 100 Afghanis ($1.76).  Beyond supplying bread, rice, beans and oil, he must also pay for rent and gas. He will never be able to save money at this rate, despite his fierce yearning for a better future for his two children.

Twenty years ago, Rustom had hoped for a far different life for himself.  He had travelled to Iran and, although Iranians generally discriminated against Afghans, he was able to go to school, where he was an excellent student, always working part time as a cobbler. He enjoyed sports, and also liked learning English in his spare time. He showed me two notebooks he had begun then, filled with details about his family history and reflections about his life.

One day, when he was 18 years old and still living in Iran, a car carrying flowers to a wedding hit him as he crossed an intersection, catapulting him into the air.  He landed on his head.  After 48 days in hospital and then three more months spent recovering at home, he was finally able to walk and speak again.  His speech and memory are still affected by the accident. 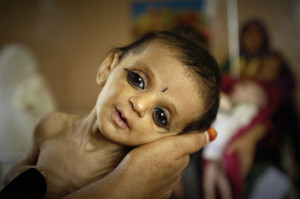 Malnutrition among Afghan children is one in four.

Rustom hired a lawyer, hoping a judge would compel the driver who caused the accident to pay some reparations.  But the driver was a native to Iran and Rustom was an Afghan. “I endured great pain and permanent brain damage because of the accident,” he said, “But being treated as though I wasn’t a human being,” – the reaction of the Iranian court – “it was more painful.  Every day I could see this kind of discrimination against Afghans in Iran.”  And so he took his chances and returned to Kabul.

When I asked Rustom about his greatest hopes for his own children, he said that he and his wife teach them, every day, never to discriminate against others the way he was discriminated against in Iran. He had been sorely hurt when the courts there refused to see him, a foreigner, as a human being.

Abdulhai, an Afghan Peace Volunteer, translated between me and Rustom, having developed a friendship with Rustom since they first sat and talked several months ago. Abdulhai had confessed to Rustom that he was struggling with loneliness and sadness.  Rustom offered comfort and encouragement. He has great hopes for Abdulhai, who has, in his view, a future much brighter than so many here, given his enrolment in school and his interest in learning new skills.  Rustom said that after four years sitting daily in the same place waiting to repair shoes, Abdulhai was the first person to engage him in a genuine conversation. 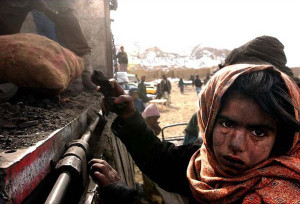 This morning, Carmen and Faiz, another APV member, took a long, early morning walk through a main street in the neighbourhood where we live. By now, Carmen is recognizing faces and names. He knows the bakers who’ve stopped their work to share a cup of tea with him. Sayyaf, who lost both legs during civil war in Kabul and survives by selling glasses and mousetraps from a somewhat ramshackle cart, waved to Carmen with a broad smile and offered him a cup of tea.

As the U.S. cobbles together justifications for its ongoing, foolhardy war in Afghanistan, glimmers of hope persist in small communities like Carmen’s in New York and the APVs in Kabul. They agitate against war. They believe that doing the works of mercy helps us set aside the works of war. And, they’re renewed, consistently, by solidarity with others longing to form humane relations and, as Carmen’s community puts it, “build a new world within the shell of the old.”