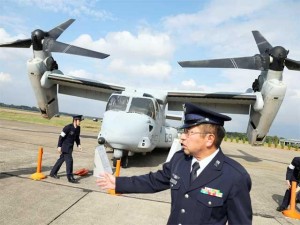 Okinawa–In late October 2015, I was with 3 Okinawa peace activists and a British solidarity activist on a tour of local resistance to U.S. military bases. After an hour of driving north from the city of Nago, crossing deep ravines and shimmering blue bays, we approached a dense forest, where the U.S. military’s only jungle warfare training center is situated, way up in the northernmost section of the island of Okinawa.

As we continued driving, the highway was suddenly blocked by some large, camouflage military vehicles, and we got out to investigate. One of the vehicles was an armored personnel carrier with what looked to be about 25 soldiers inside, some of them looking out at us quizzically. I waved and a few of them waved back. We watched two soldiers get out and direct traffic around their convoy, while they waited to enter the training center’s main gate. For a few minutes we chanted and banged our drums at the gate. Once the first vehicle cleared whatever impasse they had at the gate, all the vehicles soon vacated the highway and disappeared into the training center. 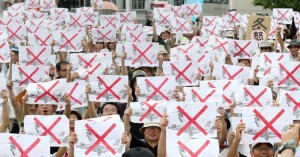 Dozens of anti-Osprey protestors in Japan hold placards of the Osprey with big crosses through them.

Such a sight seems to be commonplace in this region, yet a more grave concern lies in the fact that military aircraft fly low over people’s homes and fields. One family, which keeps a decibel meter in their home, says that the noise level sometimes reaches 100 decibels and that sometimes the pilots’ faces are visible. The blasts of heat from the flying machines and the smell of fuel further irritate the senses.

The U.S. Air Force plans to build six new helipads in the jungle as part of a deal to give about one half of the training center acreage back to Japan. Yet, right in the middle of these proposed helipad sites lies Takae, a village of little more than 150 residents. They are the people who will suffer the increased air traffic that is sure to result if the helipads are built. They will have to abide the possibility of a crash— there have been at least 46 aircraft accidents since 1972, and in 1959 a plane carrying 2 missiles crashed into a school, killing 17 people and injuring 200.

Now that the Air Force has a new toy, the MV-22 Osprey helicopter, there have been a lot of trainee pilots going out on practice runs. Unfortunately, the Osprey has established an abysmal safety record compared to earlier models, and what makes the prospect of a crash even more unsettling for the villagers is the fact that its propellers are specifically designed to shatter on impact and disperse laterally, away from the pilot. This “safety” feature would not be safe for potential bystanders. 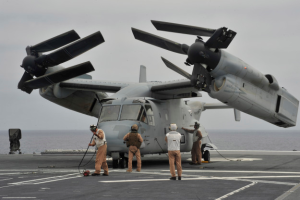 Osprey on a navy destroyer with rotors folded.

Takae residents also believe that the U.S. military would like to use their village as part of training exercises, an idea that doesn’t seem so farfetched after considering what happened during the Vietnam War. At that time, the U.S. military built a “dummy” village in the jungle and forcefully conscripted Takae residents, one as young as six years old, to wear black clothing and carry on as though they were living in a Vietcong stronghold. The conscripted residents were even required to stage mock attacks from the village.

Now, Takae residents and solidarity activists from other parts of Okinawa maintain 2 protest camps that block either end of an access road to two of the helipad construction sites. Two more entrances to 2 already constructed helipads are permanently blocked with parked beater vehicles surrounded by a kind of welded scaffolding. At least a few activists watch the road to the unfinished helipads 24 hours a day, often in rotating shifts. So far, construction vehicles have been unable to enter the access road in order to finish building the helipads.

On the day I visited the protest camp, I met Professor Kosuzu, from Ryukyu University. She typically spends her weekends at the Takae encampment. A specialist in North American geography, particularly the Caribbean region, she says the Takae movement draws a lot of inspiration from the 1990s struggle that ended U.S. military training on the Puerto Rican island of Vieques.

“One of the Puerto Rican campaigners came to Okinawa to help us completely encircle Futenma Air Base back in 1995. I feel like the U.S. relationship with Okinawa is also a kind of colonialism.”

My goal in travelling to Okinawa is to tell other people in the U.S. about that reality, of bases maintained on forcefully expropriated land. With enough of a persistent uproar, coming from the Okinawa side and from the U.S. side, we will make it ever more difficult for the U.S. to maintain its overseas bases, rather than to simply close them.