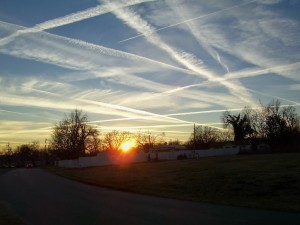 Contrails are unintended geoengineering. But are the ones pictured made deliberately as part of a program to cool the planet?

I grew up in the 1940s in the country, an hour’s drive north of the George Washington Bridge and New York City. When I was about seven years old, my grandfather, my mother’s father, discovered I liked birds. An avid birdwatcher who had suffered the loss of his hearing acuity, Grandpa invited me to be his ears on long early morning bird walks whenever my family visited. He taught me the pleasure of being in the woods, out of the range of human voices and the noise of traffic. I learned to identify birds by their sounds, and he taught me their names. Without realizing it, I was imbued with conservationist values from my earliest years, and later, during the 1970s, when I wrote grant proposals for a number of activist national environmental organizations, I became more knowingly committed to those values.

As a watcher of birds I became too a watcher of the sky above me, first for signs of hawks and vultures; later, for the pleasure of watching clouds. When a friend spoke to me a decade or so ago about what he called “chemtrails,” I held up my hands reflexively, palms out, signaling him to cease and desist. I didn’t want to hear about it. Then something happened. In retrospect I think of it as my first encounter with the geoengineering monkey wrench.

It happened ten years ago, when I awoke at 3 AM on a warm October night. Suddenly wide awake, I decided to get up and stand outside in the moonlight that was flooding the house. I stood outside by our garage, looked up and beheld a gargantuan murky cloud. An unaccountable, horizon-to-horizon corrugated, scabrous serpent-cloud, inert and staggeringly immense, it hung motionless aloft for as long as I stared at it. A long while. Illumined by grisly moonlight its sheer extraordinariness — its inexplicable garishness — created a visceral impression that has never left me. Standing in the moonlight I thought of that moment, reflecting on my friend’s attempted alert I whispered to myself, ‘My god, he was right’.

It took me ten years to gird myself to undertake an exploration of that dark apparition, an investigation that has uncorked as many questions as it has answered.

Science historian James R. Fleming has made it incontestably clear that geoengineering is a creature birthed and brought to life inside the military.[1] The reason so many questions about geoengineering remain difficult to answer is that military research and operations are typically classified, usually highly classified, and thus impenetrable to public view. The highly militarized national security state and its permanent war economy[2] that evolved ever since the end of World War II guards its secrets with ferocity and guile, and for the most part the public, certainly the US public and its corporate media — and most shamefully, the nation’s environmental community — stays dutifully silent when confronted with claims that an issue cannot be broached due to reasons of “national security.” This situation of complicit silence, enforced at the outset of the Cold War, has persisted despite the end of that war in 1989-1991, and has been magnified since September 11, 2001.

One of the most puzzling questions I’ve stumbled on is what I think of as the Jekyll-and-Hyde conundrum: it turns out geoengineers are a diverse but divided community, a profession that exhibits dissociative identity disorder — a split personality. Mr. Hyde, the “dark side” personality, sometimes referred to as a “weaponeer,” has worked out of public sight for the military for many decades to weaponize the weather, the climate, and other Earth systems such as the ionosphere. One of Mr. Hyde’s foremost redoubts has been the University of California Berkeley’s Lawrence Livermore National Laboratory (LLNL), co-founded in 1952 by the father of the H-bomb, Edward Teller.[3] Mr. Hyde’s legacy stretches back seven decades; his work since the Vietnam War has continued out of public sight (and will do so for as long as the militarized national security state holds our uncritical allegiance).

Dr. Jekyll, on the other hand, represents by and large the open and typically optimistic public, civilian face of the geoengineering community, the “good” scientist, oriented to solving the “climate problem.” Ever since 2006 when Nobel laureate Paul Crutzen aired a new version of an old Hydean scheme to spray sulfur aerosols into the stratosphere to cool down the climate,[4] the good scientist (and geoengineer) has been scrupulously oriented to help humanity without regard to national identity. But not all the players are so oriented, as we shall learn.

Crutzen was the first to break the ranks of the climate scientists and initiate an open discussion about geoengineering, dragging the once arcane notion out of obscurity and irrevocably linking climate scientists to climate engineers. The grizzled weaponeers (nuclear weapons scientists) emerged as do-good climate engineers and the term “geoengineering” entered daily public discourse for the first time, fit for print. Though located in universities, prestigious research institutes, and erstwhile nuclear weapons labs, the academic geoengineers have an obscure brotherhood inside the military, whose scientific findings over a span of decades’ research form a legacy that is publicly unacknowledged, locked inside military manuals and classified scientific documents.

One purpose of this essay is therefore perhaps unavoidably therapeutic: I wish to help promote an integration of two scientific communities, or more precisely, to persuade the cheery Dr. Jekyll to recognize his alter ego, the obscure Mr. Hyde, and to do so within plain sight of the entire global climate-change science and activist community. Why? Because until this self-reckoning happens no good will come of Dr. Jekyll’s supposedly benign schemes to deal with Earth’s climate. The clever and above all determined Mr. Hyde, an inveterate national security warrior, will use such schemes for his own anachronistic national security ends. He always has. And history demonstrates these ends do not serve the benefit of all humanity. Nor what geoscientists now call the Earth System.

Unlike partisan warfare, climate change involves the entirety of the human family, the entire biosphere, the fate of a living totality, planet Earth. A hidden partisan identity within the geoengineering community that places the interests of some nations over those of others inevitably will subvert the geoengineering community’s attempts to influence a whole-Earth system like the climate. And they will lead us directly into anthropogenic climate chaos.

A wall of silence surrounds the subject of geoengineering past and present. But now geoengineering future bubbles brightly in our ears. The disconnection between a fecund and little understood past and its presumed, shortly-to-be-hatched progeny is an unsettling one. Neither parent nor child seems to recognize each other.

The Royal Society begins its definition of geoengineering as “the deliberate large-scale manipulation of the planetary environment” and by itself this serves as a historically valid definition. The Society adds: “to counteract anthropogenic climate change,” which serves to make the new but more narrow definition of geoengineering as climate engineering, or in its most current iteration, “climate intervention.”[5] Broad or narrow, for nearly three-quarters of a century geoengineering has been conducted for reasons that have little to do with the mandate to ameliorate climate change and much to do with war, and secondly with commerce.

This odd paradox has shadowed the world climate negotiations that took place, most recently, in the Paris suburb of Le Bourget during December 2015 to try and achieve, after over 20 years of trying, a legally binding universal agreement to reduce global greenhouse gas emissions and limit the rise of global temperatures to 2° C above pre-industrial levels. According to John Shepherd, chair of the Royal Society’s 2009 geoengineering study that featured ‘Plan B’, “We are already staring 1.6° C in the face.”[6]  Six years later climate scientists warn Greenland and Antarctic ice melt is already so rapid that the 2° C increase limit is no longer reliable and that a “sea level rise of several meters” could render such coastal cities as London, New York, and Shanghai uninhabitable during this century, unless immediate countervailing global action is taken.[7]

We have been prepped to bite the new geoengineering bait for some time now. In 1997, Edward Teller popularized the idea of a “sunscreen” for planet Earth in the Wall Street Journal.[8] Two years later Dr. Teller’s protégé Ken Caldeira co-wrote the paper that “crunched the numbers” to show that indeed a stratospheric aerosol sunscreen could work to counteract the effects of sharply increasing CO2.[9] Ever since geoengineers and their funders[10] have inched their way toward a rough consensus, hedged about with caveats, that solar radiation management (SRM) — placing reflective aerosols in the stratosphere — is the best, and least expensive, “solution” currently available to “the climate problem.”

In June 2015 geoengineer Caldeira proclaimed, “There is a chance climate change will prove truly catastrophic, with people suffering and dying in many parts of the world….The only thing politicians can do to cause Earth’s climate to cool within their terms in office is to reflect more of the sun’s warming rays back into space” [emphasis added][11] Though the movement toward consensus about climate intervention is not without serious debate and strenuous dissension, the repetitive warnings of imminent climate disasters sways the dialogue ineluctably toward eventual “intervention.” And this is likely the outcome the US and its NATO allies wish for, and perhaps as well the Russians, as it would serve as a perfect cover for what many believe are ongoing, classified geoengineering activities.

The path of climate intervention is well worn. It reveals tracks old as well as fresh, footprints we are ill advised to ignore, despite the complicit silence of corporate media, academia, and of course, governments and their military establishments.

And so the road to future world climate negotiations is paved with intentions both good (Jeykllian) and above all unknown (Hydean), and obscured by a long history of denial, prevarication, outright deceit, and collective inattention.

[3] Hugh Gusterson, Nuclear Rites: A Weapons Laboratory at the End of the Cold War (Berkeley, CA: University of California Press, 1996).

Ian Baldwin is a life-long environmentalist and co-founder and Publisher Emeritus of Chelsea Green. After working for several national environmental organizations in the 1970s, he co-founded the EF Schumacher Society (US) before launching Chelsea Green in 1984 with his wife Margo Baldwin. In 2005, he and Rob Williams co-founded Vermont Commons: Voices of Independence to explore the possibilities of rescaled living in a future Vermont republic.