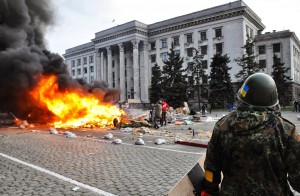 Council of Mothers of May 2  –  Odessa, Ukraine

At 12:00 on 7 June in Odessa, Ukraine, a crowd of Nationalists carried out a siege of the Court of Appeals. They threatened to set fire to the building and kill the judges hearing the case of Yevgeny Mefёdova, who has been held in prison since the massacre of 46 people in Odessa’s House of Trade Unions on May 2, 2014.

Mr. Mefёdova had nothing to do with the massacre. In fact, he was a victim of that tragedy, which was carried out by a mob led by Nationalists. When the judges today decided to finally release Mr. Mefёdova from custody, the Nationalists barricaded the doors to the courtroom and threatened to repeat the massacre of 2014. All this was recorded by video cameras:

The situation was only resolved when police in the courtroom arrested – not the Nationalists, but Mr. Mefёdova, on the charge of violating public order during a previous hearing! He was then taken by police to the detention center, where he will be held in administrative detention for 72 hours.

None of the Nationalists were arrested.

While today’s situation at the Court of Appeals ended without bloodshed, the actions by the Nationalists were blatantly illegal and demonstrate just how far Ukraine has descended into a full catastrophe of the rule of law.

The Council of Mothers of May 2, which is calling for an international investigation into the events of May 2, 2014, is closely following this situation. We call on the governments of all the democratic countries of the world to demand that the Ukrainian Justice authorities immediately release Yevgeny Mefёdova from custody and put an end to the current reign of terror by the Nationalists.