No Warlords Need Apply: A call for credible peacemaking in Afghanistan

By Kathy Kelly and Buddy Bell 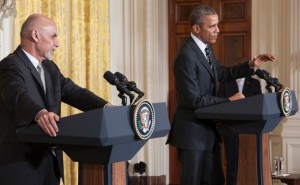 Obama and Ghani carve up Afghanistan in America’s interests.

A second round of peace talks between Afghan government officials and Taliban representatives, expected to begin before the end of July, 2015, suggests that some parties to the fighting want to declare a cease fire. But even in the short time since the first round on July 7th, fighting has intensified. The Taliban, the Afghan government forces, various militias and the U.S. have ramped up attacks, across Afghanistan.

Some analysts say the Taliban may be trying to gain territory and clout to give them leverage in “peace talks.” Taliban forces, apparently beginning to splinter since the supposed death of Mullah Omar, are now competing with a new Islamic State presence in Afghanistan as various armed groups try to recruit new fighters from among ultra-conservative sectors of the regional population. Spectacular and frightening suicide bombings, hostage taking and a demonstrated capacity to force Afghan government soldiers into retreat or surrender might bolster a group’s claim to be effectively ejecting foreigners from Afghanistan. 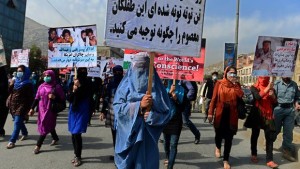 However, the U.S., with its history of waging aerial attacks, using helicopters and weaponized drones, and engaging in constant aerial surveillance, along with its continued night raids and detention of civilians, effectively carries itself as the most formidable warlord in the region.

Throughout June, according to the New York Times, “American drones and warplanes fired against militants in Afghanistan more than twice as much as they had in any previous month this year, according to military statistics.” On July 19th, 2015, U.S. helicopters even fired on an Afghan army facility in the Logar province, killing seven troops and wounding five others. The Afghan Ministry of Defense told CBS News that “coalition helicopters were flying through the area early Monday morning when they came under fire from insurgents. After the insurgents’ attack on the helicopters, the helicopters bombed the area, and as a result an Afghan army outpost was destroyed.”

Meanwhile, top U.S. military officials have met with president Ashraf Ghani to talk about extending the U.S. military presence in Afghanistan, beyond 2016, in light of a possible threat from Islamic State fighters. On July 19th, the Los Angeles Times reported that Gen. John Campbell, the top U.S. commander in Afghanistan, and Gen. Martin Dempsey, the Chairman of the Joint Chiefs, met with Afghan President Ashraf Ghani. Following the meeting, General Dempsey said he agreed that the U.S. needed to have a transnational strategy against the Islamic State. He said he would raise Ghani’s idea that Afghanistan “could serve as a hub from which the U.S., its allies and Afghanistan itself could work to prevent Islamic State from gaining followers in South Asia the way it has in the Middle East.” 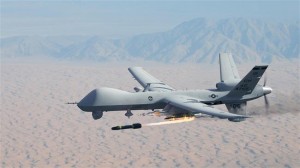 U.S. military officials diminish the credibility of any proposed cease fire when they suggest that the U.S. will, after all, consider maintaining bases and troops in Afghanistan far beyond the supposed 2016 evacuation of U.S. bases. Confidence in a ceasefire is further undermined when parties to negotiations know that the U.S. could assassinate them if they appear on a list of U.S. targets. 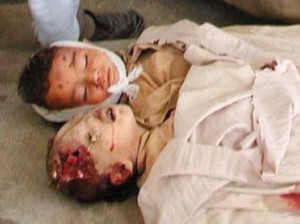 This is borne out on the ground in Afghanistan where the United Nations has been reporting record increases in civilian casualties.

Stopping the failed, counter-productive war against terrorism in Afghanistan and removing drones from her skies during peace talks would inspire respect for the idea of peace processes. Rural populations — the “constituency” of the Taliban in Afghanistan — fear the drones and look for protection, making them vulnerable to recruitment by armed militias vowing to eject the foreign militaries. The U.S. could  indicate that it doesn’t wish to keep military personnel in Afghanistan or maintain ongoing bases there. 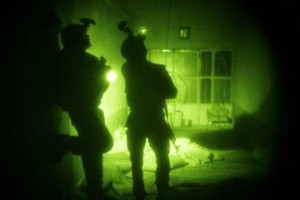 US soldiers abuse Afghans in a night-raid on their homes.

Yet, even were the U.S. to take these steps, a declared ceasefire between warlords who have, in the past, neglected the needs of Afghanistan’s poorest communities, whose war making has exacerbated suffering and poverty, may not be very meaningful to ordinary people living in rural areas. Whose interests would the warlords aim to secure?

It seems that the most crucially needed ceasefire agreement, in Afghanistan, would be one that occurred among ordinary communities, agreeing to no longer cooperate with warring parties, to no longer allow warlords to use them as pawns. This kind of ceasefire might fill the need and longing for peace so often expressed by people who are weary of living through wave after wave of destruction.

But ordinary Afghans living in rural areas need to feed their children, plant crops, restore irrigation systems, replenish their flocks and rehabilitate their agricultural infrastructure in order to survive. If they could have some realistic assurance of sustained resolve to help them reach these goals, they’d have good reason to link up and rise up in opposition to continued war.

What source of funding and skill could possibly offer the assistance required for this kind of rebuilding?

The U.S. military doesn’t hesitate to demand sums for continued U.S. military presence in Afghanistan which could instead be dedicated to rebuilding the country. The U.S. should state that it wishes to pay reparations for suffering caused in the past. This could be done in the form of setting up an escrow account to be administered by an NGO or agency that has not been accused of succumbing to corruption in Afghanistan.

By doing so, the U.S. could credibly begin to withdraw from warlord status in Afghanistan, and apply itself to being part of reconstruction, setting a model desperately needed throughout the world.