ISIS is a real monstrosity, one of the many horrifying consequences of the US sledgehammer, which among other crimes, incited sectarian conflicts that may by now have destroyed Iraq finally and are tearing the region to shreds.  The almost instantaneous defeat of the Iraqi army was quite an astonishing event.  This was an army of 350,000 men, heavily armed, trained by the US for over a decade.  The Iraqi army had fought a long and bitter war against Iran through the 1980s.  As soon as it was confronted by a few thousand lightly armed militants, the commanding officers fled and the demoralized troops either fled with them or deserted or were massacred.

By now ISIS controls almost all of Anbar province and is not far from Baghdad.  With the Iraqi army virtually gone, the fighting in Iraq is in the hands of Shiite militias organized by the sectarian government, which are carrying out crimes against Sunnis that mirror those of ISIS.  With crucial assistance from the military wing of the Turkish Kurds, the PKK, the Iraqi Kurdish Peshmerga has apparently held off ISIS.  It seems that the PKK are also the most significant force that rescued the Yazidi from extermination and are holding off ISIS in Syria, including the crucial defense of Kobane. 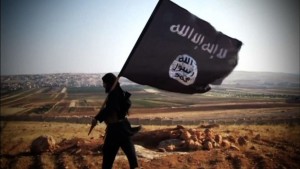 Meanwhile Turkey has escalated its attacks against the PKK, with US tolerance if not support.  It appears that Turkey is satisfied to watch its enemies – ISIS and the Kurds – killing one another within eyesight of the border, with awful consequences likely if the Kurds cannot withstand the ISIS assault on Kobane and beyond.

Another major opponent of ISIS, Iran, is excluded from the US “coalition” for policy and ideological reasons, as of course is their ally Assad.  The US-led coalition includes a few of the Arab oil dictatorships that are themselves supporting competing jihadi groups.  The major one, Saudi Arabia, has long been the major source of funding for ISIS as well as providing its ideological roots—no small matter.

ISIS is an extremist offshoot of Saudi Wahabi/Salafi doctrines, themselves an extremist version of Islam; and a missionary version, using huge Saudi oil resources to spread their teachings throughout much of the Muslim world.  The US, like Britain before it, has tended to support radical fundamentalist Islam in opposition to secular nationalism, and Saudi Arabia has been a primary US ally since the family dictatorship was consolidated and vast oil resources were discovered there.

The best informed journalist and analyst of the region right now, Patrick Cockburn, describes US strategy, such as it is, as an Alice-in-Wonderland construction, opposing both ISIS and its main enemies, and loosely incorporating dubious Arab allies with limited European support.  An alternative would be to adhere to domestic and international law: appealing to the UN Security Council and then following its lead, and seeking political and diplomatic avenues to escape from the morass or at least mitigate its horrors.  But that is almost unthinkable in US political culture.