They have descended from homes built on the mountainside. Women sit together in the cemetery not to mourn but to wait for the duvet distribution to begin. When I approach them, each woman extends a hand in greeting. Some have the needed small stamped pieces of paper to receive two duvets but most don’t. 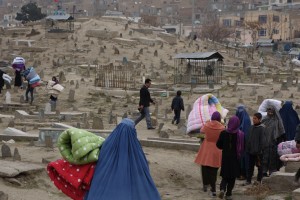 Bearing quilted bed covers, Afghans walk through the cemetery to their mountainside homes.

One of the women tells me about the pain in her chest, her legs. She talks about the war. I listen to all the manifestations of her suffering. I understand only a handful of words but as she clasps my hand, I know she wants my help in receiving a pair of duvets, too. I tell her I don’t make any decisions here. It is the elder representative of the neighborhood who determines who receives the quilted bed covers. Standing with the women, I say I’m sorry I’m sorry. All other words fail me.

Someone calls me over to the truck as the distribution will soon begin. In the Afghan gesture of greeting and leave-taking, I place my right hand over my heart and say goodbye.

A balloon seller approaches. A boy wheels a cart of apples nearby. Where a crowd gathers, there’s a potential sale, but no one buys. So the sellers observe the scene as I do. Colorful duvets, like clouds enveloping the bearers, seem to float by. I take a photo of a pair of girls. They become my shadow, following me and requesting more pictures.

The truck piled high with duvets is in a narrow gated car park. Perhaps two times as many people arrive as have the needed pieces of paper. The crowd presses towards the open gate, hoping. I observe one of the volunteers at work. Abdulhai has just finished 12th grade and is one of the founding members of the Afghan Peace Volunteers with a gift for crowd control.

Instead of  pushing the crowd back with outward facing palms, he smiles and snaps his fingers so the children laugh. He speaks kindly and softly. Both children and adults stop trying to edge forward, at least while he’s there. Their shoulders visibly relax. Some return smiles.

It isn’t that they want to be there, Abdulhai says a couple nights later about those who show up without a ticket. The people are desperate. Understanding without judgment seems the key to Abdulhai’s gentle effectiveness. 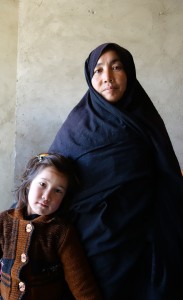 Safeh is one of 60 women sewing for this winter’s duvet project of the Afghan Peace Volunteers. Safeh Zakira says she wants to continue sewing. Before this work, she would sometimes break the shells of almonds, using the shells as fuel. I wonder how much heat such shells can generate, then learn her family also heats with coal. She lifts her hands. They are covered in coal dust.

Her husband is a day laborer, laying mud on walls. Most days he can’t find work. When he does work, his average pay is 300 Afghanis a day, but in the winter he earns less, 200 Afghanis. So many are seeking work that employers take advantage of the situation. Officially, Afghanistan has 40% unemployment. The unofficial estimate is higher: more than 80%.

Safeh Zakira’s family lives in a rented home that costs 2,500 Afghanis a month. They also pay for water, 500-1,000 a month. I think about her coal-covered hands, the cost of water.

Along with the finished duvets, she arrived today with a bag of the remainder material. (The cover fabric, polyester stuffing and thread were all issued about a week earlier.) I remark on this act of returning the extra stuffing. Honesty is important, she says. 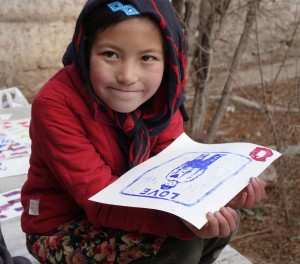 Asma added a red potato print to her page.

Safeh Zakira learned about the duvet project from her neighbor. She asked where this place was and took the initiative to come and ask to be involved. A team of Afghan Peace Volunteers visited her home to survey her home situation and gave her employment.

Another woman, standing nearby, explains she was hoping to sew, too, but when she got here, she learned the project is already full. Ali, a student volunteer, took her name so that the volunteers can help her in some other way. She will receive a duvet. I worry about the investment in taxi fare as she traveled for an hour. Fortunately, the fare is by trip, not by the number of passengers, so she didn’t lose money. Safeh Zakira is given money for transportation as well as for the sewing, and the women traveled together.

Safeh Zakira tells me she hopes there will always be work for her, not just with this winter’s duvet project. What the people need, she says, is work so that they can provide for their family.

Aaron Hughes, of Iraq Veterans against the War, leads a pair of art workshops.

The workshop has two rules.

First, if you get paint on your fingers, you can’t touch your clothes.

Second, there is no mixing of colors, so a potato dipped into the red paint shouldn’t later be dipped in the green or orange paint. Rule two is blissfully ignored. Not following the rules is how they have survived, Hakim says.

Twenty-some child laborers have joined the afternoon workshop. One boy shows me the design he has printed from potatoes cut into the shape a leaf and a star. The boy names his flower  design in English and asks me how it is.

Maqbool, I answer. Beautiful. Later, he approaches me holding a relief print in each hand, eager for more praise. Listen for the chuh-chuh-chuh, Aaron says, imitating the sound the roller makes when it is sucking up blue paint. He directs Imam, another boy at the street kids school, to make sure the roller catches the corners of the linoleum. Imam’s eyes brighten as he lifts the paper to reveal his self-portrait.

In less than an hour, the children have gone through one hundred sheets of paper, which they’ve spread out on the grass to dry. A few girls and boys walk between the designs, leaning over to pick some up for a closer look before turning their gaze to others. It is as if they are smelling flowers.

Carolyn Coe is part of a Voices for Creative Nonviolence (www.vcnv.org) delegation to visit the Afghan Peace Volunteers (ourjourneytosmile.com) in Kabul. She lives in Maine.