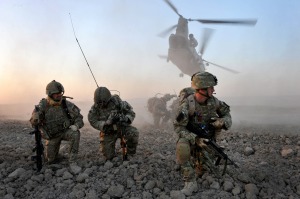 News agencies reported this morning that weeks ago President Obama signed an order, kept secret until now, to authorize continuation of the Afghan war for at least another year. The order authorizes U.S. airstrikes “to support Afghan military operations in the country” and U.S. ground troops to continue normal operations, which is to say, to “occasionally accompany Afghan troops” on operations against the Taliban. The administration, in its leak to the New York Times, affirmed that there had been “heated debate” between Pentagon advisers and others in Obama’s cabinet chiefly concerned not to lose soldiers in combat.

Oil strategy isn’t mentioned as having been debated and neither is further encirclement of China, but the most notable absence in the reporting was any mention of cabinet members’ concern for Afghan civilians affected by air strikes and ground troop operations, in a country already afflicted by nightmares of poverty and social breakdown. Here are just three events, excerpted from an August 2014 Amnesty International report, which President Obama and his advisors should have considered (and allowed into a public debate) before once more expanding the U.S. combat role in Afghanistan:

2. A U.S. Special Operations Forces unit was responsible for extrajudicial killing, torture and enforced disappearances during the period of December, 2012 to February, 2013. Included among those tortured was 51 year old Qandi Agha, “a petty employee of the Ministry of Culture,” who described in detail the various torture techniques he suffered. He was told that he would be tortured using “14 different types of torture”. These included: Beatings with cables, electric shock, prolonged, painful stress positions, repeated head first dunking in a barrel of water, and burial in a hole full of cold water for entire nights. He said that both US Special Forces and Afghans participated in the torture and often smoked hashish while doing so.

3. On March 26, 2013 the village of Sajawand was attacked by joint Afghan—ISAF (International Special Assistance Forces). Between 20-30 people were killed including children. After the attack, a cousin of one of the villagers visited the scene and stated, ”The first thing I saw as I entered the compound was a little child of maybe three years old whose chest was torn apart; you could see inside her body. The house was turned into a pile of mud and poles and there was nothing left. When we were taking out the bodies we didn’t see any Taliban among the dead, and we didn’t know why they were hit or killed.” 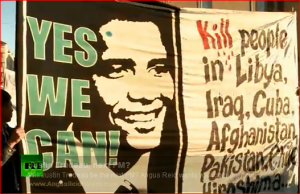 NYT coverage of the leaked debate mentions Obama’s promise, made earlier this year and now broken, to withdraw troops. The article doesn’t make any other mention of U.S. public opposition to a continuation of the war. Attempts to remake Afghanistan by military force have resulted in warlordism, ever more widespread and desperate poverty, and bereavement for hundreds of thousands whose loved ones are among the tens of thousands of casualties. Area hospitals report seeing fewer IED injuries and many more bullet wounds from pitched battles between rival armed militias whose allegiances, Taliban, government, or other, are hard to determine.

With 40% of U.S. weapon supplies to Afghan security forces now unaccounted for, many of the weapons employed on all sides may have been supplied by the U.S. Meanwhile the implications for U.S. democracy aren’t reassuring. Was this decision really made weeks ago but only announced now that congressional elections are safely over? Was a Friday night cabinet leak, buried between official Administration announcements on immigration and Iran sanctions, really the President’s solution to the unpopularity of a decision affecting the lives of so many? With concern for the wishes of U.S. citizens given so little weight, it is doubtful that much thought was given to the terrible costs of these military interventions for ordinary people trying to live, raise families and survive in Afghanistan. But for those whose “heated debates” focus solely on what is best for U.S. national interests, here are a few suggestions:

1. The U.S. should end its current provocative drive toward military alliances and encirclement of Russia and China with missiles. It should accept pluralism of economic and political power in the contemporary world. Present U.S. policies are provoking a return to Cold War with Russia and possibly beginning one with China. This is a lose/lose proposition for all countries involved.

2. By a resetting of policy focused on cooperation with Russia, China and other influential countries within the framework of the United Nations, the United States could foster international mediation.

3. The U.S. should offer generous medical and economic aid and technical expertise wherever it may be helpful in other countries and thus build a reservoir of international goodwill and positive influence.

That’s something that nobody would have to keep secret.

Kathy Kelly (kathy@vcnv.org) co-coordinates Voices for Creative Nonviolence (www.vcnv.org) While in Afghanistan, she is a guest of the Afghan Peace Volunteers (ourjourneytosmile.org)