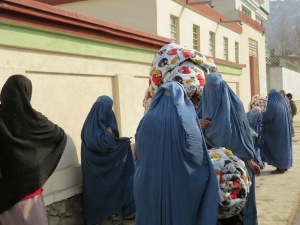 Kabul—Yesterday, in the Afghan Peace Volunteers’ (APVs’) “Borderfree Center” here in Kabul, I heard someone banging on the front gate and hurried downstairs to open it. As it happened, I was the only one at the Center that morning. Outside the gate stood two women with their burkas pushed back.

They had come a long way on foot. Reza Gul, the younger of the two, told me, as they stepped into our front yard, that they had walked for an hour and a half through Kabul to reach us. Zahro, the older woman, smiled and asked that I please put both of them on “the list.” Both women were desperate for the APVs to include them in “The Duvet Project,” which would allow them, for a few months, to provide for their families by making heavy blankets, called duvets.

These heavy quilts, stuffed with wool, can make the difference between life and death during Kabul’s extremely harsh winters. For the past two winters, the APVs have relied on women in their local area to manufacture thousands of duvets which are then distributed free of charge. The women are paid a living wage for their labor. 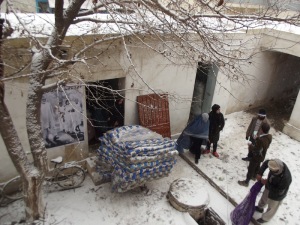 Last winter, 60 women, 20 from each of Afghanistan’s three main ethnic groups, made, between them, 3,000 duvets for Kabul’s poorest, all in the name of practicing nonviolent solutions for Afghanistan.

It’s a good project. Along with bringing needed warmth to destitute families, it invites people from different walks of life to work together. And, in a society where women have few if any economic opportunities, the women’s earnings help put food on the table and shoes on their children’s feet.

But each year, many women have not been included in the project. As in years past, it’s likely that Zahro and Reza Gul will be part of a steady stream of women who come to the door, refuse to leave, and insistently beg us to understand their desperation. Some will shout, many will break down in tears. Very few will go away without having sat in the courtyard or stood helplessly outside the gate for several hours. 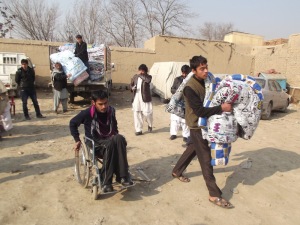 Zahro and Reza Gul patiently listened to my fumbling attempts, in their Dari language, to explain that I was useless in this situation. Zahro then pointed to her arms and legs, telling me she had pains. She tilted her head back and listed the other troubles she faced, but occasionally she’d stop and flash me a lovely, kind smile. She knew I understood very little of what she was saying. Beneath her scarf wisps of grey were showing. It was surely hard for her to contemplate walking back to Barchi without succeeding in her appeal to be placed on the list. Eventually, she sat down on the ground, in a corner just inside the gate, covered her eyes with her scarf, and began to cry.  She told me her family has no food.

Sonia and Marzia, the young women assembling the list, had hiked earlier that morning up a nearby mountainside to visit families, mainly widows and orphans, as part of a survey to assure that the women who are paid to make the duvets are among those in most acute need. Finally, our young friend Sonia returned from her surveying trip. I excused myself, knowing that a Westerner’s presence can confuse things.

Later that afternoon, when I returned from running an errand, two more women wearing burkas were sitting downstairs; several more were upstairs. They will come, constantly, persistently, desperately. 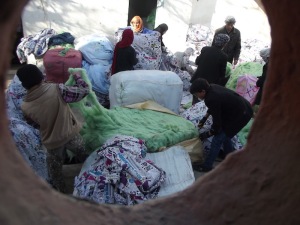 I wish they could knock on the gates of the Pentagon, and refuse to go away. Actually, they have something in common with U.S. military generals who won’t go away either. The Pentagon has requested $58.6 billion, for Fiscal Year 2015, to fund U.S. troops in Afghanistan.

When I shared this statistic with young friends here, their eyes widened. How does any group ever spend so much money? What has the U.S. accomplished since it first began bombing, invading and occupying Afghanistan in 2001? The Taliban controls over 70% of the country. Kabul is surrounded by hostile forces. And although the U.S. spent 7.6 billion over 13 years trying to eradicate poppy farming, opium poppy cultivation in Afghanistan hit record levels in 2013.

The International Business Times notes that profits from the trade help fund corruption within the country, maintain criminal networks and support the Taliban.

Meanwhile, in the U.S., one of the world’s wealthiest nations, desperate poverty continues to afflict multitudes, especially children. “A 2013 report by the United Nations Children’s Fund noted that, of the 35 economically advanced countries that had been studied, only Romania had a higher percentage of children living in poverty than did the United States.”

The Universal Declaration of Human Rights, the basic human rights document which the world’s nations agreed upon in the wake of World War II, doesn’t only establish the right to work for a fair wage in a safe environment (Article 23), a right that Reza Gul and Zahro try so hard to claim; it doesn’t only establish the right to a decent standard of living with food and even healthcare (Article 26); it also establishes the right “to seek, receive and impart information and ideas through any media” (Article 19) – not merely the right to freedom of the press, but the right to receive information necessary to participation in the life of the society. 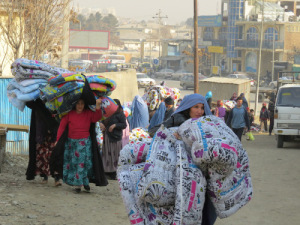 U.S. people have a right to learn about people bearing the consequences of U.S. war, but there is scant incentive to exercise this right in a society where militarism is glorified and military spokespeople continually assure the U.S. public that U.S. militarism has improved the lives of women and children in Afghanistan.

If people in the U.S. could become knowledgeable and well-educated about the world being shaped in their name, about the lives and hopes being disfigured by U.S. wars and weapons, they might resist pouring crucially needed resources down the rat hole of military spending.

We have a chance to help at least some women here in Kabul. Some of these women won’t have to go away. Some will gain the chance to support their families and make a meaningful contribution to meeting the needs of others. Although the promises held forth by the UDHR are seldom kept, although no nation observes all of the rights listed, nevertheless, everyone is on the list. Every Afghan women is “born free and equal in dignity and rights,” according to the UDHR, and deserves every listed right.

For now, the Duvet Project will help those few women the APVs can bring in, and Sonia tells me there is a good chance that Zahro and Reza Gul can be included. If so, they will each earn $2.70 for each duvet they make.

U.S. generals are angling to add an extra 6 billion to the 2015 U.S. “defense” budget. I welcome a small opportunity to help secure the rights of the women who won’t go away.

Kathy Kelly (kathy@vcnv.org) co-coordinates Voices for Creative Nonviolence (www.vcnv.org) and is an Honorary Member of PIPR. While in Kabul, she is a guest of the Afghan Peace Volunteers (ourjourneytosmile.com).