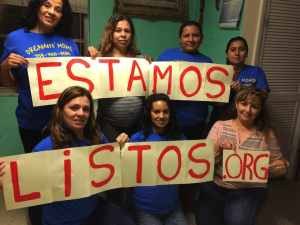 On the morning of Oct. 8, a group of US veterans who were deported to Mexico, in some cases after having fought in U.S. wars, congregated in Plaza Ochoa, Nogales, Sonora. They were joined by members of Dreamer Moms International, which advocates for women deported while their children stayed in the U.S., by the Mesoamerica Migrants’ Movement, and by other solidarity activists from both sides of the border.

The group marched from the plaza to the port of entry facility where they planned to meet a simultaneous march organized on the U.S. side by Veterans for Peace. However, the group coming from the U.S. side was delayed by police, so the veterans and their supporters held forth in front of the border crossing for half of an hour.

While U.S. customs agents sat at their computer banks serving as fibers in the cheesecloth of U.S. global capital, which allows the sale of mass-produced goods across the border but prohibits most people from selling their labor on any other terms than desperate submission, they and the people waiting in line were in earshot of the marchers’ chants, such as “no human being is illegal!” and “deported veterans: bring them home!”

Neither were the government policies of Mexico— some of them taken at the behest of the U.S.— immune from criticism. Ana Enamorado, mother of Oscar Lopez Enamorado, spoke at the impromptu rally:

And we are thousands who suffer this ache, this tragedy of not knowing what has happened to our sons and daughters.

Just as I am here, I know that all the Central American mothers would have liked to be here too, but no, it isn’t possible. I am here representing them, and demanding the truth. Migrants must be respected. We have to be able to know what happened to them. I had to come from my country, Honduras, in order to search all of Mexico without knowing where I would find him, how I would find him. But my struggle continues.

I thank all of you here for your support, for the invitation to be in this march because this is one way to support us.

We have to form a network, like my companion here told us before, to search, to struggle together. I know that working together we can achieve many things.

There are many people who don’t know about what has been occurring, but I want them to know there’s so much tragedy, so much violence. We tell about what happened to us so that it empowers action. We have to do something. We have to work to avoid having it occur again.”

Eventually, the marchers on the U.S. side were able to enter Mexico through one of the traffic lanes. Together, the combined march weaved through city streets until circling back to International Blvd. and flowing parallel to the 30-feet high grate of steel bars demarking the border. Others who did not cross the border flowed in a procession on the other side. The two rivers of humanity came to rest at two small stages directly across the border from each other. At this point a trans-border rally commenced with the people on both sides of the wall. It had been planned by School of the Americas Watch, a group that focused on a US Army school that trains soldiers from other nations in the Americas before doing extensive organizing on the issue of the border.

“I was deported over 12 years ago from my family, and I served in the U.S. military from 1995 to 2001. I was in Eloy [immigration detention center] for over a year. I’ve been separated from my family, and there are many brothers and sisters that are also separated from their families. The United States intervenes around the world whether it’s right or it’s wrong. We were asking for the Berlin Wall to be brought down yet we’re building another one.

We need to tear this wall down! It separates families, neighbors, and others of the human race.

So I want to thank everybody. I love you guys and— that’s my country— I’m very excited for all of you guys to be here. We just want to return to our families. Thank you!”

Although the march through Nogales, Mexico covered a variety of specific struggles regarding accountability and freedom of movement, what unites them is the urgent call for a shift in thinking— a refusal to accept that human beings can be counted as worthy or unworthy to cross a geographical line. The desire for such a shift is also what inspired the rest of the planned border convergence weekend, which has been extensively reported elsewhere.

As an 18-year-old from Indiana, I moved to south San Diego to live in a Spanish-speaking enclave. Working at a gas station with many coworkers who crossed the border each day for work, I got a lot of guided tours of Tijuana, and these back-and-forth visits exposed me to just how blatant vast disparities in wealth can be.

Later, I met Rosa (not her real name) while working in a restaurant in Chicago, where I now live. We worked at the same prep station each day, and over the months, I met her husband and kids. Eventually Rosa became comfortable enough to tell me she had crossed the desert as a teenager to arrive in the U.S.

The following summer I decided I had to visit this desert, so I signed up to volunteer with No More Deaths, a network of activists who camp in the desert south of Tucson and maintain hundreds of water stations of about 10 jugs each. This I did for a couple of years while I was on summer vacation from driving school buses.

When SOA Watch announced that they would try to bring thousands of activists to southern Arizona for a trans-border Encuentro, I knew I had to attend. I understand that countless people’s hopes for the future would be brightened by so much new attention being focused on the border. As Ana Enamorado tells us, “I know that working together we can achieve many things.”