Possibility of Escape: Kathy Kelly’s Account of Her Time in Jail 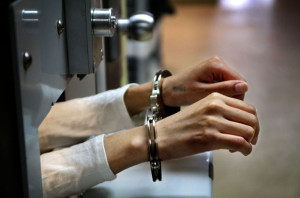 That is also us, the possibility of us, if the wonderful accident of our birth had taken place elsewhere: you could be the refugee, I could be the torturer. To face that truth is also our burden. After all, each of us has been the bystander, the reasonable person who just happens not to hear, not to speak, not to see those people, the invisible ones, those who live on the other side of the border.

It was a little over two weeks ago that Marlo entered Atwood Hall, here in Lexington federal prison. Nearly all the women here are nonviolent offenders. When I first saw Marlo, her eyes seemed glued to the tiled floors as she shuffled along hallways. I guessed her age to be 25 or so. A few days later, she came to a choir rehearsal. She was still shy, but she looked up and offered a quiet smile when she joined the soprano section. The next time our choir gathered, Marlo raised her hand before we ended our rehearsal. “I got something to say,” she said, as she stood. “When I first came here, I can tell all of you now, I was terrified. Just plain terrified. I have 70 months, and I felt so scared.” The intake process for this, her introduction to the prison system, had badly frightened her, but before sundown that same day, a second intake process had occurred, with several inmates finding her, reassuring her, and getting her beyond that first panic.

During my four stints in U.S. federal prisons, I’ve witnessed long-term inmates’ unconquerably humane response when a newcomer arrives. An unscripted choreography occurs and the new prisoner finds that other women will help her through the trauma of adjustment to being locked up for many months or years. Halfway through a three-month sentence myself, I’m saddened to realize that I’ll very likely adapt to an outside world for which these women, and prisoners throughout the U.S. prison system, are often completely invisible.

U.S. state and federal prison populations have risen, since 1988, from 600,000 to an estimated 1,600,000 in 2012. This trend shows inhumane behavior on the part of lawmakers and myriads of employees who benefit from the so-called “criminal justice” system. But our entire society bears responsibility for what now can aptly be labeled a “prison-industrial complex.” Constructing prisons and filling prisons with people who posed little or no threat to our security didn’t happen secretively, without our consent. We watched, mesmerized perhaps, and allowed ourselves to become a country with the world’s largest prison system.

A friend from home recently sent me encouraging news of Illinois Governor Rauner’s initiative to address the problems in some of the United States’ most brutally overcrowded prisons. A Chicago Tribune article from several weeks ago notes that Rauner plans to reduce the state’s prison population by 25% over the next ten years, establishing the reduction as a goal through executive order.  The article, by columnist Eric Zorn, cites a widely-cited recent report by the Vera Institute of Justice that “nearly 75% of the population of both sentenced offenders and pretrial detainees are in jail for nonviolent offenses like traffic, property, drugs or public order violations.” 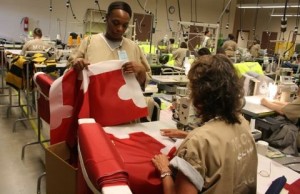 Skyrocketing costs of incarceration have finally convinced some lawmakers to work toward “reducing prison populations.” Yesterday, I read a long report about how the California Department of Corrections has responded to a court-ordered demand that the state reduce the numbers of people locked up in California state prisons. The order was first issued in 2009 by a three-judge panel. The state appealed the order, but in 2011, the U.S. Supreme Court upheld it, ordering the state of California to comply by 2013. The California government sought and was granted two extensions. As of now, the order insists that California must reduce its prison population, by 2016, to “no more than 137.5 percent of the design capacity” of its state prisons.

Whatever plans Gov. Rauner’s committee proposes for Illinois, the notoriously incarceration-minded Illinois state legislature is likely to put up just as vigorous a fight. Meanwhile the California report discusses “cost-effective measures,” “recidivism reduction results,” “rehabilitative programming” and “programming slots” at “in-state contract facilities.” The language, highly impersonal, suggests warehousing. I wonder if zookeepers might be more attentive to the individuality of the beings they cage.

Trapped in a cruel and uncaring system, women here in Atwood Hall reliably find humane ways to cope. Among many signs of daily generosity, one of my favorites is the practice of “window shopping.” Women place extra items they can spare in the window sills nearest the stairwells. A new prisoner can find new fresh socks, a warm knit cap, books, magazines, pitchers – items that quickly disappear and are soon replenished.

Perhaps we’ll begin to see a trend toward finding humane ways to cope with seemingly intractable problems in today’s criminal justice system. The U.S. Supreme Court’s insistence that the State of California must release many thousands of prisoners signals a trend in which, as Gov. Rauner’s order recognizes, “States across the country have enacted bi-partisan, data driven and evidence based reforms that have reduced the use of incarceration and its costs while protecting and improving public safety.” Zorn notes that the Mac Arthur Foundation recently granted $75 million for a 5 year “Safety and Justice Challenge” meant “to reduce over-incarceration by changing the way America thinks about its prisons and jails.” I can’t imagine a figure too high to pay, in dollars or in human work hours, to effectively challenge the way U.S. people think about safety and justice. In describing a class that he taught in a New Jersey maximum-security prison, Chris Hedges wrote:

The mass incarceration of primarily poor people of color, people who seldom have access to adequate legal defense and who are often kept behind bars for years for nonviolent crimes or for crimes they did not commit, is one of the most shameful mass injustices committed in the United States. The 28 men in my class have cumulatively spent 515 years in prison. Some of their sentences are utterly disproportionate to the crimes of which they are accused. Most are not even close to finishing their sentences or coming before a parole board, which rarely grants first-time applicants their liberty. Many of them are in for life. One of my students was arrested at the age of 14 for a crime that strong evidence suggests he did not commit. He will not be eligible for parole until he is 70. He never had a chance in court and because he cannot afford a private attorney he has no chance now of challenging the grotesque sentence handed to him as a child.

Here in Atwood Hall, guards and administrators know that they imprison humane, caring, generous and talented women, people not very different from their own relatives, friends and co-workers. Where are the “bad sisters” that could ever justify the punishment of isolating women like Marlo from their children and other loved ones for long and wearying years? I imagine that many BOP guards admire, as I do, the courage and fortitude of the women facing long sentences here. Do they wonder, sometimes, what courage would be required, in their own lives, to stop working as enforcers of the prison system? Or do they perhaps wish, sometimes, that the general public could muster up the will to stop voting for the prison system? 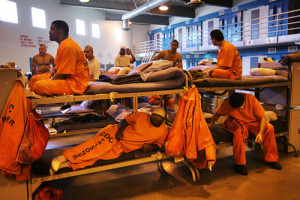 There is a cynical quote which a cynical friend of mine likes to quote to me, from the philosopher David Hume: “A prisoner who has neither money nor interest, discovers the impossibility of his escape, as well when he considers the obstinacy of the gaoler, as the walls and bars with which he is surrounded; and, in all attempts for his freedom, chooses rather to work upon the stone and iron of the one, than upon the inflexible nature of the other.” It’s the cliché of the prisoner attempting escape: the prisoner sees more hope tunneling out through bricks than appealing to the stone-faced jailer.

But who are the jailers? These prisons were built, and filled, in our name – in the name of making us “safer”. More guards, more lawyers, judges, wardens, marshals, probation officers and court personnel would be hired even if the present ones resigned. Meanwhile the creative work to create real security, real community in the face of social dislocation and crime, would still need to be done. We, the broader public, must be the jailers. Sometimes we seem to be a stone rolling down the path of least resistance. But we’re not stone. We can choose not to be jailers, and choose, instead, to be ever more inflexible in our resistance to injustice and to hatred born of fear.

I’m here among women, some of whom, I’ve been told, are supposed to be “hardened criminals.” Fellow activists incarcerated in men’s prisons likewise concur that the system is futile, merciless and wrongheaded. Our jailers, I’m convinced, can see this. Men like Governor Rauner, it seems, can see it, or his advisers can. Where are the inflexible ones keeping women like Marlo isolated from and lost to the world, trembling for their future for the next five years? I would like to make an appeal to you, and to myself two months from now when I’ve left here and once more rejoined the polite society of these women’s “inflexible jailers.” I choose to believe that we can be moved and these women can escape. I am writing this, as many have written and will write, to see if we’re easier to move than iron and stone.