Pushing Up: Kathy Kelly on Peacestock, Climate Change, and the US Military

Last weekend, about 100 U.S. Veterans for Peace gathered in Red Wing, Minnesota, for a statewide annual meeting. In my experience, Veterans for Peace chapters hold “no-nonsense” events. Whether coming together for local, statewide, regional or national work, the Veterans project a strong sense of purpose. They want to dismantle war economies and work to end all wars. The Minnesotans, many of them old friends, convened in the spacious loft of a rural barn. After organizers extended friendly welcomes, participants settled in to tackle this year’s theme: “The War on Our Climate.”

They invited Dr. James Hansen, an Adjunct Professor at Columbia University’s Earth Institute, to speak via Skype about minimizing the impacts of climate change. Sometimes called the “father of global warming”, Dr. Hansen has sounded alarms for several decades with accurate predictions about the effects of fossil fuel emissions. He now campaigns for an economically efficient phase out of fossil fuel emissions by imposing carbon fees on emission sources with dividends equitably returned to the public.

Dr. Hansen envisions the creation of serious market incentives for entrepreneurs to develop energy and products that are low-carbon and no-carbon. “Those who achieve the greatest reductions in carbon use would reap the greatest profit. Projections show that such an approach could reduce U.S. carbon emissions by more than half within 20 years — and create 3 million new jobs in the process.” 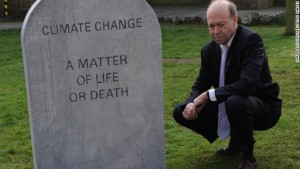 Dr. Hansen near a tombstone: “Climate change, a matter of life and death.”

Steadily calling on adults to care about young people and future generations, Dr. Hansen chides proponents of what he terms “the fruitless cap-and-trade-with-offsets approach.” This method fails to make fossil fuels pay their costs to society, “thus allowing fossil fuel addiction to continue and encouraging ‘drill, baby, drill’ policies to extract every fossil fuel that can be found.” Making fossil fuels “pay their full costs” would mean imposing fees to cover costs that polluters impose on communities through burning of coal, oil and gas. When local populations are sickened and killed by air pollution, and starved by droughts or battered or drowned by climate-change-driven storms, costs accrue for governments that businesses should repay.

What are the true costs to society of fossil fuels?   According to a recent International Monetary Fund (IMF) study, fossil fuel companies are benefiting from global subsidies of $5.3tn (£3.4tn) a year, $10 million per minute, every minute, each and every day. 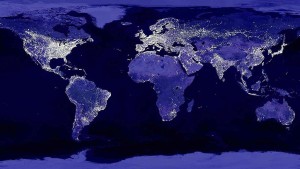 The Earth at night. Notice the post-industrial cities are the biggest polluters.

The Guardian reports that the $5.3tn subsidy estimated for 2015 is greater than the total health spending of all the world’s governments.

THE MADNESS OF NUCLEAR ENERGY

Dr. Hansen began his presentation by noting that, historically, energy figured importantly in avoiding slave labor. He believes some energy from nuclear power is now necessary for countries such as China and India to lift masses of their populations out of poverty. Many critics strenuously object to Dr. Hansen’s call for reliance on nuclear power, citing dangers of radiation, accidents, and problems with storage of nuclear waste, particularly when the radioactive waste is stored in communities where people have little control or influence over elites that decide where to ship the nuclear waste.

Other critics argue that “nuclear power is simply too risky, and more practically speaking, too costly to be considered a significant part of the post-carbon energy portfolio.” Journalist and activist George Monbiot, author of a book-length climate change proposal, Heat, notes that nuclear power tends to endanger “haves” and “have-nots” equally. Coal power’s   deadliest immediate effects, with historic casualties clearly outpacing those of nuclear, are linked to mining and industrial areas populated by people more likely to be economically disadvantaged or impoverished. Climate-driven societal collapse may be all the more deadly and final with grid-dependent nuclear plants ready to melt down in lockstep with our economies. But it’s crucial to remember that our direst weapons – many of them also nuclear – are stockpiled precisely to help elites manage the sort of political unrest into which poverty and desperation drive societies. Climate change, if we cannot slow it, does not merely promise poverty and despair on an unprecedented scale, but also war – on a scale, and with weapons, that may be far worse than dangers resulting from our energy choices. Earth’s military crisis, its climate crisis, and the paralyzing economic inequalities that burden impoverished people are linked. 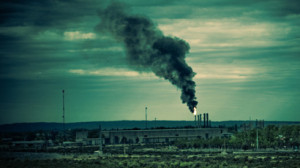 Pollution in the US.

Dr. Hansen thinks that the Chinese government and Chinese scientists might marshal the resources to develop alternatives to fossil fuels, including nuclear powered energy. He notes that China faces the dire possibility of losing coastal cities to global warming and accelerated disintegration of ice sheets.

The greatest barriers to solution of fossil fuel addiction in most nations are the influence of the fossil fuel industry on politicians and the media and the short-term view of politicians. Thus it is possible that leadership moving the world to sustainable energy policies may arise in China, where the leaders are rich in technical and scientific training and rule a nation that has a history of taking the long view. Although China’s CO emissions have skyrocketed above those of other nations, China has reasons to move off the fossil fuel track as rapidly as practical. China has several hundred million people living within a 25-meter elevation of sea level, and the country stands to suffer grievously from intensification of droughts, floods, and storms that will accompany continued global warming. China also recognizes the merits of avoiding a fossil fuel addiction comparable to that of the United States. Thus China has already become the global leader in development of energy efficiency, renewable energies, and nuclear power.

What’s missing from this picture? The Veterans for Peace earnestly believe in ending all wars. Deepening nonviolent resistance to war could radically amend the impact of world militaries, especially the colossal U.S. military, on global climate. In order to protect access to and global control of fossil fuels, the U.S. military burns rivers of oil, wasting the hopes of future generations in the name of killing and maiming the people of regions the U.S. has plunged into destabilizing wars of choice, ending in chaos. Corruption of the global environment and compulsively frantic destruction of irreplaceable resources is an equally sure, if more delayed, manner of imposing chaos and death on a mass scale.   The misdirection of economic resources, of preciously needed human productive energy, is yet another. Researchers at Oil Change International find that “3 trillion of the dollars spent on war against Iraq would cover all global investments in renewable power generation needed between now and 2030 to reverse global warming.”

John Lawrence writes that “the United States contributes more than 30% of global warming gases to the atmosphere, generated by 5% of the world’s population. At the same time funding for education, energy, environment, social services, housing and new job creation, taken together, is less than the military budget.” I believe that “low carbon” and “no carbon” energy and energy efficiency should be paid for by abolishing war. Lawrence is right to insist that the U.S. should view problems and conflicts created by climate change as “opportunities to work together with other nations to mitigate and adapt to its effects.” But the madness of conquest must end before any such coordinated work will be possible.

Sadly, tragically, many U.S. veterans fully understand the cost of war. I asked a U.S. Veteran for Peace living in Mankato, MN, about the wellbeing of local Iraq War Veterans. He told me that in April, U.S. veteran student leaders at Minnesota State’s Mankato Campus, spent 22 days gathering daily, rain or shine, to perform 22 push-ups in recognition of the 22 combat veterans a day – nearly one an hour – currently committing suicide in the U.S. They invited the Mankato-area community to come to campus and do pushups along with them. This is an historic time, posing a perfect storm of challenges to the survival of our species, a storm we can’t weather without “all hands on deck.” Whoever arrives to work beside us, and however quickly they arrive, we have heavy burdens to share with many others already lifting as much as they can, some taking theirs up by choice, some burdened beyond endurance by greedy masters. The Veterans for Peace work to save the ship rather than wait for it to sink.

Many of us have not endured the horrors that drive 22 veterans a day, and countless poor in world regions that U.S. empire has touched, to the final act of despair. I would like to think we can lift hopes and perhaps bring comfort to those around us by radically sharing resources, eschewing dominance, and learning to join courageous others in the work at hand.

This article was first published on Telesur English.