By Noam Chomsky and T.J. Coles 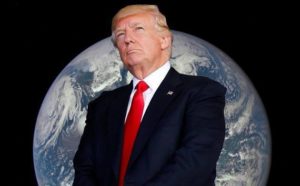 A few months ago, I interviewed Noam Chomsky as part of our new book Voices for Peace: War, Resistance and America’s Quest for Full-spectrum Dominance (2017, Clairview Books). The book also features original contributions from John Pilger, Cynthia McKinney, Ilan Pappé, and other leading activists and academics. This is an excerpt from the Chomsky interview.

How do you assess the Trump administration’s Syria policy?

No strategic policy is discernable.  After the chemical warfare atrocity, Trump ordered the bombing of a Syrian airfield that was the alleged source of the attack.  It was damaged, but apparently not too severely.  Military aircraft were flying bombing missions from there within days.  And there was no follow-up.  The act seems to have been designed for an American audience, instructed that at last Trump has become a true President.  There is little else that suggests some coherent policy or even thought.

Trump’s actual policies are uncertain, probably even to him.  But he has made at least some statements suggesting that he wishes to reduce tensions with Russia, a positive step.  The political class is mostly opposed and insisting on more confrontation.  The media are keeping to the usual guiding principle: ‘objectivity’ means reporting accurately what is happening within the circles of political power – ‘within the beltway’ in the US phrase, similarly in Britain.

And expanding Obama’s Pivot to Asia?

The general context is Trump’s commitment to militarism and private wealth and power, with the burden falling on the working class and the poor and vulnerable.  He is intent on ‘rebuilding our depleted military’, already by far the most advanced and powerful in world history, far ahead of any conceivable group of competitors, and providing more authority to the military to act free from civilian control.  ‘America first’, with a big fist but no nonsense about diplomacy and ‘soft power’.

How do you see the future of global trade under Trump?

Trump claims to be opposed to the [Trans-Pacific Partnership and Transatlantic Trade and Investment Partnership] deals, but has given no indication of what he prefers in their place.  He has given no clear ideas about what he thinks of the EU, just random arrows in all directions.  One of his few fairly clear positions is support for the most extreme right sectors in Israel, though even here he has hedged slightly.  The rest remains obscure.

The political leaders in South America are moving more to the right. How do you see the future of the region?

The left/center left governments of recent years achieved meaningful progress: sharp reduction in poverty, improvements in social justice, freeing the region from the clutches of the IMF (aka US Treasury Department), and others.  They also made many mistakes, crucially reliance on primary product export instead of diversifying the economy, and joining in the elite practice of massive corruption.  Many of the successes will probably survive the current regression, quite severe particularly in Brazil, the most important country of the region.  I suspect that this too will pass, and there will be a return to a more promising course of social and economic development.

What are the prospects for peace in Palestine under Trump?

Even lower than they have been for some time – unless we mean ‘the peace of the graveyard’.