From July 13 to July 20, I drove a small truck from Minneapolis, Minnesota down to McAllen, Texas. The truck went to Mexico and is now one of four vehicles on a ship destined for Cuba, donations made possible through the Interreligious Foundation for Community Organization/Pastors for Peace. The day after I arrived in McAllen, some local residents took a group of IFCO activists to Sacred Heart Church in downtown McAllen. 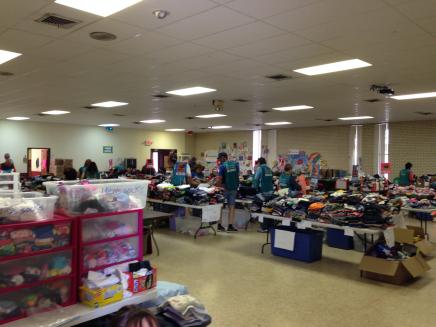 As the closest substantial U.S. city connected by land to the Isthmus of Tehuantepec and Mexico’s internal eastern coast, McAllen is the most convenient of any crossing point for immigrants from Honduras, El Salvador, and Guatemala. It is the place where Border Patrol detains the highest number of unaccompanied minors who are fleeing violence caused by U.S. foreign policy in Central America. Less noted in the media are the mothers and fathers traveling with their young children, but they are coming to McAllen as well, and they are usually the ones who can sometimes find temporary relief at Sacred Heart Church. 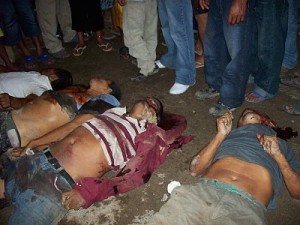 When we arrived at this church, it was a Sunday afternoon. I saw several large tents set up in the parking lot, along with a large camper that said “medical clinic” and also a large McAllen Police camper-like vehicle with floodlights. We were led inside the church building to a large reception hall filled with shelves of clothing and toys. It was packed with volunteers in green vests that said Catholic Relief Services. We spoke with Sister Leticia Benavides about the experience of an immigrant who comes to their church. First of all, I learned that unaccompanied minors are not released from Border Patrol custody in McAllen. I did not learn further information on where they take these kids. The immigrants who can get released in McAllen are adults and children that are accompanied by an adult parent. 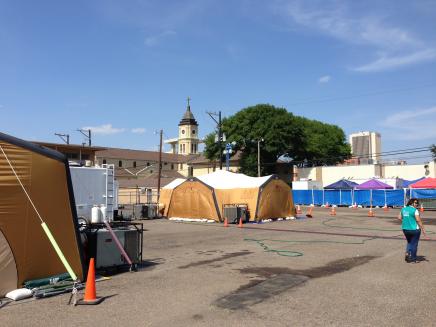 The conditions for release are that the immigrant has to demonstrate that they have a familial contact in the U.S. and must provide this person’s address. Second, the U.S. contact must purchase a will-call Greyhound bus ticket from McAllen to the closest Greyhound stop to where they live. Once these conditions are met, the immigrant is dropped off at the Greyhound station to pick up the ticket. Media claims of the government paying for bus tickets are false.

Sacred Heart has a volunteer at the Greyhound station waiting for anyone being dropped off. The volunteer tells the people being dropped off that if they want to, they may come to Sacred Heart church for a free shower, change of clothes, food and drink, medical attention, and a safe place to rest until their departure time. There is a shuttle between the Greyhound station and the church.

Sister Leticia told us that, by far, the majority of people that come in are fleeing from Honduras. When anyone new comes in, all the volunteers applaud for them in order to make it clear they are in a welcoming place. Then one or two volunteers guide the individual or family through whatever service they’d like to access first. When they are locked up, the immigrants are given milk and apples, supposedly the latest U.S. agriculture surplus. Those who are not used to consuming so much dairy then become sick. Many immigrants also come into Sacred Heart dehydrated since they are not accustomed to drinking tap water and do not trust the smell of McAllen water. Therefore, they drink as little as possible. At the church, they are given appropriate food and purified water. 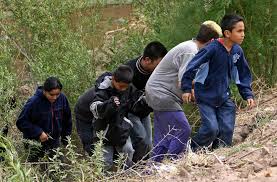 Crossing borders, riding freight trains, being extorted by coyotes and criminals and then locked in a cage by Border Patrol can all be very traumatic for a grown woman or man, let alone a child. Save the Children has a play therapy station set up in another section of the church to allow kids to play for the first time in a long while.

Because of privacy issues we did not observe this station. I did ask for and got permission to take a picture of the overall operation – inside the church’s main reception hall and the outside of the medical clinic and the air-conditioned tents that make up the resting area.

It’s absolutely crucial to realize that we saw a somewhat more decent side of what is happening at the US-Mexico border. What most often happens is that people fleeing their home situations are caught and abducted by Border Patrol, then sent back to an abusive husband or parent, sent back to Honduras to be disappeared by paramilitary forces supported by the U.S. or to El Salvador to be enlisted in a gang started in Los Angeles, California. If they elude Border Patrol they must walk days and days to reach Houston or San Antonio, and many of those who attempt this journey die along the way. 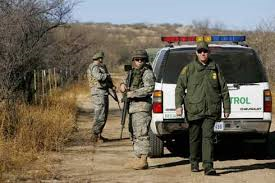 What can we do about this? Take nonviolent actions to force a change in government policy. Stop U.S. military and police aid to Honduras, Guatemala, and other places. The military and police in these countries are involved in death squad activity. Stop the U.S. State Department’s meddling in the elections of other countries. Stop the U.S. manipulation of other countries’ economies to favor rich, subsidized U.S. corporations at the expense of humble individual workers struggling to feed themselves and their families. Compel President Obama to follow through on his proposal to fund more immigration judges so that a judge can devote much more than 20 seconds of attention to each person’s case. Also, insist that he issue a moratorium on deportations until all asylum claims are fairly considered. Compel Congress to enact reasonable immigration policies that acknowledge current global realities and U.S. responsibility for them.

Buddy Bell has been a co-coordinator with Voices for Creative Nonviolence since January 2012. He has also organized actions in support of Afghans and in opposition to drones. http://vcnv.org/speaker-bio/buddy-bell