‘Somalia has been a forgotten emergency for years’

In Somalia, 260,000 people have died of starvation in the last few years. Three million are facing severe crisis. Millions more are refugees in Ethiopia, Kenya, and Yemen. In this exclusive, updated article for PIPR, Noam Chomsky explains how this round of Somalia’s long suffering occurred. It coincides with Oxfam’s call ‘for the world to remember Somalia’, http://blogs.oxfam.org/en/blogs/14-07-24-somalia-eight-warnings-catastrophe-so-far-and-no-action 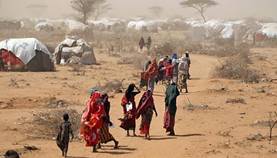 “This poor country keeps taking one blow after another,” Peter Goossens observed several years ago: “Ultimately, it will break.” The country is Somalia, where Mr. Goossens was the director of the World Food Program. The population of this tragic and tortured land was “marching right up to the edge of a crisis,” he continued. “Any additional little thing, any little flood or drought, will push them over.”

Five months earlier, the UN’s chief humanitarian officer, John Holmes, had called the Somali humanitarian and refugee crisis “the worst in the world.” Members of the African Union had promised to send peacekeepers if funding were made available. But Richard Cornwell, a senior researcher at the Institute for Security Studies in South Africa, says “there is no peace to keep [in Somalia] in the first place.” Apart from catastrophe for Somalis, Cornwell continued, “what the dear old West has created is exactly what it feared: a fertile ground for Islamist extremism.” 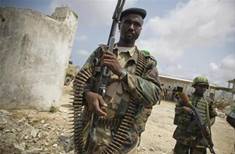 By November 2007, the UN regarded Somalia as the worst humanitarian crisis in Africa, with “higher malnutrition rates, more current bloodshed and fewer aid workers than Darfur,” Jeffrey Gettleman reported in the New York Times. The top UN official for Somalia, Ahmedou Ould-Abdallah, describes its plight as “the worst on the continent.” The head of UN humanitarian operations in Somalia, Eric Laroche, reports that the UN lacks the capacity to reach people who are hungry, exposed, sick and dying, “If this were happening in Darfur,” he added, “there would be a big fuss. But Somalia has been a forgotten emergency for years.”

One distinction, hard to miss, is that the tragedy of Darfur can be blamed on someone else, in fact an official enemy, while responsibility for the current catastrophe in Somalia, like others that preceded it, lies substantially in our own hands.

In October 1993, US troops withdrew from Somalia after a “rescue mission” that ended after two Black Hawk helicopters were shot down by Somalia militiamen, leaving 18 US rangers dead, along with perhaps 1000 Somalis. The departing Marines left “behind a hail of gunfire – a ratio of about 100 to 1,” Los Angeles Times correspondent John Balzar reported. Marine Lt. Gen. Anthony Zinni, who commanded the operation, informed the press that “I’m not counting bodies…I’m not interested.” CIA officials privately conceded that US forces may have killed from 7,000 to 10,000 Somalis while losing 34 soldiers, Charles William Maynes reported in Foreign Policy. The “rescue mission,” which may have killed about as many Somalis as it saved, left the country in the hands of brutal warlords.

“After that, the United States – and much of the rest of the world – basically turned its back on Somalia,” Gettleman reports. “But in the summer of 2006, the world started paying attention again after a grass-roots Islamist movement emerged from the clan chaos and seized control of much of the country,” leaving only an enclave adjoining Ethiopia in the hands of the Western-recognized Transitional Federal Government (TFG). 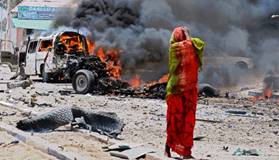 The Islamists “didn’t cause us any problems,” Laroche reports. Ould-Abdallah called the six months of their rule Somalia’s “golden era.,” the only period of peace in Somalia for years. Other UN officials concur, observing that “the country was in better shape during the brief reign of Somalia’s Islamist movement last year” than it has been since Ethiopia invaded in December 2006 to impose the rule of the TFG.

The Ethiopian invasion, with US backing and direct participation, took place immediately after the UN Security Council, at US initiative, passed Resolution 1725, which called upon all states “to refrain from action that could provoke or perpetuate violence and violations of human rights, contribute to unnecessary tension and mistrust, endanger the ceasefire and political process, or further damage the humanitarian situation.” The invasion by Somalia’s historical enemy, Christian Ethiopia, soon elicited a bitter resistance, leading to the current crisis.

The official reason for US participation in Ethiopia’s overthrow of the Islamist regime is the “war on terror” – which has engendered terror, quite apart from its own atrocities. Furthermore, the roots of the harsh Islamist regime trace back to earlier stages of the “war on terror.” One of its earliest acts was the closing of the Islamic charity Al-Barakaat on grounds that it was financing terror. This was hailed by government and media as one of the great successes of the “war on terror,” though Washington’s later withdrawal of its charges as without merit aroused little interest.

The greatest impact of the closing of Al-Barakaat was in Somalia. According to the UN, in 2001 the charity was responsible for about half the $500 million remittances to Somalia, “more than it earns from any other economic sector and ten times the amount of foreign aid [Somalia] receives.” The company also played a major role in the economy, Ibrahim Warde observes in his devastating study of Bush’s “financial war on terror,” The Price of Fear. This frivolous attack on a very fragile society “may have played a role in the rise…of Islamic fundamentalists,” Warde concludes – another familiar consequence of the “war on terror.”

The renewed torture of Somalia falls within the context of US efforts to gain firm control over the Horn of Africa, where the US is launching a new Africa command and extending naval operations in crucial shipping lanes, part of the broader campaign to ensure its domination of the world’s primary energy resources in the Gulf region and of Africa as well.

In the early postwar period, when State Department planners were assigning each part of the world its “function” within the overall system of US domination, Africa was considered unimportant. George Kennan, head of the Policy Planning Staff of the State Department, advised that Africa should be handed over to Europe to “exploit” for its reconstruction. No longer. The resources of Africa are too valuable to be left to others to exploit, particularly with China extending its commercial reach.

If poor Somalia collapses further into starvation and misery, that is merely a sideshow of grand geopolitical designs, of little moment.

Originally published as ‘The Somalia Syndrome’ in 2007. Noam Chomsky is Professor Emeritus at the Massachusetts Institute of Technology.