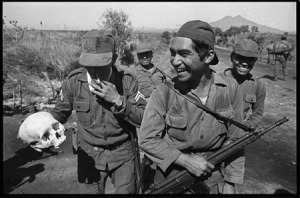 El Salvadoran death-squads, comparable to ISIS, trained, armed, and supported by the US.

On August 9, 1983, three people dressed as U.S. soldiers saluted their way onto a U.S. military base and climbed a pine tree. The base contained a school training elite Salvadoran and other foreign troops to serve dictatorships back home, with a record of nightmarish brutality following graduation. That night, once the base’s lights went out, the students of this school heard, coming down from on high, the voice of Archbishop Oscar Romero.

“I want to make a special appeal to soldiers, national guardsmen, and policemen: each of you is one of us. The peasants you kill are your own brothers and sisters. When you hear a man telling you to kill, remember God’s words, ‘thou shalt not kill’. No soldier is obliged to obey a law contrary to the law of God. In the name of God, in the name of our tormented people, I beseech you, I implore you; in the name of God I command you to stop the repression.” 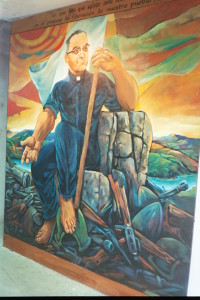 The three in the tree with the loudspeaker weren’t soldiers – two of them were priests. The recording they played was of Archbishop Romero’s final homily, delivered a day before his assassination, just three years previous, at the hands of paramilitary soldiers, two of whom had been trained at this school. Fr. Larry Rosebaugh, who was killed in Guatemala on May 18, 2009, Linda Ventimiglia, and Fr. Roy Bourgeois, a former missioner expelled from Bolivia who was later excommunicated from the Roman Catholic Church because of his support for women’s ordination, were sentenced to 15-18 months in prison for the stirring drama they created on the base that night. Romero’s words were heard loud and clear, and even after military police arrived at the base of the tree and stopped the broadcast, Roy Bourgeois, who would later found a movement to close the school, continued shouting Romero’s appeal as loudly as he could until he was shoved to the ground, stripped, and arrested.

As we approach the nightmare of renewed, expanded U.S. war in Iraq, I think of Archbishop Romero’s words and example. Romero aligned himself, steadily, with the most impoverished people in El Salvador, learning about their plight by listening to them every weekend in the program he hosted on Salvadoran radio. With ringing clarity, he spoke out on their behalf, and he jeopardized his life challenging the elites, the military and the paramilitaries in El Salvador. 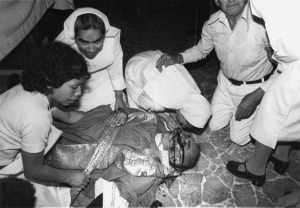 I believe we should try very hard to hear the grievances of people in Iraq and the region, including those who have joined the Islamic State, regarding U.S. policies and wars that have radically affected their lives and well-being over the past three decades.

It could be that many of the Iraqis who are fighting with Islamic State forces lived through Saddam Hussein’s oppression when he received enthusiastic support from the U.S. during the Iran-Iraq war in the 1980s. Many may be survivors of the U.S. Desert Storm bombing in 1991, which destroyed every electrical facility across Iraq. When the U.S. insisted on imposing crushing and murderous economic sanctions on Iraq for the next 13 years, these sanctions directly contributed to the deaths of a half million children under age five. The children who died should have been teenagers now; are some of the Islamic State fighters the brothers or cousins of the children who were punished to death by economic sanctions? Presumably many of these fighters lived through the U.S.-led 2003 Shock and Awe invasion and bombing of Iraq and the chaos the U.S. chose to create afterwards by using a war-shattered country as some sort of free market experiment; they’ve endured the repressive corruption of the regime the U.S. helped install in Saddam’s place. 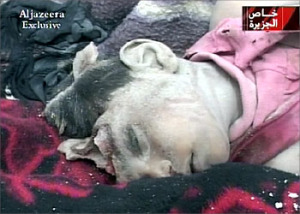 The United Nations should take over the response to the Islamic State, and people should continue to pressure the U.S. and its allies to leave the response not merely to the U.N. but to its most democratic constituent body, the General Assembly.

But facing the bloody mess that has developed in Iraq and Syria, I think Archbishop Romero’s exhortation to the Salvadoran soldiers pertains directly to U.S. people. Suppose these words were slightly rewritten: I want to make a special appeal to the people of the United States. Each of you is one of us. The peoples you kill are your own brothers and sisters. When you hear a person telling you to kill, remember God’s words, ‘thou shalt not kill’. No soldier is obliged to obey a law contrary to the law of God. In the name of God, in the name of our tormented people, I beseech you, I implore you … I command you to stop the repression.

We in the U.S. must give up our notions of exceptionalism; recognize the economic and societal misery our country caused in Iraq; recognize that we are a perpetually war-crazed nation; seek to make reparations; and find dramatic, clear ways to insist that Romero’s words be heard: Stop the killing.