The Challenge of the Islamic State and U.S. Policy

By Karl Meyer and Kathy Kelly 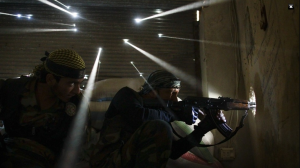 What to do about the political mess in the Middle East and the rise of the Islamic State and related political movements?

Shortly after the end of World War II, the Western powers and the whole world began to recognize that the age of explicit colonial domination was over, and dozens of colonies were let go of and took political independence. It is now past time for the United States and other world powers to recognize that the age of neo-colonial military, political and economic domination, especially in the Islamic Middle East, is decisively coming to a close.

Attempts to maintain it by military force have been disastrous for ordinary people trying to survive in the affected countries. There are powerful cultural currents and political forces in motion in the Middle East that simply will not tolerate military and political domination. There are thousands of people prepared to die rather than accept it.

U.S. policy will find no military fix for this reality.

Stopping Communism by military imposition of subservient government did not work in Vietnam, even with the presence of a half million U.S. troops at one period, the sacrifice of millions of Vietnamese lives, the direct death of about 58,000 U.S. soldiers, and hundreds of thousands of U.S. physical and mental casualties, still ongoing today.

Creating a stable, democratic, friendly government in Iraq has not worked even with the presence of at least a hundred thousand U.S. paid personnel at one period, the cost of hundreds of thousands of Iraqi casualties and deaths, the loss of about 4,400 U.S. troops to direct death, and many more thousands to physical and mental casualties, ongoing today and for many more years to come. The U.S. military attack and occupation has led to fratricidal civil war, economic disaster and misery for millions of ordinary Iraqis trying to survive.

The results in Afghanistan are proving very similar: dysfunctional government, massive corruption, civil war, economic disruption, and misery for millions of ordinary people, at a cost of thousands of deaths, and uncounted thousands of Afghan, U.S., European, and allied casualties, that will continue to manifest symptoms for decades to come.

The U.S./European military intervention in the Libyan revolt left Libya in an unresolved condition of dysfunctional government and civil war. 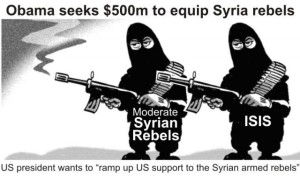 ISIS vs. the US-UK-trained and armed FSA.

The Western response to the rebellion in Syria, encouraging and fostering civil war, at the cost of death or misery for millions of Syrian refugees, has only made the situation worse for most Syrians.

We need to think, above all else, about the terrible costs of each of these military interventions for ordinary people trying to live, raise families and survive in each of these countries. These awful failures of U.S. and European military intervention have led to immense cultural resentment among millions of serious and thoughtful people in Islamic countries of the Middle East.

The evolution and emergence of the Islamic State and other militant movements is one challenging response to these realities of economic and political chaos.

Now the United States is engaging in another military intervention, bombing targets in areas of Islamic State control, and trying to persuade surrounding Arab states and Turkey to enter the fray by putting their troops at risk on the ground. The expectation that this will work out better than the interventions cited above seems to us another huge mistake, one that will be equally disastrous for ordinary people caught in the middle.

It is time for the U.S. and Europe to recognize that civil wars in the Middle East will be resolved by the emergence of the most powerful and best organized local movements, in spite of what the U.S. Government agencies, on the one hand, or worldwide humanitarian communities, on the other hand, might prefer. They may also lead to the rearrangement of national boundaries in the Middle East that were arbitrarily set by European colonial powers a hundred years ago at the end of World War I. This has already occurred with Yugoslavia, Czechoslovakia, and other eastern European countries.

What U.S. Policies Might Foster Political Stability and Economic Recovery in Areas of Conflict?

1) The U.S. should end its current provocative drive toward military alliances and missile deployments encircling the boundaries of Russia and China. The U.S. should accept pluralism of economic and political power in the contemporary world. Present policies are provoking a return to Cold War with Russia, and a tendency to begin a Cold War with China. This is a lose/lose proposition for all countries involved.

2) By turning toward a reset of policy toward cooperating with Russia, China and other influential countries within the framework of the United Nations, the United States could foster international mediation and political pressure from a broad consensus of countries to resolve the civil wars in Syria and other countries by negotiation, devolution of power, and other political solutions. It might also reset its relationship toward friendly cooperation with Iran in the Middle East and resolve the threat of nuclear weapons proliferation in Iran, North Korea and any other potential nuclear weapons states. There is no essentially inherent reason why the U.S. needs to continue a hostile relationship with Iran.

3) The U.S. should offer reparations to ordinary people harmed by U.S. military interventions, and generous medical and economic aid and technical expertise wherever it may be helpful in other countries, and thus build a reservoir of international goodwill and positive influence. 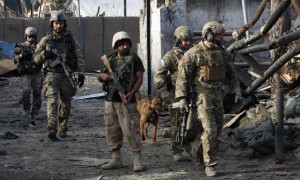 Karl Meyer founded Nashville Greenlands, a sustainable living project in Nashville, TN.  As a radical pacifist, he has resisted nuclear weapons and refused to pay all forms of federal income tax for six decades. During the Vietnam war, he was deported from Vietnam for marching on the U.S. Embassy in Saigon.  He campaigned to end urban poverty by running a house of hospitality for thirteen years, in Chicago.  And, he’s done time in federal and state prisons for nonviolent direct actions. Karl Meyer, Nashville Greenlands, 2407 Heiman St., Nashville TN 37208 615-322-9523.