The Charlie Hebdo-MI6 Connection: We Warned You False-flag Terror Was Coming 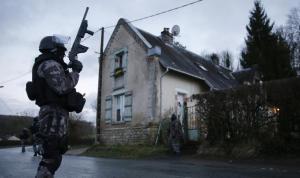 On the 8th and 10th of October 2014, the Plymouth Institute for Peace Research and Axis of Logic issued respective public warnings that the British secret services were planning terrorist attacks to be blamed on designated enemies, particularly ISIS. These are known as false-flag operations and their purpose is to motivate public support for foreign wars.1

Tragically, the warnings were not heeded and the Charlie Hebdo murders occurred a few months later. The chief suspects are Cherif and Said Kouachi. A third man, Amedy Coulibaly, is suspected of committing a second attack at a supermarket in Paris. Coulibaly and the Kouachis were close associates of British intelligence assets. This article will connect the dots.

The story begins with Abu Qatada, described as Osama bin Laden’s ‘right-hand man’ in the UK. Qatada had close connections with the Armed Islamic Group of Algeria (GIA), serving as a recruiter and editor of the organization’s newsletter.2

Baroness Scotland of Asthal, then-Minister of State at the British Home Office, said: ‘the Security Service had three meetings with Abu Qatada during 1996 and 1997’. In 2002, Time Magazine stated: ‘senior European intelligence officials tell TIME that Abu Qatada is tucked away in a safe house in the north of England, where he and his family are being lodged, fed and clothed by British intelligence services’.3 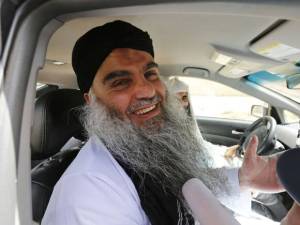 Abu Qatada with a long beard.

One of al-Qaeda’s most dangerous figures [Qatada] has been revealed as a double agent working for MI5, raising criticism from European governments, which repeatedly called for his arrest … He pledged to MI5 that he would not “bite the hand that fed him” … Indignant French officials accused MI5 of helping the cleric to abscond. While he remained on the run, one intelligence chief in Paris was quoted as saying: “British intelligence is saying they have no idea where he is, but we know where he is and, if we know, I’m quite sure they do.” Almost a year later Abu Qatada was found hiding in a flat not far from Scotland Yard.4

From the mid-1990s to 2000, Reda Hassaine, an MI5 double-agent (who was also working for the French and Algerian secret services),5 monitored Qatada and his colleague Abu Hamza at the Four Feathers Youth and Community Centre and the Finsbury Park Mosque, London. Hassaine told the Mail on Sunday:

At the Fourth Feathers Club, I saw Qatada brainwash young Muslims, living in Britain from Africa, Somalia, Sudan, Morocco and my own country of Algeria, by urging them to kill Christians and Jews. Qatada preached that if a Muslim became a suicide bomber, he would go to paradise and be able to make love to virgins.6

Shortly before his death, Britain’s former Foreign Secretary Robin Cook wrote: ‘Al-Qaida, literally ‘‘the database’’, was originally the computer file of the thousands of mujahideen who were recruited and trained with help from the CIA to defeat the Russians’7—and, he might have added, the British MI6 and SAS, as John K. Cooley and others document in extensive detail.8 Former SAS trainer Ken Connor, for instance, says ‘that he helped train Mujahedin fighters at two secret camps in Scotland and another in northern England during the 1980s’.9

In 1990, one Abu Hamza worked as an engineer at the Royal Military Academy Sandhurst. According to authors Sean O’Neill and Daniel McGrory, Hamza was ‘volunteering to help wounded mujahideen receiving treatment in London’. In 1995, he visited Bosnia three times.10 Former Chatham House Fellow Mark Curtis writes:

According to Bosnian Muslim military intelligence sources, Britain [and the US were some of] the main channels through which foreign jihadists entered Bosnia, while London hosted several financiers and recruiters for the cause … Britain … actively encouraged foreign jihadists to go to Bosnia.11 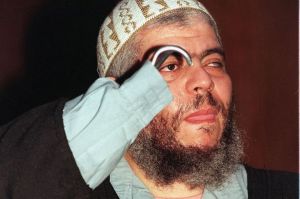 Abu Hamza, circling his right eye, for those in the know; a long beard.

In the 1990s, the governments of Egypt and Yemen sought Hamza’s extradition, but he was protected by the British government.12 Between 1997 and 2000, MI5 met with Hamza seven times. O’Neill and McGrory write:

Special Branch, the intelligence-gathering arm of Scotland Yard, had been talking to Abu Hamza since early 1997, when he was still preaching in Luton. In the classified records of the meetings he is referred to by the codename ‘damson berry’. Unknown to the police, MI5 had also begun meeting Abu Hamza at the behest of French intelligence; he was given the MI5 code number 910.13

According to The Observer:

Evidence collected by the American [intelligence] agencies shows that, as early as 1997, Hamza was organising terror camps in the Brecon Beacons, at an old monastery in Tunbridge Wells, Kent, and in Scotland, suggesting that he ran a far more extensive training network than has been officially acknowledged until now … British ex-soldiers, some of whom fought in Bosnia, were recruited to train about 10 of Hamza’s followers at the Brecon Beacons camp for three weeks in 1998. The former troops taught them to strip and clean weapons and gave them endurance training and lessons in surveillance techniques.14

So far, we have established Qatada and Hamza as UK intelligence assets and recruiters and trainers for ‘al-Qaeda’.

In 1992, one Rachid Ramda arrived in the UK from Algeria, ‘after police there linked him to terrorist attacks’, writes Mark Curtis. In 1994, French intelligence alerted MI5, who chose not to act. In 1995, writes Curtis, ‘it is alleged that Ramda led a gang which exploded a bomb packed with nails and bolts on the Paris underground’. The French sought Ramda’s extradition, but Ramda was protected by the British until 2006. ‘Can you imagine how the British would react if France caught the alleged moneyman behind the July 7 bombings, and then ten years later he was still fighting extradition?’, asked a French intelligence officer.15

The Metro bombing was connected to Qatada’s GIA group and to one Smain Ait Ali Belkacem, who was jailed for life in 2002. Keep this in mind, because the Charlie Hebdo suspects are connected. 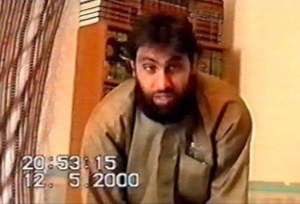 O’Neill and McGrory describe the Algerian-born Djamel Beghal as a ‘Finsbury Park recruiter’.16 Beghal moved to London with his French-born wife in 1997, before moving to Jalalabad in 2000. He was arrested in Dubai in July, 2001, and sentenced to ten years’ imprisonment in France for planning to bomb the US embassy in Paris.17 Beghal’s wife, Sylvie, has been allowed to live in Leicester, UK, with her children all this time.18

The Daily Mail writes that MI5 double-agent and Franco-Algerian spy, Reda Hassaine, ‘described Beghal as a ‘constant presence’ at Finsbury Park Mosque in the late 1990s. He said he was particularly close to extremist preacher Abu Qatada, but also mixed in the same circles as Abu Hamza’.19 The Telegraph quotes Hassaine as saying that Beghal ‘was closer to Abu Qatada than to Abu Hamza … He definitely had connections with them. I believe he lived outside London at the time but he was regularly seen at the mosque and at the coffee shops around Finsbury Park’.20

Ergo, there is little doubt that Beghal was connected to, even a disciple of, the British agents Qatada and Hamza.

Between 2004 and 2006, the so-called Buttes-Chaumont group recruited fighters for Iraq to battle the Anglo-American invaders. One of the gang was an orphan of Algerian parents and a former pizza-deliverer, Cherif Kouachi. In 2005, Kouachi was detained by the French police when he attempted to travel to Iraq’s neighbour Syria. Le Monde writes: ‘During the year and a half he spent in prison, from January 2005 to October 2006, … Cherif Kouachi met who would become his mentor: Djamel Beghal’.21 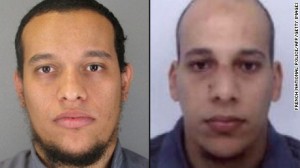 Said Kouachi (small, shaven beard) and Cherif Kouachi (no beard). What kind of Salafi/Wahhabi extremists were they?

Kouachi appears to have been either a pawn of or an asset to French intelligence. We have already seen his weak sentencing over the Iraq recruitment. The BBC writes: ‘In 2008, Cherif Kouachi was jailed [for a second time] for three years for his role in sending militants to Iraq, but 18 months of the sentence was suspended’.22 Kouachi denied the charges, which is unusual for an ‘al-Qaeda’ Islamist.23 (Even more unusual is the fact that no pictures show Kouachi, or any of the suspects, wearing a long beard, which is required for the Salafi/Wahhabi ‘al-Qaeda’ ideologues).

According to The Guardian:

[Beghal] was released in 2009 but put under house arrest in the village of Murat, in the Auvergne, where he appears to have been visited by several aspiring jihadis including Kouachi and Coulibaly. They were all arrested in May 2010, accused of attempting to free Smaïn Aït Ali Belkacem, a convicted terrorist jailed for a 1995 bombing of the Paris metro[,]24

of whom we spoke earlier. 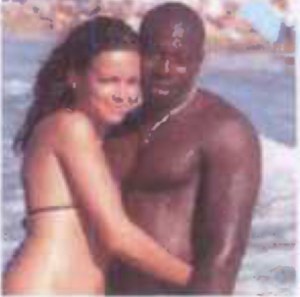 Little is known to the public about the suspects from the period 2010 to the shootings and hostage-takings of January, 2015, except that they were being monitored by the French police and secret services.25 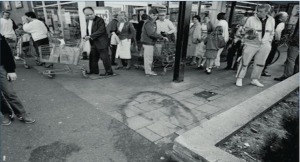 In NATO’s Secret Armies, Dr. Daniele Ganser documents the history of the CIA-MI6, Europe-wide covert terror operation, generically called Gladio. The operation ran in most if not all European countries from 1945 to 1992. In several instances, terrorists, including masked gunmen, who would open fire on the public, turned out to be proxies of the State-secret services. Ganser writes that in November 1985 (to give a single example),

people hurried to the Delhaize supermarket to make their last minute [Christmas] purchases [for the Belgian celebration of Santa Claus]. What happened thereafter was reconstructed from the testimony of witnesses. A Volkswagen GTI was parked outside the supermarket and three armed men with hoods over their heads came out of the car. The tallest of the three produced a pump-action shotgun, opened fire at point blank range and finished off in cold blood two shoppers instantly … In the ensuing massacre eight people, including a whole family, died, and seven more were injured …

‘Have certain relationships existed between this [Gladio] network and the acts of terrorism and large scale banditry, as carried out in Belgium during the last ten years?’, the Belgian parliament had ordered its select committee on Gladio to find out.26

The American Civil Liberties Union calls former FBI translator Sibel Edmonds ‘the most gagged person in American history’. Describing Gladio B, which, she claims, has been run since 1997, Edmonds says:

In the late 1990s, all the way up to 9/11, [Bin Laden’s second-in-command Ayman] al-Zawahiri and other mujahideen operatives were meeting regularly with senior U.S. officials in the U.S. embassy in Baku to plan the Pentagon’s Balkan operations with the mujahideen. We had support for these operations from Pakistan and Saudi Arabia, but the U.S. oversaw and directed them. They were being run from a secret section of the Pentagon with its own office.27

In a previous article (see note 1), PIPR quoted publicly-available British military documents inferring that attacks would be made and blamed on enemies.

despite being shot in the head by an AK47 at point-blank range, he avoided the loss of any blood;

and despite being shot in the centre-back of the head, his head was pushed to the left.

5. Sue Reid, ‘Reda Hassaine: The brave agent who exposed Hamza only to be betrayed by MI5’, Mail on Sunday, 11 April, 2012, http://www.dailymail.co.uk/debate/article-2127942/Reda-Hassaine-The-brave-agent-exposed-Abu-Hamza-betrayed-MI5.html

27. Quoted in Dr. Nafeez Mossadeq Ahmed, ‘Why was a Sunday Times report on US government ties to al-Qaeda chief spiked?’, Ceasefire Magazine, 17 May, 2013, http://ceasefiremagazine.co.uk/whistleblower-al-qaeda-chief-u-s-asset/