To Find a Happy Day: Cathy Breen on Refugee Crises 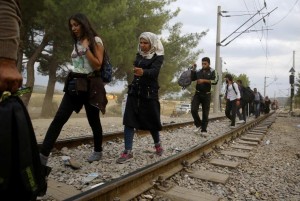 Iraqi and Syrian refugees in Greece.

When I can’t sleep at night I have the bad habit of listening to world news on the radio. This seems to be a family trait that I inherited from my father. The wave of refugees trying to find safety in European countries continues unabated. The numbers are staggering. As someone from the U.S., I am shamed by our lack of response and indifference, as well as our inability to acknowledge our responsibility in unleashing the chaos and violence in the Middle East through our war making.

My thoughts go to the recent perilous journey of a close Iraqi friend (I will call him Mohammed) and his son (whom I will call Omar). Already the survivor of an assassination attempt, this trusted translator, driver, guide and confidant received a death threat on his gate in early August. He fled under cover of the night, taking Omar with him. On that same day, 15 men were kidnapped in his village. He left a wife and six other children. Having lived with this dear family, I too felt as if I were on the hazardous exhausting, 42-day journey with them.

From Baghdad they fled to Kurdistan. From Kurdistan they went to Turkey. Next, they boarded a boat from Turkey to a Greek island, just miles from the Turkish shore. From there they went to another Greek island, and finally to a third island. Much to their relief, they were at last able to get on a ferry to Athens.

As they pulled away from the third island heading to Athens on a ferry, Mohammed wrote: It is very difficult to describe my feelings at this moment. It is a moment I have been waiting for since such a long time, and it should make me happy. But once the ship started to go away in the Mediterranean sea far from the coast, my body became as heavy as the distance became long. Farther and farther from the dearest kids and wife, my body became heavy and tears came down. Everything has a cost in this life, and the cost of freedom is suffering. No gain without pain. One hour later I got control of myself to hide my feelings from Omar who has always kept silent since we have been far from home. He is moving his lips saying something, refusing to share his feelings.

And we need to be awake for this trip, always a quick response and sometime we have to run fast. Our attempt to cross the sea failed three times in Turkey. If the Turkish police know we are Iraqi citizens they will put us in jail and send us back to Iraq. Two times we escaped from the Turkish police, but the third time they captured us on Turkish beach. We were held for only six hours and released as Syrians. It seems the Turkish side wants refugees to flee from their land because of economic problem, so the lie that we are Syrians can save our lives. But Omar refuses to tell a lie, and I spent much effort to convince him. Fortunately the police didn’t ask him since he was very tired when we were captured.

I wish I could know what he is saying with his moving lips. As we stay on the deck of the ferry, I am afraid from an unexpected act from him, he might jump into the sea. So I ask the guard to let us sleep on downstairs deck. I know that my son is a good Muslim, even better than me, and never think on suicide, but he is still under 18 years and may act strangely. Now he is sleeping in warm and dry place.

From Athens they traveled to Macedonia. Then on to Serbia and then to Hungary. The messages that came were understandably brief: “Now we are on standby at the border…Hopefully we can avoid the Hungarian police.” In Hungary the border was indeed blocked by the Hungarian police and they were forced to hide in the forest. From Hungary they managed to cross to Austria. “In need your advice” Mohammed wrote me. “Which country shall I choose? Germany or Finland? The news comes from Germany that huge number of Syrian and Iraqi refugees are there and the procedures for reunion with family may be long.” I did not know what to advise him.

From Austria they went on to Germany.

If I register in Austria then we have to stay here. No other country will accept our case. ..Going to Germany no need for permission from Austrian government. They are happy if any refugee decides to get out from their land… Honestly I only have a little money left…As I write this, I got news that the German police have closed the border and stopped the train from carrying refugees. My idea is to stay at the border until the German authorities allow us to pass through their lands.

Mohammed and Omar made it into Germany and then to Sweden. “Now we are in Sweden…we found a warm place to sleep in a basketball hall. Tomorrow we will try to buy a ticket for the ferry, but everybody says this will be impossible as they will ask for passport. But we will try.” They crossed from the Turkish shore to a Greek island in an overcrowded boat. When the Turkish Sea police chased them, everyone was told to throw their bags overboard. Mohammed’s passport was in his bag.

Again and again throughout the journey he thanked me for our prayers, for imploring the guardian angels to protect them. Finally, miraculously, they crossed over to Finland. As of this writing, more than 500,000 people have crossed into Europe this year. Over 200,000 arrived in September alone, and a million or more are expected before the year’s end. Mohammed and Omar have been given housing at a children’s summer camp run by a Finnish Christian group. The nearest town is 12 kilometers away.

When we arrived here, Omar was expecting to see Finish people and find friends his age. But he found himself in an isolated little village with limited food and fear from angry anti-refugee protesters who might come and invade the camp and threaten his life again…The guard told us to keep the windows closed and keep silent even if the protesters come and break the windows. He remembered the day when the gunmen in Baghdad opened fire on my car. Omar has lost many of his friends and he saw many explosions in front of his eyes. His teacher was killed in front of him, and a few days later he lost his uncle, his grandmother and his two grandfathers. Some of his friends got kidnapped.   He has gotten use to life in Iraq, always keeping your sadness inside your heart. But this time his tears betray him as he tosses and turns silently on his bed at night.

And then came this heartwarming message:

Today is the first happy day for Omar. There is a lake nearby us and one of the staff felt sympathy for my son and was trying to help with his psychological sickness. He gave him a

fishing stick and he has started fishing. It is the first time in his life to fish, and everyone is saying he is a very lucky guy. A small fish is his favorite food. He didn’t eat fish since we left Baghdad. Yesterday he caught 8 little fish and today he got 14 little fish. This helped to solve the problem of dinner…Miriam (I will call his wife by this name) and kids are OK. Three people were kidnapped last week and Miriam says almost every day she can hear sound of machine guns.

“Today there was a party in our camp, and the head of the place was there. He is a priest, a very respectful character. By the way they gave us sheep meat. The most significant thing I noticed about the priest was that he stood in line with the people to get his food. Not only that, but at the end of the line behind all the refugees. What a big difference between our society and this society. We need to get back to our humble and modest ways….Miriam and the kids are OK and today they were a little happy because the sky became cloudy and they are eager for rain. They wait for rain and are ready to sing the famous Iraqi song for rain: ‘Heavy rain, heavy rain, Fly my hair, fly my hair.’ But my girls said that unfortunately the rain didn’t come, but somehow they can breathe the Autumn winds….in desert places like Iraq, people like the rains, especially the farmers.”

Mohammed’s nostalgia comes through in his letters. He calls Finland the “farthest country on the planet.” Far from beloved family and homeland, I worry how they will fare as the days in Finland become so short and cold. May we draw courage from Mohammed’s words and valiant journey, to embrace our own journey….where ever that might take us. Added note: Just after the joyful news of the party at the camp, I received this news from Mohammed: “It seems today that the situation is not normal because the police car came outside and are talking to the guards. For two hours now the guards are lighting up the forest trees, patrolling with their own civilian cars, thinking that anti-refugee guys are nearby…what we are afraid is that they will try to set fire to the camp as it happened in Germany. Omar is sleeping, but we will stay awake to rescue our families.”