UK Government Proposed Chemtrails/Geoengineering as Early as 1970–With U.N. Approval 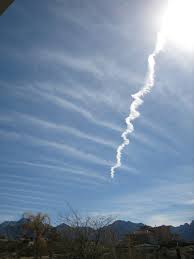 Parliamentary records confirm that the British government considered using cirrus clouds as a means of climate modification as early as 1970. In those days, climatologists thought that the climate was cooling and sought ways to warm it. Geoffrey Johnson Smith MP said:

‘to counteract the cooling effect of atmospheric dust the more jets there are in the atmosphere emitting heat-producing carbon dioxide the better, but some scientists, not all, hold the view that jet contrails—vapour trails as we usually call them—because they can lead to the extensive formation of cirrus clouds, could increase the cloud cover and thus effectively cut off the sun’s rays and reduce the earth’s temperature’.1

The military already had secret devices for creating contrails as early as the 1950s, as the National Archives at Kew reveal. One document is called ‘Artificial Contrail Generator’. It includes information on ‘Artificial vapour trails: contrail suppression equipment; vapour trails from Hunter aircraft at 50,000ft as seen from the ground, and from another aircraft flying at 8,000ft’.2

Think about it. Fake contrails could be made at altitudes as low as 8,000 ft. Disturbingly, the contrail generators were tested at the UK’s biochemical warfare laboratory, Porton Down, which sprayed chemicals on the British public intermittently from 1940 to 1979 in ‘trials’.3 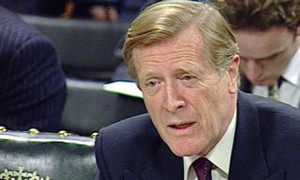 Normal, water-based contrails (with no chemical additives) can only form under certain conditions, in temperatures below -40oc, at altitudes above 24,000 ft. or more, and in relative humidity of 70 percent. As NASA studies dating back to the 1970s conclude, water-based persistent contrails—or manmade cirrus—only occurred in even more specific conditions: at higher altitudes and lower temperatures. The cirrus lasted for two-hours maximum.4

Take a look at the skies today. They are often covered in jet-produced cirrus all year round, in all temperatures and at all altitudes. The clouds last all day and occlude clear skies. That is because the Anglo-American governments are involved in a programme called ‘owning the weather’, which got Congressional funding in 1997.5 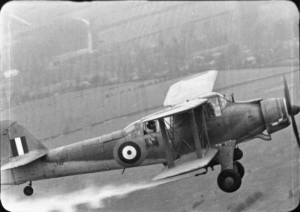 In 2010, the Minister of State for Energy and Climate Change, Joan Ruddock, admitted in a Parliamentary hearing that the UK government were financing sulphur-based ‘low level cloud development’.6

The vast majority of jets generating persistent trails are not commercial jets. They are specially-built with afterburners designed to raise the relative humidity of the atmosphere to make persistent trails easier to form. Nanoparticles are released in vaporised form for the water particles to adhere to.7

In the preceding years, the government received proposals from engineers and scientists. John Gorman, Chartered Engineer, wrote: ‘it would be nice to investigate the possibilities of injecting the fuel/additive mixture into an afterburner’, referring to submicron silica particles. Scientist John C.D. Nissen suggested three geoengineering proposals to the government, two of which are: ‘1) creating stratospheric clouds – using precursor injection to generate aerosols; 2) creating contrails – using an additive to aircraft fuel’.8 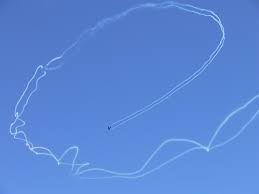 Perhaps the pilot is drunk?

Were their ideas rejected because the military are already doing it with the ‘owning the weather’ programme? A UK Ministry of Defence paper out to the year 2040 states: ‘Weather modification will continue to be explored’.9

Most frightening is the fact that governments have the United Nations (UN)’s approval to do these things, as long as they pretend it is not for warfare purposes. In 1962, over a decade before the UN attempted to ban weather warfare, General Assembly Resolution 1721 stated:

Noting with gratification the marked progress for meteorological science and technology opened up by the advances in outer space,

Convinced of the world-wide benefits to be derived from international co-operation in weather research and analysis,

1. Recommends to all Member States and to the World Meteorological Organization and other appropriate specialized agencies the early and comprehensive study, in the light of developments in outer space, of measures;

(a)    To advance the state of atmospheric science and technology so as to provide greater knowledge of basic physical forces affecting climate and the possibility of large-scale weather modification’.10