America’s renewed ‘defence’ deal with Japan is primarily aimed at containing China’s regional ambitions, thereby ensuring US freedom of action. Following decades of dedicated protest by Japanese civilians over the presence of US military bases in their country, thousands rally against moves by the Abe government to violate Japan’s ‘Peace Constitution’ and prepare to engage in overseas military operations.

In 1997, the US Space Command, followed by the Joint Chiefs of Staff in 2000, committed the US military to doctrine of global control, called ‘Full Spectrum Dominance’. Since then, military assaults in various guises have taken place against Serbia, Afghanistan, Iraq, Pakistan, Yemen, Somalia, Libya, Syria, and, most dangerously, Ukraine.1

Now the US is altering its Japan policy. In WWII, the US killed 3 million Japanese (mostly with incendiary bombing) and destroyed 70% of the country, before dropping two nuclear weapons (on Hiroshima and Nagasaki). The country was in no position to do anything but accept US demands, including accepting a ‘Peace Constitution’, which prohibits Japan from using its military abroad. As the 70th anniversary of the nuclear nightmare approaches, the US reverses policy. 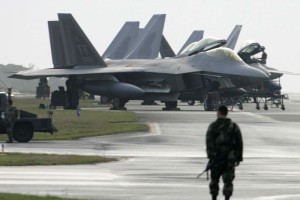 US Raptor bombers in Japan.

The move announced in July follows the Guidelines for US-Japan Defense Cooperation (GDC). The US-drafted GDC is enacted ‘to ensure Japan’s peace and security under any circumstances’, a phrase so broad as to infer that any Chinese defensive measure could be met with military force, giving the US and Japan carte blanche to operate in the region. It continues: the US will ‘extend deterrence to Japan through the full range of capabilities, including U.S. nuclear forces. The United States also will continue to forward deploy combat-ready forces in the Asia-Pacific region and maintain the ability to reinforce those forces rapidly’.2

Responding to the renewal of GDC, Chinese Foreign Ministry spokesman, Hong Lei, said: ‘The U.S.-Japan alliance is a bilateral arrangement forged during the Cold War period … [T]he Cold War is long-gone’. US actions are heating it up. The Chinese Ministry of Defence said: ‘[the] military alliance is an outdated product which goes against the trends of times featuring peace, development, cooperation and mutual benefit’.3

Since 2008, Russia and China have repeatedly introduced treaties to the United Nations in an effort to prohibit cyberwar and space weaponization. The treaties were rejected by the US. In keeping with the Full Spectrum Dominance doctrine, US spokeswoman Dana Perino explained: ‘The United States opposes the development of new legal regimes or other restrictions that seek to prohibit or limit access to or use of space’. A year later, the US rejected a Russian-Chinese proposal to ban cyberwarfare. The New York Times put it simply: ‘The United States argues that a treaty is unnecessary’.4

As China proposed peace treaties, the US expanded. A paper of the US Center for Strategic and International Studies notes that the 2012 US-Asia Pivot strategy ‘has prompted Chinese anxiety about U.S. containment and heightened regional worries about intensified U.S.-China strategic competition’. The paper followed a US intelligence report to Congress which confirms that China—which spends one-tenth as much on its military as the US—is not an international threat.5 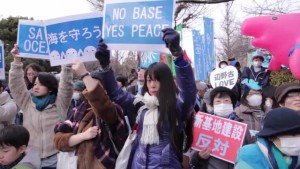 Japanese protestors: “No Base, Yes Peace.”

In 2015, the US Defense Department—in sharp contrast to media reporting—confirmed China’s interest in normalizing relations with the US: ‘China seeks to ensure basic stability along its periphery and avoid direct confrontation with the United States in order to focus on domestic development and smooth China’s rise’. It notes that ‘Limited logistical support remains a key obstacle preventing the PLA [People’s Liberation Army of China’s] Navy from operating more extensively beyond East Asia, particularly in the Indian Ocean’.

The report concludes that ‘China remains far behind the United States … [in] resisting electronic attack and the capacity to respond to multiple warheads. Finally, if China is to deploy an effective BMD [Ballistic Missile Defence] system, it will need to be supported by a space-based early warning system, currently missing from China’s BMD infrastructure’.6 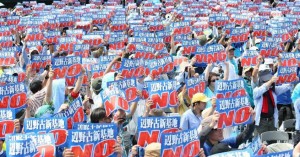 According to the GDC noted above, massive surveillance—including BMD—is part of the US-Japan deal.

The people of Japan have responded to growing US-Japanese collaboration by increasing their protests against US militarism.

According to the BBC (with its usual spin), ‘Several recent polls showed that more than half of Japanese voters were opposed to passing the bills’. Expressing his contempt for the public, Prime Minister Abe said: ‘Unfortunately, the Japanese people still don’t have a substantial understanding … I will work harder so public understanding would deepen’.7 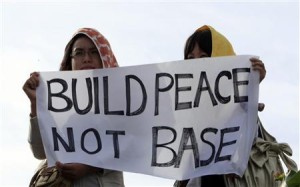 “Build peace, not base.”

100,000 demonstrators protested outside the Assembly to oppose the Lower House’s passing of the bill. ‘The protest was reminiscent of those that toppled prime minister Shinzo Abe’s grandfather from the premiership 55 years ago after he rammed a revised US-Japan security pact through parliament’, says Reuters. ‘Many’ of the current protestors ‘stayed well into the night, chanting and holding up placards reading “Abe, quit”, “No War, No Killing” and “Scrap the War Bills”’.8

Japanese peace activists, who have engaged in dedicated protests against US military bases for decades, must maintain their important efforts. Without the countless actions of ordinary people, Full Spectrum Dominance will succeed.