Kabul–Outside the windows of the room where I sleep, here in Kabul, the Afghan Peace Volunteer (APV) women’s community maintains a small walled garden filled with roses. The community planted tomatoes, cilantro and greens. An apricot tree grows in one corner, a mulberry tree in another. The prayer call, chanted from a nearby mosque, awakens me just before dawn. Light appears in the sky around four, and soon after, the doves and neighborhood children begin to stir. Normal activities and routines persist here in Afghanistan, despite the decades of war and impoverishment. Military helicopters roar through the skies as sounds generated by ordinary workaday tasks fill the air: the whine of a machine cutting sheet metal mixes with a jingle played by an ice cream cart rolling down the street.

Zarguna, Khamed, and Zahidi host Voice for Creative Non-Violence coordinator Kathy Kelly and me in this house of peace. Because of intensified security concerns, we step outside only occasionally, generally once a day to visit the APVs Borderfree Center. During my last visit here in 2013, we were much more relaxed about walking through the neighborhood for errands.

The youth, now studying in secondary schools and universities, run several thriving projects and teach at the Borderfree Center for street children. 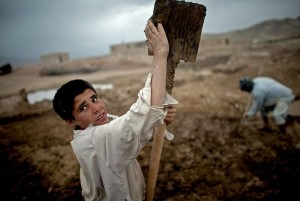 The circumstances are dire for these children. Of the estimated six million child laborers in Afghanistan, 60,000 work in Kabul, competing for meager wages. They sell bread and shine shoes on the streets to support their families so that they may eat. The June 2015 CIA World Fact Book reports that it is impossible to estimate the numbers of children out of school, however, in Afghanistan’s teen and adult population, the literacy rate is 38.2%. Among females over age 14, only 24.2% can read and write. How can the street children achieve a better life if they remain illiterate?

On the second day of our arrival, we spent time observing the classrooms at the APV School. The children could not stop smiling. Young teachers, who warmly welcomed their students (and us), enjoyed orderly classrooms filled with students who were eager to learn. They sat on the floor, facing a whiteboard, and listened carefully to their teacher. She gently encouraged individual students while calmly managing the lesson plan.

The school’s atmosphere, cultivated over the past nine months, has a magical effect on the 80 attending students. In a surprisingly short time, the commitment to creating a nonviolent learning environment has enabled at least thirty students to become literate.

The students attend school here one half day a week, on Friday, their holiday from government schools. When not in school they work on the streets to earn income for their destitute families. To compensate for time the child laborers now spend in school, the APVs supply the children’s families with a monthly donation of rice and oil. 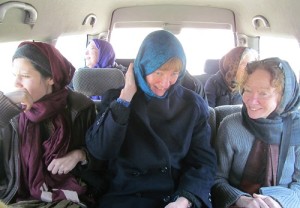 The APVs and their students face numerous challenges to their future security and survival. Yet bleak conditions don’t deter their resolve to move forward. I myself felt quite hopeful, especially while sitting in on a class about nonviolence.

Ali, whom I have known since 2011, gave an inspirational presentation regarding prevalent forms of violence in our world. The discussion that followed revealed the children’s spontaneous understanding that violence, whether local or global, directly threatens their lives. Ali’s class suggested that by working together and learning to cooperate with one another, they would create a better future for themselves and their families.

Afghanistan’s future could be determined by exploitative corporations eager to profit from trillions of dollars’ worth of resources estimated to lie under its ground. Geopolitical rivalries afflict the country as wealthy transnational elites compete for access to abundant resources. China intends to create high-speed rail from Beijing to Moscow, and has already built significant portions of the “New Silk Routes” which will enable China to access and move materials and products. The rush to continually increase corporate profits lays the groundwork for an intensified cold war between the U.S. and China. What’s more, several recently concluded trade agreements in the region excluded the U.S.

Speaking at Arizona State University’s McCain Institute, Secretary of Defense Ashton Carter complained that the U.S. wouldn’t be sidelined. “We already see countries in the region trying to carve up these markets… We must all decide if we are going to let that happen…if we’re going to help boost our exports and our economy…and cement our influence and leadership in the fastest growing region in the world; or if, instead, we’re going to take ourselves out of the game.”

Robert Berke, an energy financial analyst, recently reported that China and the U.S. have opened a hotline to avoid accidental nuclear launches. This particular threat undermines the desperate need for nuclear abolition.

Meanwhile dust and rubble fill Kabul’s streets. For most residents, the struggle to obtain work and food steadily increases. The Afghan government faces a severe lack of funding and fails to meet basic human needs for clean water and solid waste management. Security has deteriorated as violence spreads unchecked in most provinces.

Despite uncertainties over the future, The APV community pursues small but significant efforts at the Borderfree Center. They give a fine example of how a community can cooperate toward reaching shared goals, rather than compete. Roses keep blooming in Kabul amid the chaos and dust, and a tiny light of joyful collaboration remains graciously alive.

Martha Hennessy is in Kabul representing Voices for Creative Nonviolence. She can be reached at marthahennessy@gmail.com.