What Does War Generate? 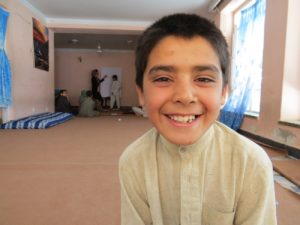 At an April, 2017 Symposium on Peace in Nashville, TN, Martha Hennessy spoke about central tenets of Maryhouse, a home of hospitality in New York City, where Martha often lives and works. Every day, the community there tries to abide by the counsels of Dorothy Day, Martha’s grandmother, who co-founded houses of hospitality and a vibrant movement in the 1930s. During her talk, she held up a postcard-sized copy of one of the movement’s defining images, Rita Corbin’s celebrated woodcut listing “The Works of Mercy” and “The Works of War.”

She read to us. “The Works of Mercy:  Feed the hungry; Give drink to the thirsty; Clothe the naked; Visit the imprisoned; Care for the sick; Bury the dead.” And then she read: “The Works of War: Destroy crops and land; Seize food supplies; Destroy homes; Scatter families; Contaminate water; Imprison dissenters; Inflict wounds, burns; Kill the living.”

The following week, General James Mattis was asked to estimate the death toll from the U.S. first use in Nangarhar province, Afghanistan, of the MOAB, or Massive Ordinance Air Burst bomb, the largest non-nuclear weapon in U.S. arsenals.

“We stay away from BDA, (bomb damage assessment), in terms of the number of enemy killed,” he told reporters traveling with him in Israel. “It is continuing our same philosophy that we don’t get into that, plus, frankly, digging into tunnels to count dead bodies is probably not a good use of our troops’ time.”

His comment seemed to echo another General, Colin Powell, who, when asked how many Iraqi soldiers might have been killed by U.S. troops invading Iraq in 1991, commented, “That’s not really a number I’m terribly interested in.” Other generals noted that some of those Iraqi troops, conscripts trying to surrender, were literally buried alive in their trenches by plow attachments affixed to U.S. tanks. More recently, Lieutenant General Aundre F. Piggee acknowledged that during the 2007 U.S. military surge in Iraq, when civilian casualties rose by 70%, the U.S. military wasn’t  “necessarily concerned” about limiting civilian deaths.

What are the generals’ concerns and interests in Iraq and Afghanistan? How strong is their concern even for the well-being of their own troops? Several veterans of U.S. wars in Afghanistan and Iraq have written persuasive memoirs about the wastefulness of their deployments, accusing commanders of sending them on futile missions.

Major Daniel Sjursen, writing for Tom Dispatch, describes the ostensible reasons for the entire U.S. war in Afghanistan as fantasies. He argues that U.S. generals gained promotions and notoriety for strategic proposals designed to win what they knew was an unwinnable war. He describes the squandering of soldiers’ lives to secure villages which had been largely abandoned, and the pointlessness of paying high-tech military contractors billions for weapons useless against homemade enemy bombs:

That’s right, the local “Taliban” — a term so nebulous it’s basically lost all meaning – had managed to drastically alter U.S. Army tactics with crude, homemade explosives stored in plastic jugs. And believe me, this was a huge problem. Cheap, ubiquitous, and easy to bury, those anti-personnel Improvised Explosive Devices, or IEDs, soon littered the “roads,” footpaths, and farmland surrounding our isolated outpost. To a greater extent than a number of commanders willingly admitted, the enemy had managed to nullify our many technological advantages for a few pennies on the dollar (or maybe, since we’re talking about the Pentagon, it was pennies on the millions of dollars).

In a spate of recent articles, Sjursen and other veterans of U.S. war in Afghanistan have shredded each of the various rationales U.S. generals and pro-war think tanks have given to defend the wreckage and ruin the U.S. has caused during sixteen years of “generational war” in Afghanistan, throughout which U.S. people have been told that the war protects Afghans from the Taliban.

War profiteers and self-marketing politicians have no interest in helping U.S. people understand that war itself is a tyrant, that the sound of nearby gunfire or a drone attack is as much of an order to flee one’s home as any command from a Taliban warlord. Children displaced by war, living in the relative safety of Kabul’s refugee camps find scant protection from hunger, disease, and the harshest winters, while mothers repeatedly tell us that if it weren’t for the children bringing scraps of food scavenged at the market place and working as child laborers in the streets, the families would starve. When will the U.S. end, when will it depose, this war that it has made into a ruler of Afghanistan?

Mubasir, age ten, lives in Kabul. He helps his family by polishing boots every day from 7:00 a.m. to 12 p.m. Then, as part of the APVs “Street Kids School” program, he goes to school during the second part of the day, assured that the APVs will compensate his mother for the income he otherwise might have earned. The APVs give her a monthly donation of rice, cooking oil and a small amount of beans.

In a recent videotaped conversation with Mubasir, Hakim, who mentors the APVs,  asks if he has any special problems at home. Mubasir responds: “We have many problems. My father is in prison. I cannot manage on my own. There’s not much at home.” Mubasir earns an average of 75 cents to $1.50 per day.

Do you sometimes have fruit at home?” Hakim asks. “No,” says Mubasir. “And meat?” “Never, we’re definitely not able to have meat.” Asked if he feels tired at the end of the day, after working in the mornings and schooling in the afternoons, Mubasir notes that he does his homework from 7:00 p.m. to 8:00 p.m. “Then I say my prayers and go to sleep.” Mubasir has never been helped by the U.S. or the Afghan government. But Afghans have learned to help each other. I’ve watched the APV community care, profoundly and practically, about feeding the hungry, bringing drink to the thirsty, and visiting people nearly imprisoned in refugee camps. Every year, they provide warmth for families at risk of freezing to death during harsh Afghan winters.

It seems simplistic, at first, to contrast the works of peace and the works of war. U.S. politicians endlessly promise us humanitarian wars meant to create stable, democratic regimes wherever our bombs level buildings, reservoirs and electricity plants, dismembering whole economies and countless civilian bodies, creating endless reservoirs of panic and rage and grief from which democracy might grow. Perhaps we forget people like Mubasir because after having heard these implausible platitudes, we forget our humane pretensions and settle down to rooting for our side against faceless enemies of the wrong race and religion.

Humane aid is desperately needed in Afghanistan, but it can only evaporate in corruption if people bearing weapons control it. Resources meant for impoverished people are predictably diverted toward the benefit of various factions fighting a war. Warring factions within Afghanistan, including the U.S. army, cannot do the works of mercy as they pursue the works of war. War has its own agenda and remains the worst of many dark outcomes for Afghanistan until the U.S. resolves to contribute nothing more to the region but the plentiful reparations it will owe once its pointless war is surrendered, and its troops have gone home.

My young Afghan friends live in a country which is maddened, bloodied, and broken. They know what war generates. Yet they still believe it’s in the interest of U.S. people, including the generals, to abolish war and live together without killing one another.

Kathy Kelly (kathy@vcnv.org) co-coordinates Voices for Creative Nonviolence (www.vcnv.org). When in Afghanistan, she is a guest of the Afghan Peace Volunteers (www.ourjourneytosmile.com)