Which Side Are We On?

“On the one side, powerful military bureaucracies, influential and richly financed weapons industries, their lobbies, their captive legislators, those for whom paranoia or past wars are a way of life,” he wrote. “On the other side, only reason, the will to survive, the inarticulate poor” –John Kenneth Galbraith, forward to the 1978 edition of Ruth Sivard’s World Military and Social Expenditures, quoted in the NYT obituary for Ruth Sivard

Kabul–Here at the Afghan Peace Volunteers’ Borderfree Center, between morning and afternoon Street Kids School sessions, I asked several of the volunteer teachers how they felt about organizing the school and teaching weekly language, math and nonviolence classes. “Now we have 100 students,” Zekerullah said. “I feel happy because I see how they change after spending time here.” When he first met some of the children, all of whom work on the streets as child laborers, ideas of washing up, dressing for school, bringing completed homework to classes, and being part of a community that cares deeply about them might have seemed remote or even unimaginable. Many who live in refugee camps get caught up in wild behavior, and hard work on the streets further toughens them. The children seem exuberantly happy during the Friday classes. They care for and respect each other. And their eyes light up when they see their teachers, all of whom are students in secondary schools or Universities in Kabul.

“Many of the children come from one room, mud homes inside refugee camps,” said Hamida. “They have no safe place to store their notebooks and school supplies. But still they try hard to prepare for classes.”

Each of the students is given a book which the teachers designed together. Included in the various language and math lessons are guides for being courteous, practicing good hygiene, and understanding basic health care. Zarghuna said that the book and the classes are making a positive difference in the children’s lives. Then she showed me a book she is reading, called I Am Malalai by the Nobel Laureate Malalai Yousafzai. Zarghuna has bookmarked a page in which Malalai notes that: “If the world would stop military spending for just 8 days, education could be provided for all the children of the world for 12 years!”

Ali and Zarghuna taught the nonviolence class today. First, the lesson focused on how people can share resources.  Ali showed a video of children from Kenya who became crippled because, lacking proper shoes, they were vulnerable to insect bites that led to foot diseases.  Three teenage girls in the U.S. decided to raise 30,000 USD to purchase shoes for the Kenyan children. The video helped the children understand that people suffer from poverty all over the world; they could also see young people wanting to help in practical ways. The children had already grown excited, two weeks ago, about a proposal to prepare and serve a meal, on September 21st, the International Day of Peace, to 100 day laborers working  on the streets of Kabul.

Many of the laborers, desperate for income, stand for hours, day after day, hoping to be chosen for even a few hours of work. The children understand desperation among families because they themselves work on the streets.  They polish shoes, wash cars, sell tissues, and devote long hours, even during the harshest weather, hoping to help feed their families. Before class ended, Ali and Zarghuna invited each student to volunteer for any one of ten teams that will prepare for the event on September 21st. 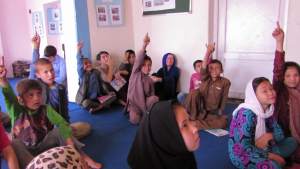 Each team now has a leader, selected from among the older children.  One team will identify 100 laborers and invite them to the meal. Other teams will price and purchase food, welcome guests, serve the food, and clean up after the event. Serving the meal will be part of #Enough!, a campaign to abolish war, which the Afghan Peace Volunteers will launch at their International Day of Peace celebration. 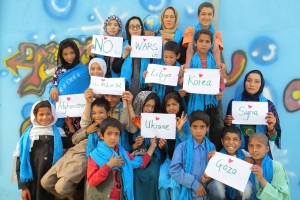 Afghan Street Children with volunteers at the Borderfree Center

Our young friends have had enough of war, displacement, trauma and hunger. 60 million people, worldwide, now seek refuge, many of them fleeing war and violence. Shameful warlords and war profiteers, such as those who commandeered U.S. wars against Iraq and Afghanistan, destabilize defenseless populations. The wars lead to massive refugee crises. Anyone called upon to support wars or warlords should learn the priorities embraced at the Borderfree Center — and switch sides.

This article first appeared on Telesur

Kathy Kelly (Kathy@vcnv.org) co-coordinates Voices for Creative Nonviolence (www.vcnv.org). While in Afghanistan, she is a guest of the Afghan Peace Volunteers (ourjourneytosmile.com)