Without Due Process: From Mass Incarceration to Assassination 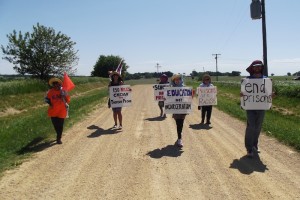 VCNV organised a 150 mile peace walk between 28th May to 10th June, from downtown Chicago to Thomson Prison, a new supermax federal facility due to open next summer with 1,900 solitary confinement cells.

Our walk started in downtown Chicago outside the Metropolitan Correctional Centre on Van Buren and State. By coincidence the full brunt of the Memorial Day Parades started to decamp along our street, a mass of young people congregated to rest, unknowingly, in the shade of an ominous urban concrete prison. Some 6,000 teenagers in military uniform, many brandishing model artillery, others marching in blocks and a lucky few in drum and brass bands. Looking across the sea of young and promising faces it was revealing to note that the majority of the teenagers were black or Latino. It was as if these kids were marching straight out of the parade and into the military or prison.

The walk traced a roughly westerly direction out of Chicago, across a semi-rural corn belt, through some obscure towns and into Thomson which has a population of 600.

When we walked the predominantly Black area of West Chicago people immediately understood the purpose of our walk and the placard messages such as “Education not Incarceration”, children cheered, some folks stopped us to say they agreed or to thank us. One of our key messages was that money spent on prisons should be allocated to community projects which stops the root causes of crime; instead of locking people up with lengthy sentences, cementing that individual within a sector of crime and poverty. A day later we were walking through White middle class suburbs with perfect lawns and picket fences, where mass incarceration is a far away danger for ‘other people’; segregation is stark, Westside Chicago may as well be another country.

In the town of De Kalb we met members of a Black congregation who told us their personal stories. One woman said her main worry in life was keeping her three Black grandsons out of prison. The eldest one had already been picked up twice for the ‘scent of marijuana’ in his car. He had been hauled into police custody and remanded on bail without a crumb of evidence. Raising the $1200 bail was a massive toll on family finances, as well as continued involvement with police.

95% of prisoners in the U.S. never receive a trial, the vast majority plead guilty in the hope of receiving a reduced sentence.

Some of the older members of the congregation reflected on how the situation for black people in the U.S. had actually worsened in the last few decades, a direct result of the 1994 Crime Bill, the ‘tough on crime’ policy started by Reagan and accelerated under Bill Clinton where incarceration rates jumped by 673,000 inmates within just two terms.

An older Black father in the congregation reflected that having a Black President was good for young Africa American aspirations, but in terms of noticeable improvements for Black civil rights, there haven’t been any noticeable gains.

It’s now commonly documented by academics and activists that the U.S. system of mass incarceration is the modern day form of slavery for Blacks and Latinos. Prisons are being likened to slave ships with cells densely stacked on top of one another: police officers like slave overseers, legally endorsed to operate freely within black communities, shooting and terrorising people without being held to account, without scrutiny.

58% of all prisoners in the US are Black or Latino, yet they make up only 1/4 of the national population.

Within privately owned penitentiaries inmates are put to work with jobs that range from making military equipment, blue jeans and baseball caps to fighting fires, clearing trees and harvesting corn, soybeans and cotton (sometimes on former slave plantation lands). Manual labour on average can earn a prisoner between 70 cents and $1.70 per day. Personal overheads for a prisoner include things like making phone calls. A prison phone contract is leased out to a private company which can charge up to 50 cents a minute, just a small part of the prison industrial complex which is now a multi billion dollar industry.

When you look at how the US treats its own citizens, it’s less surprising that it is now the central power which terrorises other nations with war and weaponised drones. Using the same demographics to incarcerate Blacks and Brown people, the U.S. military uses skin colour, clothing, age, gender and area to assassinate individuals with drones – without due process (evidence or trail), but with the vague justification of being an “imminent threat” to the security of the U.S. My thoughts turn to Tamir Rice, the innocent 12 year old boy in Cleveland, Ohio, shot dead within seconds of police arriving at the scene.

Solitary confinement consists of being locked in a cell 23 out of 24 hours, without human contact, without a TV. Inmates who are illiterate are deprived of the only available form of escapism – books. During the walk we were joined by Brian Nelson who had spent 23 years in solitary confinement. He said the only thing which kept him going was receiving books from his mother and becoming a ‘jailhouse lawyer’. Brian now works with a prisoner support organisation but struggles everyday with anxiety and depression. Public transport is impossible, as are crowded spaces and driving can bring on panic attacks. Prior to entering solitary confinement he had no mental health issues, within 9 months he was on medication to cope with depression.

Today he’s still trying to get an answer as to why he was actually placed in solitary. “I went from an open prison in New Mexico to being strapped to a stretcher and transported to a supermax. My lawyers can’t get an answer”. The desire to continue living is a struggle, he’s still on medication and needs to see a psychiatrist every week. Brian now prefers to spend time alone: “I first went into solitary when I was 14. They said it was for my own ‘protection’ as I was little. Now it’s like my social skills stopped developing at that age. Socially I’m still 14”.

Nobody knows how many people are currently in solitary confinement. With the massive scale of privately run prisons, the government is unable to keep a track on who’s actually in solitary and where. However it’s been estimated that upwards of 80 thousand are in some sort of segregated incarceration. The statement I repeatedly heard was, “You might not have mental health issues when you enter solitary, but by the time you get out you will”.

The closing of Guantanamo was one of Obama’s key election promises when he came to office. Two terms later and he’s still struggling to make good on the promise. At one point Thomson prison was considered a likely facility to transfer the remaining 91 detainees, many of them have been incarcerated and tortured for 14 years, without trial and without substantial evidence to justify their continued imprisonment. In total 779 people have been kept at Guantanamo, 23 of which were juveniles, detained indefinitely in a blackspot, immune from international laws, devoid of human rights.  It’s unlikely their state will improve if transferred to Thomson where they will almost definitely be classified as an “imminent threat to national security” and therefore deprived the rights of other U.S. prisoners. They would have to also cope with solitary confinement, one of the few things Guantanamo doesn’t impose as a long term condition.

During the walk we invited Senator Dick Durbin and President Obama to spend a week in solitary confinement, by way of a small qualification required before having the power to incarcerate other individuals. Our invitation went unanswered, though we did receive police surveillance and a massive presence (18 police cars) when our group of 15 walkers arrived in Thomson. Perhaps coincidentally there was also a police helicopter circling overhead, and Thomson locals had been informed that “a riot from Chicago was heading into town”.

The U.S. has now dispensed with due process, whether you be a Brown skinned person in the Middle East or in Afghanistan and Pakistan, targeted by a Predator drone; a young African American man shot on the streets by police; or part of the 95% of U.S. prisoners incarcerated without trial. This is reinforced by U.S. policy abroad, the CIA’s extraordinary rendition and detention program, symbolised internationally by notorious black site secret prisons and 14 years of  Guantanamo, this has left the global image of the U.S. extremely tarnished. At the time of writing, within just two days, there have been separate incidents where U.S. police shot dead 2 black US citizens, Philando Castile and Alton Sterling.

Never mind guilty before charged, the current status quo is assassination without evidence, charge or trial. Guilt is decided by the colour of your skin.