A Mile in Their Shoes: Kathy Kelly Discusses War and Peace in Afghanistan 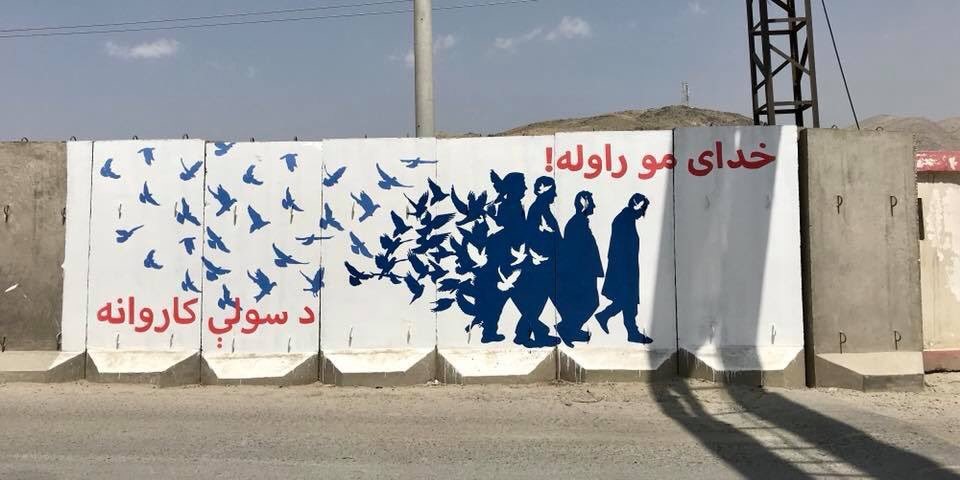 This past Friday in Afghanistan’s Ghazni province, Hazara girls joined young Pashto boys to sing Afghanistan’s national anthem as a welcome to Pashto men walking 400 miles from Helmand to Kabul. The walkers are calling on warring parties in Afghanistan to end the war. Most of the men making the journey are wearing sandals. At rest stops, they must tend to their torn and blistered feet. But their mission grows stronger as they walk. In Ghazni, hundreds of residents, along with religious leaders, showed remarkable readiness to embrace the courage and vision of the Helmand-to-Kabul peace walk participants. It seems likely that ordinary Afghans, no matter their tribal lineages, share a profound desire to end forty years of war. The 17-year U.S. war in Afghanistan exceeds the lifetimes of the youngsters in Ghazni who greeted the peace walkers.

On June 7th, Afghanistan’s president, Ashraf Ghani, declared a week-long halt to attacks against the Taliban. Spokespersons representing an undetermined number of Taliban affiliates accepted the ceasefire on June 9th, with the U.S. also agreeing to suspend attacks against Taliban fighters.  Can the declared cease-fire lead to negotiations and an end to the war? Given the desperate circumstances I saw during a visit to Kabul in early June, it seems clear that a lasting peace will require finding ways to employ people and enable them to provide food and water for their families.

Destitution has caused numerous Afghan people to enlist in military forces, pro-government or insurgent. It’s extremely difficult to earn a living wage in Afghanistan, but military and paramilitary units, answerable to various warlords, including the U.S., pay wages which many Afghan families can’t afford to dismiss. My young friends in Kabul assure me their family members who joined military groups don’t want to cause bloodshed and they don’t want to be killed. They simply don’t have other viable options.

Almost 54 percent of Afghan citizens live below the poverty line, according to Afghanistan’s Tolo News coverage of a recent joint survey undertaken by the Central Statistics Organization and an international NGO.

The Afghan Peace Volunteers (APV), who welcomed me as their guest last week, want to help build a more egalitarian economy that will provide basic human needs. This year, they’re forging ahead in establishing worker cooperatives. During my visit, they celebrated the opening of a shoe-making cooperative. They’ve also devised a one-year plan for seamstresses to form a tailoring cooperative and explored possibilities for a carpentry cooperative.  “Once up-and-running,” their blog explains, “these worker cooperatives will pledge part of their earnings to the long-term, self-reliant work of the Afghan Peace Volunteers.”

The APV find inspiration in the story of Badshah Khan, sometimes referred to as “the Muslim Gandhi.”

After meeting Gandhi in 1919, Badshah Khan educated and organized members of the Pashtun (or “Pathan”) tribe, in an area that is now a border between Pakistan and Afghanistan, steadily building a movement to rebel against British occupation.  The “khidmatgyars” – Servants of God – refused to cooperate with the British and instead practiced self-reliance. They created their own constructive projects and persisted even when British repression became increasingly brutal.

Describing the growth of the “Servants” movement, Michael Nagler writes: “After perpetrating terrible massacre in 1930 in Peshawar, the British saw the ranks of the Servants swell from several hundred to 80,000.” They continued rejecting armed struggle, choosing instead to experiment with Gandhi’s methods of nonviolent resistance. To the astonishment of onlookers, they were a key element in the eventual liberation from British rule.

Badshah Kahn’s preferred method of transportation was walking. He trod along paths linking mountain villages and small towns, relying upon goodwill and the truth of his cause, not on weaponry, for his defense.

A likeness of Badshah Khan decorates the entrance to the APV center in Kabul. Stenciled underneath is his fundamental belief: “My religion is truth, love and service to God and humankind.”

I worry that in my country, the U.S., the dominant religion has become militarism. Rather than extending a hand of friendship to people in other lands and, in the case of Afghanistan, paying reparations for the terrible suffering we’ve caused, the U.S. continues to seek security through dominance and military might. It’s a futile effort. The Helmand to Kabul peace walkers display a better means of securing peace: the path of fellowship with our neighbors on this planet, of living simply so that others might simply live, and of willingness to share, even partially, in the human hardship and precarity others face.

I hope those walking for peace, working for equality, and imploring a different way forward can be heard and celebrated not only in Afghanistan, but in every country and amongst every group that has ever caused bloodshed and ruin in Afghanistan.