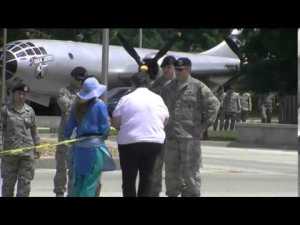 Kathy and Georgia at the base.

On October 7, thirteen years to the day from the beginning of “Operation Enduring Freedom,” Kathy Kelly of Voices for Creative Nonviolence and Georgia Walker, an activist in Kansas City, will be arraigned in US District Court in Jefferson City, Missouri. They have been summoned to answer charges that they trespassed at Whiteman Air Force Base during a protest against war crimes and assassinations carried out from that base using remotely controlled drone aircraft.

This is the same court that in 2012 sentenced me to six months in prison, Mark Kenney to four months and Ron Faust to five years’ probation. Judge Whitworth explained our convictions and the severity of these sentences telling us that he was responsible for the security of the B-2 “Spirit” stealth bomber, also based at Whiteman. Until after we were found guilty, the B-2 was never mentioned during our trial and the airmen of the Air Force police brought to witness against us testified that we had posed no danger to the security of the base or to the weapons housed there. As a US Magistrate, Judge Whitworth is sworn to rule by law regardless of his personal devotion to any particular weapons system, but this, he explained, was a deciding factor ruling against us.

From the Wikipedia entry for Whiteman Air Force Base: “Whiteman AFB is the only permanent base for the B-2 Spirit stealth bomber. Whiteman can launch combat sorties directly from Missouri to any part of the globe, engaging adversaries with nuclear or conventional weapon payloads. The 509th Bomb Wing first flew the B-2 in combat against Serbia in March 1999. Later, Whiteman B-2s led the way for America’s military response to the terrorist attacks on New York and Washington D.C. in September 2001. B-2 bombers were the first U.S. aircraft to enter Afghanistan airspace in October 2001, paving the way for other coalition aircraft to engage Taliban and Al Queda forces [sic]. During these operations, the aircraft flew round-trip from Missouri, logging combat missions in excess of 40 hours – the longest on record.”

The first bombs exploded over Kabul on October 7, 2001, so Kathy and Georgia have a significant date to be in court! The B-2 needs inflight refueling every six hours and it costs $55,000 an hour just to keep it in the air, not to mention the cost of munitions. The flyers who took the first bombs to Afghanistan were in the air for more than 40 hours straight! Today flying drones at computer terminals, airmen from Whiteman can bomb Afghanistan without missing a coffee break; they can sleep in their own beds. The killing in Afghanistan continues from Whiteman on the cheap for the government, but the costs to people on the ground, here as in Afghanistan and in the ever broadening war of terror, is still exorbitant and dire.

Georgia and Kathy are expected to go to trial at a later date set by the court.