Summary: This is a good book with excellent material. 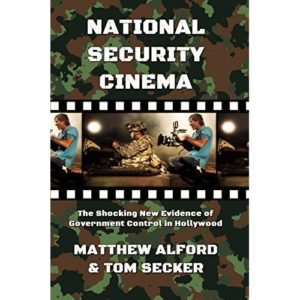 It’s well established and not even a secret that Hollywood gets logistical support, advice, and even rented military equipment from the US Department of Defense. Even as far back as D.W. Griffith’s Birth of a Nation (1915), the Home Guard provided hardware filmmakers. In 1948, the Pentagon (established in the previous year) set up the Entertainment Liaison Offices (p. 3) to ensure that Hollywood didn’t paint the military in too bad a light.

But, other than the obvious reasons, why would the military want to do this?

Entertainment can be used (and has been used for centuries by church, state and business) as a subtle propaganda weapon. The US is unusually dependent on what President Eisenhower famously called the ‘military-industrial-complex’ for its high-tech economy (the internet,  cell phones, camera drones) and oil/banking guarantees (Full Spectrum Dominance, as the Pentagon calls its doctrine for global control). It is a logical step that corporations (including Hollywood production companies and TV firms) would have a mutually beneficial relationship with the system.

But more than this, they—the big studios and production companies—are part of the system (the CBS-Westinghouse financial ties, for instance). The Pentagon underpins the US hi-tech economy at home and acts as a guarantor for business abroad by smashing up the third world. Via Hollywood, the Pentagon is selling elite interests to non-elite audiences. The proof comes from a wartime memo from the CIA’s forerunner, the Office of Strategic Services, entitled, The Motion Picture as a Weapon of Psychological Warfare (p. 31).

Alford and Secker document the influence of the US intelligence agencies and military on shaping content and censoring Hollywood: both film and television. Their research reveals the existence of a much more ubiquitous manipulation machine than previously imagined.

Their book appears to expand on Alford’s Reel Power (2010, Pluto Press). It is based on ten years of research and took two years to write (front matter). My own interest in this topic stems from 2008-10, when I wrote an unpublished manuscript (Hollywood’s War on Terror), in which I document propaganda and censorship (such as the removal of references to ‘Arab oil’ in the final cut of the film Jarhead (2005), which is set in Saudi Arabia and Iraq during the first Gulf War (1991). Indeed, jarhead turned out to be an industry term relating to oil spigots.) I also found that Participant Media (e.g., Syriana (2006)) is (or was) little more than a front for the US State Department. At least in 2008/09 (I haven’t checked the links recently), one could click on the various charities and aid agencies on the company’s website and donate to them (hence you ‘participate’); but if you kept clicking, you were led to the US State Department which funds ‘aid’ (a.k.a. investment) in poor countries.

In addition to the above, I know one of the authors (Alford) personally, as he reviewed my book, Britain’s Secret Wars (2016, Clairview).

With my interests declared, let’s return to their book:

Initially, the authors believed that the US Department of Defense had assisted in the production of approximately 200 feature length motion pictures in Hollywood. ‘How ignorant we were’ (p.1). More research, much of it obtained through Freedom of Information Acts and emails to the Pentagon itself, suggests that between the years 1911 and 2017, 814 films received support in one form or another from the US military.

The authors make it clear that they ‘are not claiming that it [the national  security state] is the most important factor in shaping the politics of Hollywood’ (p. 179.). One of the many factors is product placement. America has a big gun culture and the authors include a still of films with captions reading, for instance, ‘John Travolta … with a large product placed gun’ (p. 186). Market pressures are another. When Warner Bros. president Lorenzo di Bonaventura was asked why he doesn’t make more intelligent films, his response was: ‘every time you do, you get slaughtered’ (financially speaking, of course. Quoted in pp. 189-90.)

Perhaps the most interesting aspect of the book is the revelation that television entertainment, even many shows that have nothing to do with the military, has also been significantly influenced by the so-called security state. The authors identify 1,133 programmes, many of which appeared from 2004 to 2017 alone.

But it’s not just generic influence, such as lending producers military equipment or advising them on how to realistically stage a battle. Rather, the US military and intelligence services have actively sought to influence content and in many cases censor projects. ‘Primarily, the Pentagon’s role [in Hollywood] is … [to] manipulate existing scripts’ (p. 11). The authors cite historical evidence for their claim, such as The Green Berets (1968), where the Pentagon requested that all references to Laos be removed due to so-called sensitivity issues, namely that in reality the US had been carpet bombing the neutral country.

Other examples provide comic relief, as in the case of the Pentagon demanding that

a murdered character in the James Bond film Goldeneye (1995) have his nationality changed from American to Canadian, or where the Pentagon expressed concern over Cher’s ‘vulgar black leather thong-type of outfit’ (as they called it) for her nautical video, If I could turn back time (1989) (p. 19). 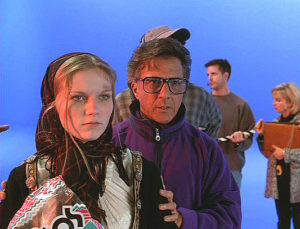 Fake news in Wag the Dog.

For those who don’t know much about the details and dynamics of how Hollywood influences film, the book includes a large number of case studies, including Charlie Wilson’s War (2008), which ‘minimis[es] the scale of Operation Cyclone’, a US-British terror operation involving around 20,000 jihadis (see John K. Cooley, Unholy Wars) organised to bring down the Soviet Union (p. 80).

Others, including The Interview (2014) to Rules of Engagement (2000), advocate everything from the assassination of foreign leaders portrayed as cartoon villains (Kim Jung-un) to the wholesale slaughter of innocent civilians (Yeminis).

The authors’ analysis of the film United 93 (2006) includes an overview of why the official 9/11 story ranges from questionable to absurd (pp. 134-42). If readers have difficulties with this section of the book, it’s their problem because the official story is full of holes and we should be honest enough to face that. A serious content analysis should include factual information in the presence of  contradictory or non-factual theory (i.e., the official account).

The authors’ analysis of Patriot Games (1992) documents the real-world infiltration of Irish Republican Army groups by the British state and the latter’s use of violence to achieve its aim of crushing republicanism—all omitted from the film, of course (p. 152).

As with any book, some of the assertions are questionable, such as the idea that during his time in Hollywood, Paul Verhoven made films ‘combin[ing] big stars, costly and innovative visual effects with radical narratives that challenge the status quo’ (p. 178).

It is worth recalling that Hollywood movies (not necessarily television) is aimed at audiences aged 18-35, particularly the more action-packed films analysed by Alford and Secker. Should we therefore contextualise any potential Pentagon influence as being largely confined to a certain age group which has a ‘natural’ proclivity toward the bloodiness and buddiness (the two core elements of a ‘good’ war film)?

Finally, we should ask, is there a way to measure the effectiveness of Hollywood propaganda? Could the findings by correlated with spikes in public opinion polls, for instance, which show rising support for wars at certain times (e.g., when certain films are released)?

Moving on back to its finer points: The book also examines the role of the CIA in Hollywood.

For a brief period in the ‘60s and ‘70s, under the direction of Richard Helms, the CIA supposedly relaxed its attitude to Hollywood (according to the authors), allowing such films as Scorpio (1973) and Three Days of the Condor (1975) to allegedly show the agency in a dim light. (p. 37).

However, the authors point to nuance in this apparent first reading. It is also worth remembering that this was at a time of heightened political terror, when the CIA (Operation Chaos) and FBI (Cointelpro) were murdering Americans and spreading rumours about everything from Kennedy, to Reds under the bed, to aliens. (For an excellent analysis of Hollywood and UFOs, see pp. 233-43n42 of Alford and Secker’s book). Portraying themselves through a Hollywood glass darkly might have been an unsubtle message on the part of the CIA, that the Agency is not to be messed with.

The book also discusses the OSS and its CIA successor’s role in early Hollywood; how through  various levels it and its associates manipulated the Production Code Administration of the Motional Picture Association of America.

Yet, the authors succeed in keeping the information up to date and relevant, writing for example: ‘The 2017 Intelligence Authorization Act is the first to require that the Director of National Intelligence, ‘issue, and release to the public, guidance regarding engagements by elements of the intelligence community with entertainment industry entities’’ (p. 60). So much for Obama the liberal and Trump the non-internationalist.

Turning to TV, where the book gets really interesting, we find that the Pentagon  has manipulated seemingly innocent programmes ranging from American Idol, the X-Factor and America’s Got Talent to Big Kitchens, Masterchef and Cupcake Wars (pp. 20-21). The authors argue that the Pentagon footprint on these productions is likely designed to show the organisation in a good light (e.g., helping with food preparation) more than as a more nefarious psychological tactic to, say, promote competition (the significance of the title Cupcake Wars).

Perhaps audiences are more susceptible to film and entertainment propaganda? Polls suggest that trust in mainstream news has declined. Others suggest that Americans now trust comedy news shows (like those hosted by John Oliver and Stephen Colbert) more than ‘serious’ news. Could it be that subversive Pentagon activity shifted to television in light of this, or has it always been the case?

The authors conclude by urging Hollywood to take a more critical approach to filmmaking. More generally, they advocate a kind of  democratization of Hollywood, which could only emerge from a more participatory society. For me, the best parts of the book are the Appendices and footnotes (pp. 195-255). These reveal the enormous amount of work that has gone into the book and they give readers the objective facts. They consist of lists of TV shows influenced by the Pentagon,  raw documents (such as memos) and more. However, for readers who prefer not to trawl through original documents and footnotes, the main text is well-written and full of information.