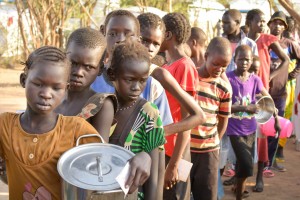 In today’s political climate, many of us are so caught up in our Anglo-centric view of the world that we fail to see current affairs from a global perspective. While the issues facing western countries may seem significant, sometimes we need to look to developing countries to gain a relative idea of an event’s importance. In both North and South Sudan, Civil War is devastating the lives of millions of people. The people currently face huge hardship partly brought on by their government’s disregard for the human rights of their citizens.

Darfur is a region encompassing five states situated on the western side of The Republic of Sudan. Conflict started in Darfur in 2003 between rebel groups and the Sudanese government. The rebels, Justice and Equality Movement (JEM) and Sudan Liberation Movement (SLM), accused the government of persecuting the non-Arab population in Darfur and the government of President Omar Al-Bashir reacted by killing hundreds of non-Arabs.

The Sudanese military, police and militant group Janjaweed have targeted not only the rebel groups JEM and SLM but also any local populations that are perceived as supporters of the government opposition. Many villages have been destroyed and hundreds of thousands of civilians have been killed, either through war or by the starvation and disease that runs rife.

In 2016 the government began launching attacks on the Jebel Marra region and evidence has emerged of chemical warfare being waged on 32 villages in the area. Amnesty International have started investigating the atrocities, interviewing local people and taking satellite images of villages affected by bombing. They estimate over 200 people have died from exposure to chemical weapons, a high percentage of which were children.

Over the border in South Sudan more conflict is causing further suffering. Since breaking away from Sudan in 2011, South Sudan has seen its own civil war.

In December 2013, the president Salva Kirr accused his vice president Riek Machar of attempting a coup. This sparked a conflict that began between warring political factions but has taken on ethnic undertones with President Kirr’s tribal group, Dinka, and Mr Machar’s tribal group, Nuer, pitted against one another.

Just over two years later and the full consequences of the conflict have reached a head. Inflation rates have reached 800% in the country, food prices have shot up and become unaffordable for many people. A famine has been declared in parts of South Sudan’s Unity State with more than 100,000 people facing starvation and another million on the brink of famine.

It has been described as a “man made” famine; it isn’t the result of a draught or a flood, it is result of conflict making farming impossible. South Sudan is generally a fertile country and in peacetime could be self-sufficient.

Providing humanitarian aid isn’t easy. Not only are the South Sudanese government allegedly stopping food supplies from being delivered to certain areas, it’s hard for UN agencies and other organisations to coordinate the distribution of aid when there is uncertainty over who controls certain areas of the country.

Meanwhile in Britain, the media is concerned about shortages in lettuces and courgettes on supermarket shelves. The cause is bad weather and the result is a restraint being put on bulk buying of certain vegetables. In response to the “crisis” a customer told Daily Mail that he “felt angry” and suggested looking “further afield to places like Africa” if there were shortages.

It would be tempting to dismiss this reaction as an isolated case of ignorance and self-interest, yet how many of us can really claim to be well informed about the pressing humanitarian issues destroying lives around the world?