Chemtrails: How in the World Are They Spraying?

Chemtrails are chemical trails released in the troposphere and/or stratosphere by unmarked jet aircraft under military control. Most of them are white, some are black. Unlike most condensation trails (contrails), chemtrails are laid in patterns impossible for commercial jets. They appear in all atmospheric conditions at all times of the year—in contrast to persistent contrails—and, like contrails, can linger for hours, hazing blue skies to white.

‘Chemical and other techniques to mitigate deleterious ionization effects on GPS transmission will be tested and evaluated in FY97-99 … Measurements of effluent plumes and chemical clouds by ground-based and airborne Lidar will continue through FY99 … [Department of Defense will] Develop accurate and validated cloud and weather simulation for any world-wide location to support acquisition, training and war-gaming’.1

The date correlate to a US Congress budget allocation to the US Army and Air Force for a programme called ‘owning the weather’, published in 1996. To quote the budget report:

‘USAIC&FH [US Army Intelligence Center and Fort Huachuca] sponsors the Joint Army/Air Force tactical weather concept, which embraces the “Owning the Weather” initiatives of the Army Research Laboratory’s Battlefield Environment Directorate. These TRADOC [US Army Training and Doctrine Command] concepts describe how weather support to the future Army will be provided. They also describe the employment of IMETS [Integrated Meteorology System] with its capability to integrate information from national and indigenous sources to provide a 3-D of weather and environmental effects on and above the battlefield’.2 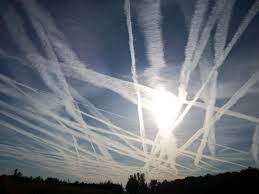 ‘since 1999, members of the public in Canada and the USA have been complaining about the growing presence in the air of aircraft condensation trails of a new type, which sometimes persist for hours and which spread far more widely than in the past, creating milky veils which are dubbed ‘aerial obscuration’, and that the new type has particularly come to people’s attention because it is so different from the short, pencil-thin white contrails which have been a familiar sight ever since jet engines came into use’.3

The dates (i.e., the late-1990s) correlate to the documented Pentagon programmes. 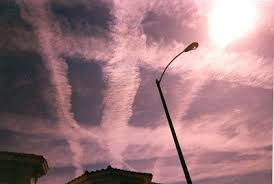 HOW THEY DO IT

The aeroplanes involved are non-commercial. They use afterburner jets. In the 1970s, the US National Aeronautical and Space Administration (NASA) tested the possibility of deliberately creating condensation trails with JP-4 jet fuel and no chemical additives. The author wrote:

‘The Sabreliner aircraft has twin jet engines each capable of consuming 1200 lb hr-1 of fuel. In the contrail experiments we used an engine setting which gave total fuel consumption rate of 1500 lb hr-1 and an indicated airspeed of 180 kt. Partial approach flaps were applied to jeep the aircraft level at this slow speed’.4

In other words, the jet was flying slowly in order to burn more fuel and generate more heat. The purpose is to raise the relative humidity levels to make the air conducive to contrail formation and persistence.

Scholars understood that adding chemicals to afterburners would give water vapour a substance to adhere to and thus persist in atmospheres where contrails cannot usually persist, unlike the above study, which chose an area known for contrail persistence, i.e. a mountainous region.

‘a liquid fuel, in which barium salts are dissolved, and a high energy oxidizer which spontaneously ignites the fuel on contact. The barium release is accomplished by impinging fuel and oxidizer jets in an open-ended combustion [sic] chamber which expels the reaction product gases or plasma and which includes the desired barium neutral atoms (Ba°) and barium ions (Ba+) as individual species’.5 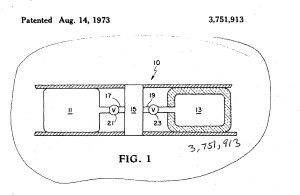 It would be used in the upper atmosphere in order to detect electromagnetic radiation.

Others combined the idea of heat-generation, which could be attained by afterburners, and chemical additives. ‘An afterburner is in effect a ram jet added to a turbine jet engine’, write Gray et al. in a 1974 academic study for the University of Colorado.

‘[we could use] existing afterburner equipped jet engines with relatively simple modifications … Use of afterburner type jet engines to generate carbon directly. This alternative was considered by far the cheapest, most effective, most convenient, and safest alternative … An ideal aircraft would be a B-52 with its 8 afterburner engines, 4 of which could be modified. Some re-piping of the fuel tanks would also be required. During take off all engines would be used in the normal manner. In the air 4 engines would be switched to carbon production … We have concluded that by slightly modifying readily available jet engines carbon dust particles could be produced and dispersed into the air at a rate of 20-30,000 pounds per hour per engine’.6

Gray et al.’s illustration of where carbon would be stored before being vaporized by afterburners.

In 2010, The Regulation of Geoengineering was published by the British government. Minister of State for Climate Change, Joan Ruddock, revealed that ‘there has been work on low level cloud development, which … has some Government funding’.7 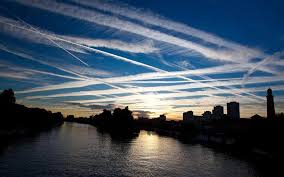 In the previous years, scholars and engineers proposed methods for cirrus-cloud creation. John C.D. Nissen is quoted here as mentioning two of three geoengineering techniques in a proposal to the UK government preceding its ‘low level cloud devleopment’: ‘main candidates include: 1) creating stratospheric clouds – using precursor injection to generate aerosols; 2) creating contrails – using an additive to aircraft fuel’. Another submission from chartered engineer John Gorman, says: ‘it would be nice to investigate the possibilities of injecting the fuel/additive mixture into an afterburner’, referring to silica.8 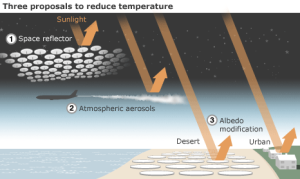 Illustration from a BBC report on proposed geoengineering depicting a plane spraying.

‘The primary disadvantage of operating in the Mariana Islands is the large distance from the continental United States. If long lead time planning were accomplished, the Mariana Island location should prove to be satisfactory. Military transportation is available on a low priority basis. The primary disadvantage of the Florida Keys site is the large recreational tourist industry in this area. Precautions would have to be taken to avoid conflicts with private fishing boats in the dispersal area on test days. However, a large portion of the sea area likely to be affected is a U.S. Navy and Air Force operational training area subject to their control. This should facilitate coordination of the testing with local interests … The required raw material will have to be supplied in tank cars or tank trucks since the consumption will be large. (This does not apply to early stage testing wherein drums might suffice.)’9

This tells us that 1) the military would be involved in any chemtrail operations 2) the operations would not be disclosed to the public 3) the chemicals would be transported by tankers, presumably to secret and/or secure military bases.

In 2001, retired US Air Force sergeant Gene Shimer, who had served for four years in the Korean War as a radar technician, contacted the Military Operation Control at Travis Air Force Base in Fairfield. ‘I said, ‘What would you say if I said there are three aircraft up there right now.’ I said, ‘Are they there?’ He [the controller] said, ‘No. They are not there’’.10

This author contacted the Plymouth UK radar station in 2012 to report the presence of four jet aircraft, which the operators denied.