Climate Change Challenges: Support the Environment or the U.S. Military? 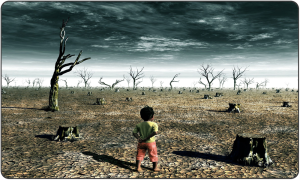 Having lived through the 1991 Desert Storm bombing and the 2003 Shock and Awe bombing in Iraq, I tread carefully when speaking about any danger greater than war that children in our world might face.  I won’t forget children in Baghdadi hospitals whose bodies I have seen, wounded and maimed, after bombing campaigns ordered by U.S. leaders.  I think also of children in Lebanon and Gaza and Afghanistan, children I’ve sat with in cities under heavy bombardments while their frightened parents tried to distract and calm them.

Even so, it seems the greatest danger – the greatest violence – that any of us face is contained in our attacks on our environment. Today’s children and generations to follow them face nightmares of scarcity, disease, mass displacement, social chaos, and war, due to our patterns of consumption and pollution. Ironically, one of the institutions in U.S. society which comprehends the disasters that loom is the U.S. military.

In the past few years, the Pentagon has issued several reports which concur that the greatest threat to U.S. national security is posed by climate change and potential environmental disasters.   The reports show concern about how droughts, famines and natural disasters could cause conflicts leading to “food and water shortages, diseases, disputes over refugees and resources and destruction by natural disasters in regions across the globe.” The reports don’t acknowledge that the U.S. military has commandeered vast resources, in terms of money and scientific “know-how,” that are acutely needed for use in solving our global crisis.  These resources are steadily directed toward developing more weapons and fighting more wars.  What’s more, the U.S. military, with its more than 7,000 bases, installations, and other facilities, worldwide, is one of the most egregious polluters on the planet and is the world’s largest single consumer of fossil fuels.

Its terrible legacy of forcing its own soldiers and their families, over decades, to drink lethally carcinogenic water on  bases that should have been evacuated as contaminated sites is covered in a recent Newsweek story. Civilians drinking from wells around hundreds of U.S. military bases abroad can fare little better.  In January of 2004, I visited a former Iraqi Air Defense Camp in Baghdad. Following the US led invasion of Iraq, at least 400 families moved into this camp. It became one of several similar vacated and bombed areas that were “squatted’’ by desperate people who preferred eking out an existence amid the wreckage to whatever misery they had left behind. 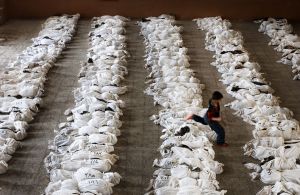 Hundreds of Iraqi children liberated of their lives.

The children in the camp were  among the most endearing human beings I have ever encountered. They were shy, but smiling, friendly, and incredibly well behaved. The collapsed buildings and mounds of debris didn’t seem to faze them, any more than the rusted tubes of the missiles that had collapsed the buildings. Several of these little builders worked industriously atop hills of rubble, their tiny hands digging for intact bricks. They would bring the bricks to their parents who used them to build new housing walls. At least a dozen of the children had large red spots covering their faces. It could be that they had been bitten by fleas or suffered from scabies.   But we couldn’t help but wonder if they had been affected by contaminants from the bomb parts. A proper needs assessment of this new housing area should have been undertaken right away.  The new ‘‘householders’’ needed access to clean water, medical care, a clinic and a school. They needed peace. The world needs peace in order to address catastrophic changes that are fast approaching us.  Yet, the U.S. public is seldom encouraged to link actual security with cooperative, diplomatic efforts to promote fair exchanges of resources.

Consider, for example, the U.S. military’s Asia Pivot strategy which aims to encircle China with military bases and threaten China’s ability to import and export resources.  Any rational plan for changing human consumption and pollution patterns should surely view China as a foremost global partner in devising new ways to halt global warming and negotiate fairly over consumption of resources. The Asia Pivot plan instead reflects U.S. insistence on competing with China by controlling the pricing and flow of valuable minerals and fossil fuels found in the region.  It also seems to motivate U.S. determination to maintain at least nine U.S. military bases in Afghanistan, all the while insisting that the U.S. must have complete legal immunity against any Afghan government claims that the U.S. military has poisoned Afghan air, soil, or water. To “market” such a plan, U.S. politicians and military planners must encourage the U.S. public to feel fearful and competitive. 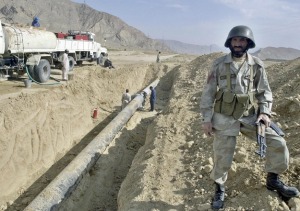 Our fears and the longing for comfort, for status, which drives our consumption, blend seamlessly, one into the other.  We want all the wealth, and we want all the security. Huddled over candles in the  terrifying nights of the U.S. “Shock and Awe”  war to “liberate” Iraq, shuddering from the thudding roar of the war exploding around us, my companions and I had talked about how we must work, in the future, not only to help rebuild Iraq but, even more crucially, to rebuild ourselves, our way of life.  We wouldn’t try to live forever at the expense of neglecting or killing our neighbors, including their children.  We would find ways to prevent a shockingly undemocratic U.S. from maintaining a vast military machine in constant short-term pursuit of either our exclusive wealth or our exclusive security. Guided by the earnest resolve of the hopeful children moving one brick at a time amid the rubble, we’d work to build and be a better world.