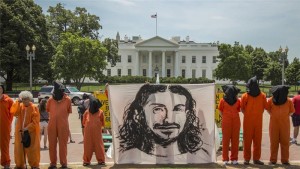 A dozen people protest outside the White House for Tariq Ba Odah.

Here in Kabul, young friends with the Afghan Peace Volunteers look forward to learning more about “The Tea Project” in late December, when Aaron Hughes arrives, an artist, a U.S. military veteran, and a core member of Iraq Veterans Against War. He’ll carry with him 20 plaster replicas of a standard-issue, factory-made Styrofoam cup. They’re part of a set numbering 779 replica cups, each cup dedicated to prisoners detained in Guantanamo. In the entire collection, 220 of the cups bear names of Afghan citizens imprisoned in Guantanamo. In Guantanamo, with each evening meal, Guantanamo prisoners are served tea in Styrofoam cups. Many prisoners etch floral designs into their cups, which become a nightly artistic outlet for men with few other freedoms allowed them. Aaron had heard a former Guantanamo guard describe how deeply he grew to deeply love the cups that had become works of art.

The cups would then be collected, each night, and turned over to military intelligence which most likely just dumped them. Aaron’s cups are more durable. A Guantanamo prisoner’s name is written on the base of every cup, and each carries a unique design. Following the practice of the prisoners, Aaron focused on etching floral patterns into the cups he created, displaying flowers that are native to each prisoner’s homeland. 220 of the cups he has sculpted bear the names of prisoners from Afghanistan. 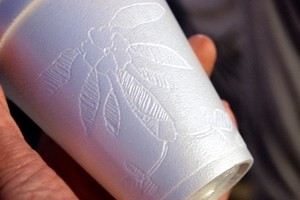 Life stories represented by each cup are reaching a wide variety of individuals and groups during Aaron’s travels on behalf of the project. He invites people to sit with him, sip tea from the cups, and talk about their stories related to war, destruction, peace, love, creativity …the conversations range freely, but the cups bring a certain focus, remembering the prisoners in Guantanamo.

I wish that Aaron could somehow sit across from Tariq Ba Odah and serve him tea. Now 36 years old, Tariq Ba Odah, a Yemeni citizen, arrived in Guantanamo in 2002, when he was only 23. Detained without charge in Guantanamo since 2002, Tariq has maintained a hunger strike since 2007. He now weighs 74 pounds. His lawyers say that he visibly suffers from severe effects of malnutrition and is at serious risk of permanent physical and neurological impairment and death. Tariq Ba Odah endures horrible force feeding rather than cooperate with the system that has separated him and the other prisoners from loved ones, subjecting them to torture and dehumanizing conditions.

Witness Against Torture activists from the U.S. focused on Tariq Ba Odah’s life in Guantanamo when they set up their encampment, in late November, 2015, in Cuba, outside the U.S. naval base. Like Aaron, they feel great empathy for the people imprisoned in Guantanamo, along with responsibility to keep educating U.S. people about the plight of 47 prisoners still held there. The delegation demanded that the prison close. They reject a new plan being developed by the Obama administration which would move the Guantanamo prisoners to prisons in the U.S., some still to be held indefinitely without charge or trial.

“Simply moving Guantanamo is no solution,” says Helen Schietinger of Washington, D.C. “That would mean holding on to the barbaric practice of indefinite detention. Besides, the entire domestic system of “correctional’ institutions is a travesty, poisoned by racism. We need to overhaul the U.S. justice system, not add Guantanamo to it.”

Enmanuel Candelario, an artist from New York, spoke bluntly about the base itself, calling it “an unwelcome symbol of U.S. power, which houses a torture chamber.” We can’t directly nourish Tariq Ba Odah or bring him the consolation and affection for which he must also be starving. But together we can invite people to slow down and think about their actual circumstances and relationships with supposed enemies. We can help dismantle the terrible Islamophobia and fear that keeps many people in the U.S. imprisoned in the reckless grip of war makers.

When Aaron arrives in the Afghan Peace Volunteer community, he will sit with the young volunteers as well as the child laborers who are part of the Borderfree Street Kids School. He’ll also connect with local artists. While here, he hopes to serve tea and converse with people in a variety of places.

The conversations will very likely stir up questions about the 220 Afghans who were imprisoned in Guantanamo, as well as Afghans detained in the ‘Afghan Guantanamo’, Bagram Prison. I asked friends in our community here what kinds of questions they hope might be raised. Here are two responses: “Prisoners of the U.S. military – are they people who can create and enjoy art?” “Do they love?”

Kathy Kelly co-coordinates Voices for Creative Nonviolence (www.vcnv.org). While in Afghanistan, she is a guest of the Afghan Peace Volunteers (ourjourneytosmile.com).