A group of activists from Glasgow Palestine Action network have today shut down Thales UK, the weapons systems manufacturer, in Govan, Glasgow. 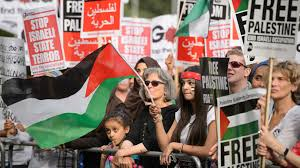 The activists climbed onto the factory roof, and blocked the doors, during the early hours of the morning and are planning to remain as long as possible. Activists are blockading both entrances, lying on the ground attached to arm tubes, and are occupying the roof.

The action is in response to the recent Israeli bombardment of Gaza, and the UK economy’s ever growing military industrial cooperation with governments that flout international law. In just over 7 weeks, Israel, armed with weapons supplied by the UK, killed more than 2000 innocent Palestinians.

Thales is being targeted today for their close relationship with Elbit Systems, Israel’s largest military company and the world’s largest drone producer. In a joint venture, Thales UK is working with Elbit Systems to make the next generation of ‘Watchkeeper’ drones, a contact worth £1 billion. These drones are based upon the Hermes 450, which was documented killing Palestinian civilians in Gaza in 2008-2009. The drones are marketed as ‘field tested’ – which means they have proven effective at killing Palestinians.

Fifi O’Hara, one of the roof occupiers, explains: ‘Drones are a key part of Israel’s military arsenal. By allowing this factory to export drone components and other arms to Israel, the UK government is providing direct support and approval to Israel’s massacres’.

Speaking about Scotland, Latrice Royale said: ‘The UK government, and by allowing Thales to operate with Elbit systems, have blood on their hands. Last year alone the UK government had 381 ex​port​ arms licences to Israel, worth almost £8 billion. We demand that the Scottish government puts pressure on the UK government to end arms sales to Israel and takes active steps towards ending the production of weapons systems in Scotland that are connected to apartheid, colonialism and genocide. Another Scotland is possible!’