By Michael J. Murphy and the Plymouth Institute for Peace Research (PIPR) 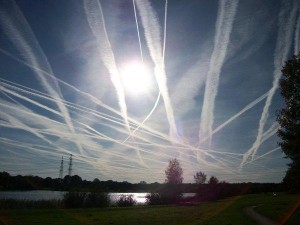 PIPR: Congratulations on the new film. What’s it called and how did you choose the title?

MM: The Title, “An UNconventional shade of Grey” was actually one of the most difficult parts during our “current” production of the film. Because the film is a call to action film based on our current geopolitical crisis in regards to the planned global climate treaties and agreements that will most likely lead to the legalization of geoengineering. A main goal of the film is to expose the irrefutable fraud of the climate change agenda based on the following: 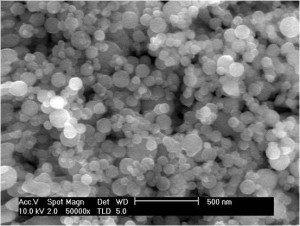 In geoengineering models, aluminium nanoparticles act as a cirrus cloud formation stimulants. The particles are too small for average analysers to detect.

The IPCC Climate Model is flawed and fraudulent due to the fact that the geoengineering practices that have been ongoing for over 60 years have not been included in the model. The stated purpose of the geoengineering programs is to “change the climate and manipulate the weather”, therefore, there can be no accurate, definitive statement made that the planet is warming, cooling or in the midst of Climate Change due to Co2. To make such a statement allows the continuing of the destructive geoengineering programs, the deception surrounding them and the further misleading of public opinion. 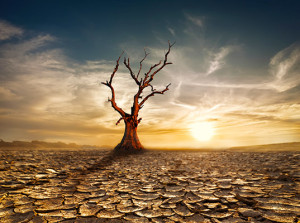 Droughts in the West, floods in the East.

Because these expected agreements are largely United Nations-based and are expected to be signed by several nations during a climate meeting in December 2015 in Paris France, the name “Unconventional” seemed to be most effective for explaining the climate change conventions that are largely pushed by the United Nations and other world government organizations. Also, because we are the first to expose geoengineering as the source of most of our climate change, it is also a very unconventional way to look at the issue.  The “Shade of Grey” stands for both the changing and greying of our atmosphere due to geoengineering programs as well as the darkness or deception that is surrounding the politics in the regards to the climate change agenda. While I was hoping for a shorter title, this title seemed to simplify a very complex issue in just a few words.

PIPR: The film will be set in Hawaii. How do the artificial cirrus clouds generated off the coast of Hawaii differ to those generated elsewhere? Are these sprayed from ships instead of jets? 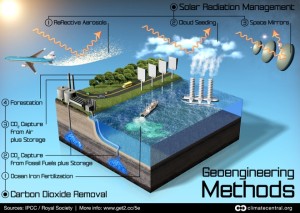 Aerosol dispersal is the most favoured method of Solar Radiation Management.

MM: What we are seeing on a regular basis in Hawaii in terms of geoengineering is very different than what most people are witnessing over land. While we do see trails over the islands on occasion, over land, it is common to see airplanes dispersing aerosols leaving the long lingering trails that are now an everyday occurrence. Over the Pacific and other oceans, we are often seeing what many are calling “chem-bombs” A chem-bomb is an aerosol explosion that is originating from ships on the ocean. A machine that produces artificial clouds is placed on the deck of boats. We have witnessed boats in the Pacific producing artificial clouds from the deck. After the artificial clouds have been dispersed, they rise into the upper atmosphere and turn into the wispy clouds that we commonly see the trails from chemtrails turn into.

PIPR: The idea of sea-based aerosols is not so far-fetched. From the 1940s to the late ‘70s, the UK Ministry of Defence intermittently spread chemicals over southwest England as part of its Large Area Coverage Trials. How exactly are you going to get a plane up there and collect samples?

MM: As discussed in the trailer, we are planning on watching satellites for several days and when these programs are identified and actively taking place, we will be taking an airplane into the chem-cloud, taking a sample via collection device and determining exactly what is being dispersed from these boats after our lab tests for the primary ingredients of geoengineering programs. This is very important and will change the course of our movement because it will be taking away the common plausible deniability that our scientific community and government officials use when they state that the trails we are seeing are simply condensations trails.

PIPR: Are you worried?

MM: I am not worried about my work and the process of further exposing the illegal and insidious programs, however, I am very concerned that geoengineering programs have been ongoing for several years and also concerned about the plans for a global climate agreement in December that most likely will legalize geoengineering which in turn will most likely make it impossible for us to take legislative and legal action. I am not at all concerned about the atmospheric test because it is a critical part of taking action towards getting these programs stopped. I am very excited about the evidence it will give us to accomplish our goals to get geoengineering stopped. 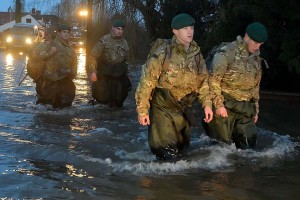 Problem, reaction, solution: the military secretly cause/exacerbate disasters and move in to ‘help’.

PIPR: What is the connection between global, social control and climate change laws and regulations?

MM: Climate change legislation, if passed will create global governance. Because of this, it will circumvent many national/state laws and allow an unelected body (The IPCC) to micro-manage our lives through taxation, regulation and complete control.  This is a potential multitrillion dollar agenda that will transfer and enormous amount of wealth into the hands of a few at the expense of many. It will also create various mandates which most likely will include dictating what appliances we use, how much energy we use and if and when we can even drive our cars. This is an agenda to create global governance where corporations through policy dictate our lives. 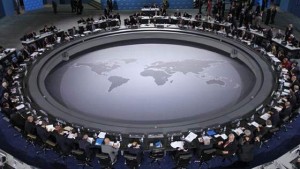 PIPR: What’s next for the film?

MM: I am planning on attending the “Our Common Future Under Climate Change” meeting in Paris France in July. This meeting is expected to address specifics about the planned climate agreement in December.  I will be learning what specific mandates; legislation and other initiatives are planned for the agreements.  We, of course, will be interviewing many scientists as well as filming during the talks if allowed.  Because this is the most important discussion in the history of world politics, it will be a key part of “An Unconventional Shade of Grey.” My hope is that this and other information learned during this meeting will help us in forming lawsuits and other courses of action to get geoengineering stopped.

Michael J. Murphy is President of the Coalition Against Geoengineering and an Honorary Member of PIPR. An UNconventional Shade of Grey can be supported at www.unconventionalgrey.com