Predators, Near and Far: Kathy Kelly on Drones and Food Insecurity in Afghanistan

Kabul—Some days ago, at the Afghan Peace Volunteers’ Borderfree Center, I met Jamila, the mother of a little girl, Fatima, who comes to the Street Kids School, a program designed to help children working on the streets go to school. Jamila, a young mother of seven, smiles and laughs easily, even though she faces dire circumstances here in Kabul.

Nine years ago, at age 19, she fled escalating conflict in Pul e Khumri, located in the northern province of Baghlan, and moved to Kabul. Jamila had already been married for 12 years. Her family, desperate for income, had sold her in marriage to an older man when she was seven years old. As a child, she lived in servitude to the family of her future husband, earning a small income for them through sewing and embroidering.

At age 13, She gave birth to her oldest daughter . With her when we met were two of her middle daughters, Fatima and Nozuko.  Her oldest daughter is no longer with her, as, at age 12, she was given away, six years ago now, in marriage. Jamila is determined not to give her remaining daughters away in marriage while they are still children.

One and a half years ago, Fatima, then aged 9, developed a fever which lasted for about a month. All four of her limbs became paralyzed.  In a hospital at Wazir Akbar Khan, doctors said she was 10 minutes away from death. They treated her for typhoid meningitis and hospitalized her. After a month, the doctors said she was not ready for discharge, but Jamila had other children to take care of and had already incurred huge debt. The doctors made her sign a form saying they were not responsible if Fatima died.  They said Jamila must continue with twice-a-day injections of strong antibiotics.

After being discharged from the hospital, Fatima continued receiving the injections for a year and a half until, one day, about three months ago, Jamila abruptly stopped giving Fatima the injections. When Fatima developed a fever, Jamila became panicky again. Fatima finally ended up in a private hospital whose initial tests cost 3,000 Afghanis (about $50 U.S. dollars).  Jamila begged loans from her sister, her uncle and her cousins to pay for the lab tests.

Doctors told Jamila that Fatima needed the injections because the typhoid bacteria were in her blood. At this point, Jamila, facing a debt of 140,000 Afghanis (about $2333 U.S. dollars ), finds it hard to sleep, worrying for Fatima and her other children. How will she pay her debts?  How can she buy flour to make bread so that the children have something to eat?  Her only means of income is through washing clothes.  The people she washes clothes for say times are hard, and they don’t have any income themselves. They have only paid her twice over the past two months, once in the form of some meat and rice. 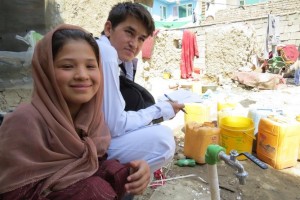 Fatima in her house, with Ali, an Afghan Peace Volunteer teacher who helped Fatima get a proper medical assessment

Jamila met the Afghan Peace Volunteers when Hadisa and Abdulhai visited her home in April this year as part of a survey designed to identify children who could participate in the Street Kids School. When Ali, a volunteer teacher at the Street Kids School, learned about Fatima’s illness, he introduced Jamila to Hakim, the mentor for the Afghan Peace Volunteers. Hakim is a medical doctor from Singapore.  Since 2004, when he first began working in Afghanistan, Hakim has recognized that the country’s health care system is riddled by pervasively corrupt practices.  Appalled by the massive doses of antibiotics prescribed for Fatima, Hakim recommended a stool sample analysis which could be done through the lab of a local hospital.  The lab report showed that Fatima no longer needed the antibiotics, that her medical condition was normal.

The medical system in Afghanistan failed to help Jamila and Fatima. Lack of oversight allowed corrupt doctors and pharmacists to over-prescribe antibiotics, and Jamila had nowhere to turn for a second opinion or for any assistance. Greedy predators, purportedly delivering health care, have steadily taken money from desperate people, like Jamila, in payment for useless or even murderous treatments.

Jamila and Fatima clearly trust Hakim.  They both looked relieved as he emphatically encouraged the mother and daughter to overcome fears about Fatima’s health.  He told Fatima that she can become strong and stay healthy by drinking clean water and having a healthy diet, including her favorite dishes of beans and chick peas. But Jamila faces another tragic health problem – she can’t even afford flour for bread, let alone nutritious but costly beans for her children.

The World Food Programme recently reported an alarming rise in food insecurity, across Afghanistan. The U.S. pours billions of dollars into surveying Afghanistan, flying Predator drones over cities, towns and roadways, claiming to better understand “patterns of life” in Afghanistan.  But the war system establishes tragic patterns of death, of poverty, misinformation, desperate insecurity, and continued despair. If she could flee her circumstances, Jamila surely would seek refuge elsewhere in the world.  But she has nowhere to turn and nowhere to hide from Predators near and far.

Young people gathering at the Afghan Peace Volunteer’s Borderfree Center long to embrace innumerable people afflicted by war who share Jamila’s seemingly insoluble problems. Thoughtfully, carefully, they’ve designed a campaign that they call #Enough! – a simple yet compelling call to abolish wars and instead work to meet human needs.  We asked Jamila if she thought her problems were connected to war.  “Yes,” she said. “War leads to poverty and because of that poverty I have had so many problems.  I hope the war will end so that I can find enough food.”

Kathy Kelly (Kathy@vcnv.org) co-coordinates Voices for Creative Nonviolence (vcnv.org) While in Afghanistan, she is a guest of the Afghan Peace Volunteers (ourjourneytosmile.com)