”You Are A Human Being”: Dr. Hakim Reports from Afghanistan

I believe in love. I don’t subscribe to any particular religion.

Feroz, a Hazara who is a Shia Muslim, lived with me in a community in Kabul with 13 other Afghan Peace Volunteers, including Tajiks and Pashtuns who are Sunnis. This is a community established with the intention of learning about and practicing nonviolence, a little like an Afghan version of Gandhi’s ashram.

One day, there were black faces and a curt exchange of words. “What meaning does praying with the little piece of stone have anyway?” Bashir, a Tajik who is a Sunni Muslim, snapped at Feroz. “Why should that bother you? It’s important to us. Your way of praying isn’t particularly good either, praying with your hands ‘closed’,” Feroz retorted. Shia Muslims like Feroz pray with their hands and arms in an ‘open’ posture, and till today, some Shia and Sunni religious leaders make an issue of it.

The ways we reach out to God should be happy endeavours, but these ways can become bones of contention, especially if they’re deemed to be special or exclusive paths to God.

For a few days, Bashir and Feroz weren’t on good terms with one another. They both said their prayers, but had the tenuous shadow of ‘spiritual correctness’ cast under them. 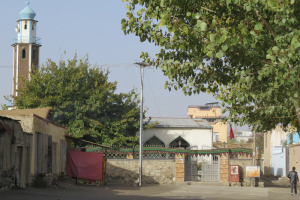 A local mosque with its minaret in Kabul, Afghanistan

On another occasion, Feroz was really upset again when he misunderstood another Afghan community member who appeared to question the validity of his faith. He was sulking and fuming in a corner of the room which I shared with him. His mind seemed to be on fire, and had taken off into some unknown ‘distance’. Distance is what religious differences sometimes wedge between the best of people. When that distance widens, it can turn into an estrangement, even an ‘enmity’.

I sat next to Ali, and encouraged him to think about the big picture.

“I can’t. I can’t. I’ve come a long way since my initial days in the community, and my view of people has shifted, but when the basic foundations of my faith are called into question, I can’t handle it. Then, I feel I want to go back home, to where I’m on familiar ground,” Feroz shared with me, his eyebrows twisted into knots of confusion, and uncomfortable anger.

The next day, he was still seething with hurt, though the heated discussions the night before were not directed at him. People tend to take matters of belief very personally. Feroz had to ventilate, so he walked into the dining room, passed a remark at the ‘offending’ youth, and stormed out.

“Feroz, please calm down. You’re not like that with me, even though I’m ‘technically’ an ‘infidel’. So, you surely can accommodate another Muslim!” I suggested, holding him gently by his shoulders. “Hakim, to me, you’re different. You are a human being! And there’s something else I’m sure of about you; you care for me.”

Dr Hakim is a medical doctor from Singapore who has done humanitarian and social enterprise work in Afghanistan for the past 10 years, including being a friend and mentor to the Afghan Peace Volunteers (http://ourjourneytosmile.com), an inter-ethnic group of young Afghans dedicated to building non-violent alternatives to war. He is the 2012 recipient of the International Pfeffer Peace Prize.